Centre for Civic Education (CCE) and Friedrich Ebert Stiftung organised today a panel discussion in CCE conference hall, titled “New initiatives for the stability and prosperity in Western Balkans”, from 17h00 till 18h30. 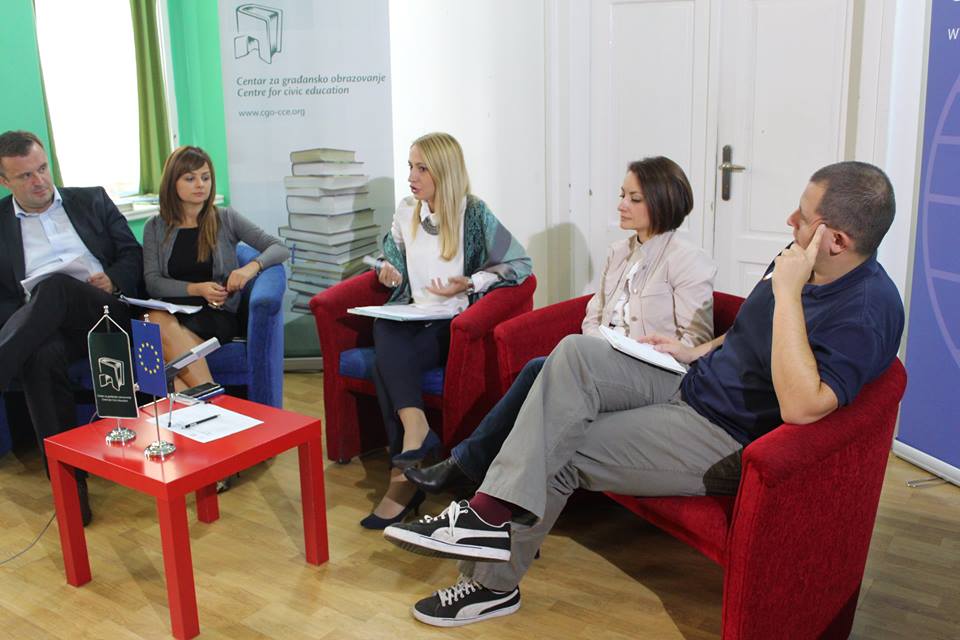 Ivana RAČIĆ, from Friedrich Ebert Stiftung, told at the beginning of panel that Friedrich Ebert Stiftung contributed to Berlin process by launching the initiative on the creation of proposal of practical policies for the purpose of improvement of economic and political situation in Western Balkan states. “This initiative was launched in cooperation with civil society representatives, representatives of academic community and decision-makers from region, Brussels and Berlin. Today’s debate is the result of these efforts to empower the role of civil society in process of European integration”, Račić stressed.

Dušan SPASOJEVIĆ, from the Faculty of Political Sciences at the University in Belgrade, clarified that basic idea was to reinitiate the discussion on democratisation and its connection to process of European integration, because as he pointed out, “we feel that there has been a stagnation in these issues, both in Western Balkan states, and in European Union”. “We tried to cope with subjects that make the core of the problem, namely with political clientelism, poor accountability of political elites and absence of transparency”, Spasojević added.

Zlatko VUJOVIĆ, from the Faculty of Political Sciences of the University of Montenegro, by discussing the role of civil sector in the creation of public policies, assessed that “the influence of non-governmental organisations in the creation of public policies in Montenegro varied from extremely big to poor, which primarily depended on political situation, or whether ruling structures required greater level of legitimacy.” He also stated that “the dialogue on public policies in Parliament of Montenegro is at an extremely low level. Negotiation between ruling and oppositional structures functions only when they need the majority for the election of members of certain bodies”. Vujović concluded by saying that “ones who suffer the most are citizens, because in these efforts we fail to form independent institutions”. He also told that “European Union provided significant contribution by strongly advocating the involvement of civil society representatives both in inter-sector bodies, and negotiating teams. However, current amplitude is not in the favour of NGOs”.

Daliborka ULJAREVIĆ, CCE Executive Director, reminded that «civil society organisations provide significant contribution in terms of the establishment of state institutions that have to be free of political influence in their work. Through the affirmation of series of public policies, opening of “forbidden” topics, initiation of affairs related to abuse of official position, conflict of interests, confiscation of public property, severe violation of human rights and freedoms, civil society organisations contribute in the institution of new democratic standards and motivation of citizens to be free in demanding, asking their rights, seeking the responsibility of decision-makers for poor results or damage made». She emphasised the need for the participation of NGOs in the process of European integration, and concluded by saying that “Citizens have to know which decisions are being made on their behalf, thus be able to take a stand in relation to those decisions, especially in those crucial for the process of democratisation and Europeanization”.

Panel was attended by 40 people, representatives of NGOs, political party activists and media, students and other interested citizens, and it was moderated by Ana VUJOŠEVIĆ, programme coordinator at the CCE.