Centre for Civic Education (CCE) believes that the efforts of local self-governments in fight against corruption are still on a unsatisfactory level and that it is necessary to address this problem in a more serious and dedicated manner, because this problem has devastating effects precisely on local level. In relation to that, the political will of local governments is of key importance, but it remains insufficiently expressed, thus aggravating any activity in this relation also for municipal officials.

Through the project “Corruption on local level – zero tolerance!”, which the CCE implemented in cooperation with Institute Alternative (IA) from Podgorica, NGO Bonum from Pljevlja and NGO Nada from Herceg Novi, among other issues, numerous problems were emphasised that take place during the creation of local action plans for the fight against corruption (LAP), their application and reporting. Municipalities were not proactive in this area, and they literally followed the model of harmonised action plan for the fight against corruption in local self-government and copied activities, thereby entirely ignoring real needs of certain communities and citizens. Also, municipalities did not precisely envisage the means for realisation of each activity contained in plan within local budgets, which raises the issue of their initial readiness to even implement these activities if no means were even allocated for the same. Reporting on the level and quality of realisation remains unstandardised and uneven, which additionally complicates the monitoring of performance in this area.

CCE reminds that municipalities Rožaje and Ulcinj have never adopted action plans for fight against corruption on local level for 2013-2014, thereby showing no interest whatsoever for dealing with specific problem regarding the corruption and functioning of local self-government. Additionally, newly founded municipalities Petnjica and Gusinje, although they adopted first budgets, they have not adopted local action plans for 2014. So, out of existing 23 municipalities, 19 adopted actions plans for 2014, which makes 83% of municipalities, and an improvement can be seen in that area, compared to some previous years. Nonetheless, it should be reminded that by not adopting LAP, municipalities have directly prevented the activity of Action plan for chapter 23, related to the adoption of LAPs, from fully realising in accordance with deadline envisaged, which was by the end of 2013. 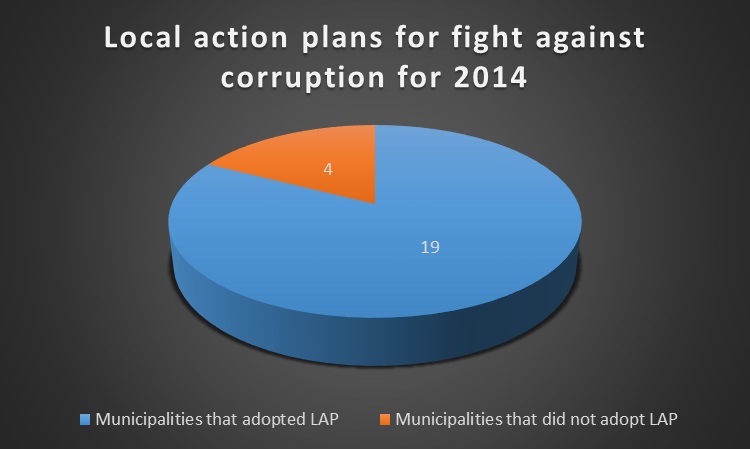 In addition, when it comes to transparency, it remains unclear why some municipalities, even though they regularly update their webpages regarding various activities, still have not posted LAP for period related to 2014. In total, 7 municipalities (30%) did not post their LAPs, nor draft LAPs, and those are: Berane, Kolašin, Žabljak, Ulcinj, Petnjica i Plav, while municipality Gusinje still does not have its web presentation. CCE assesses that the information on LAP for the fight against corruption are of same importance as other municipality activities and that they have to be posted in a timely manner, so that they could be available to citizens at any moment of the year to which it relates. 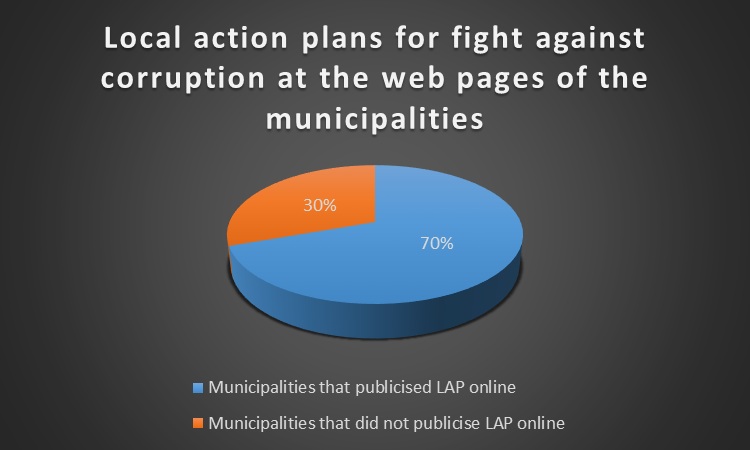 CCE believes that it is necessary, on a local level, to strengthen existing and initiate new mechanisms for the fight against corruption with full respect of civil sector recommendations, so that this process could produce measurable and sustainable results.

During 100. Government session, held on 19 February 2015, a Revised Action plan was adopted for Chapter 23 – Judiciary and fundamental rights, in which one of the planned activities is the preparation and adoption of AP for the fight against corruption for every local self-government unit, based on Model of AP for the fight against corruption in local self-government (2013-2014). However, it is unclear whether it relates to previous period or municipalities committed themselves to do so in 2015 based on the same model, because the deadline set is imprecise, that is, «december 2014 and continued», was stated, which further perplexes. Municipalities, that have not adopted action plans for previous period, cannot realise their activities retroactively, and instead need to adopt new action plans, along with obvious need for the adoption of new strategy of fight against corruption on local level.