Centre for Civic Education (CCE) presented the public opinion research regarding the perception of citizens on corruption in education. Daliborka Uljarević, CCE Executive Director, and Snežana Kaluđerović, coordinator of Active citizenship programme, spoke on the results of research.

“Perception of corruption in the system of education in Montenegro is not universal, but what is of concern is the increase of those who believe that corruption is widespread in this area in various forms and fields, as well as that other analysed parameters indicate its continued increase”, told Uljarević. 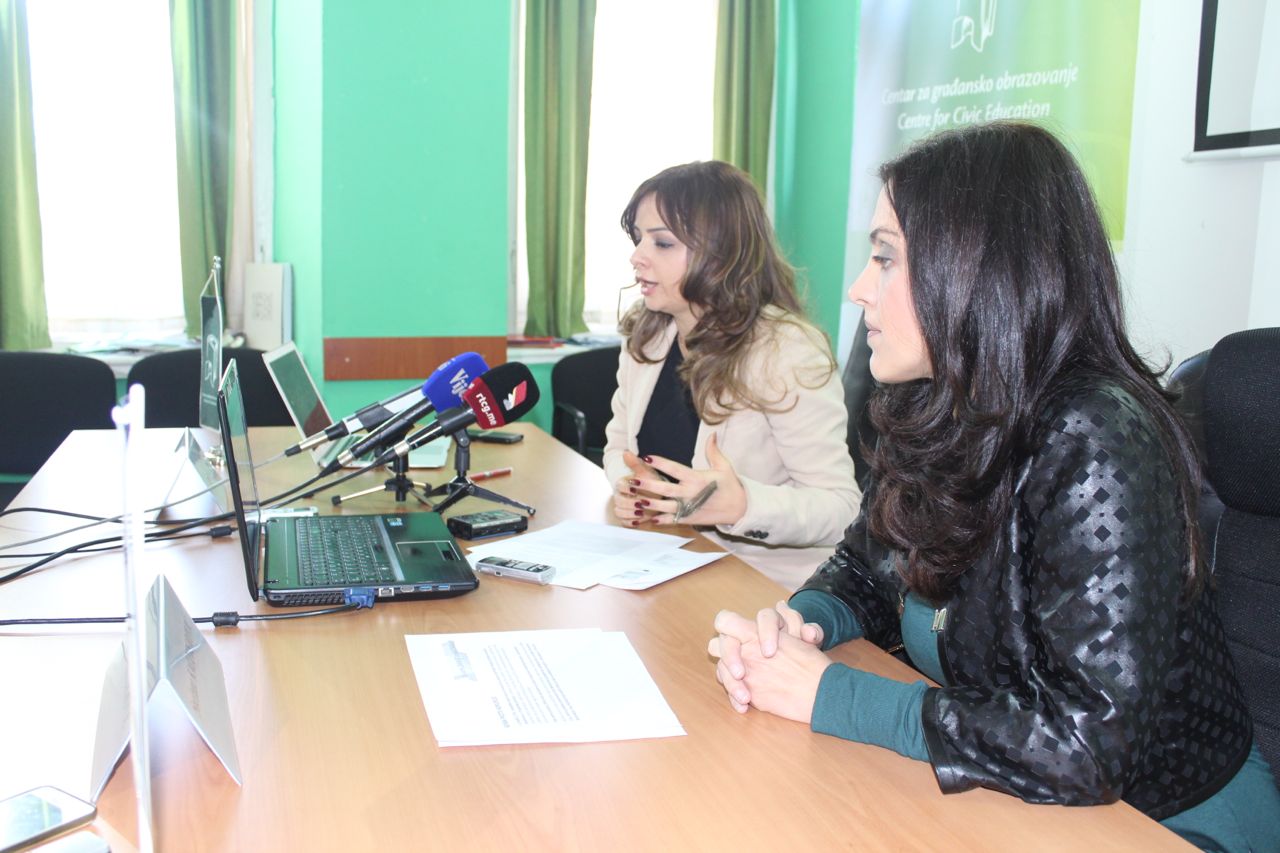 Uljarević pointed out that “52% of citizens claim that corruption is present or present to a great extent on private universities and colleges, while that percentage at state universities and schools amounts to 47%, and it is significantly lower when it comes to high schools (25%) and elementary schools (14%)”. She particularly emphasised the “dramatic increase of perception of corruption at state universities by 18%”, compared to the research from 2011, when CCE and CEMI conducted a similar research, whereby this percentage was 29%, and four years later it increased to 47%, which certainly should concern the management of University of Montenegro”.

Furthermore, she clarified that “the area which is perceived as most corrupt is the employment or academic appointment where 53% of the citizens believe that corruption is present to some extent. Slightly less than half of the citizens believes that corruption is present when grading students (48%) or when enrolling on colleges (48%), as well as when allocating places in student dorms (38%). Enrollment in high schools (26%) and elementary schools (13%) are perceived as areas with less corruption”.

Findings of research show that nepotism and use of party connections are present in Montenegrin system of education (according to 61% of citizens), and bribery and gifts (42%) also present a grave problem. “Only 15% of citizens of Montenegro claim that they personally used kinship, party or some other connections in order to obtain a better grade, or that they did it in favour of some other close person, or to pass an exam, while the percentage of those who are prepared to bribe someone is somewhat higher (18%). It is rather concerning the great decrease in the percentage of those who would be prepared to report that they were asked for bribe through the education system, or from 61% of citizens in 2011, to 40% of citizens in 2015, or two fifths, which certainly reflects the lack of tangible results of competent institutions when it comes to fight against the corruption in education” stated Uljarević.

“The issue of double labour contracts at the University of Montenegro, which was in the focus of CCE’s activities lately, is gaining on visibility and, so far, nearly a half of the citizens is familiar with this issue (44%), primarily those with higher level of education”, told Uljarević.

Montenegrin citizens have no doubts in terms of the privileged students in the system of education (81%), and those pupils/students are often identified as children of high officials, wealthy parents, and children of persons suitable for party’s interests, whereas children of teachers are least recognised as such.

“Half of the citizens in Montenegro still believe that it is possible to buy a valid diploma of a certain university or school in Montenegro. When it comes to personal experience, 19% claims that they know someone who bought a diploma, while this percentage is somewhat higher in the case of persons with higher level of education” concluded Uljarević.

When it comes to plagiarism, which has been on CCE’s agenda for quite some time now, one third of citizens (35%) claims that plagiarisms are recurrent in Montenegro, and the number of those who know someone who plagiarised their scientific, master or PhD thesis is considerably lower (14%), whereby this percentage is somewhat higher among citizens with higher level of education (27%), according to findings of research.

“CCE made a proposal for Operational Team for development of Action plan and implementation of measures from Action plan in line with the principles of Open Government Partnership to introduce the obligation of publishing master and PhD thesis of academic structure of employees from higher-education institutions, as well as public officials, on portals of higher-education institutions and at the wesite of Ministry of Education for public officials. Such proposal, as form of a solution for the problem of plagiarism in Montenegro, is supported by 59%, whether they think it would contribute in solving this problem to a greater or minor extent, while 25% believes that it would contribute to a small extent, and 16% cannot make an assessment”, concluded Uljarević. 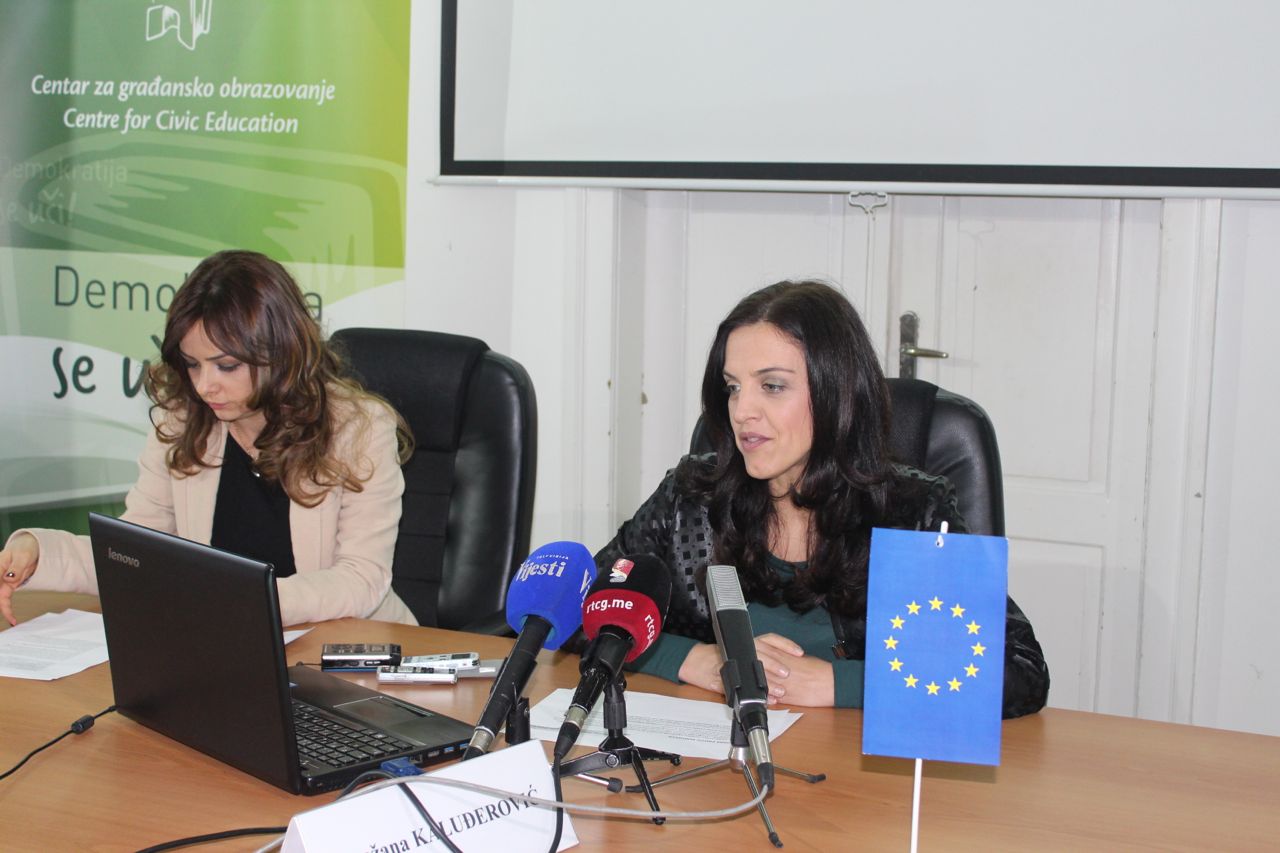 Research is a part of the project “Only education should get the title”, conducted by the CCE in cooperation with ELIAMEP, with the support of EU Delegation to Montenegro, whereas field and professional part was done by the agency Ipsos Strategic Marketing, from 9-18 December 2015, on the basis of three-stage random representative stratified sample of 1004 examinees from 17 Montenegrin cities.