On the occasion of 22 years since Operation Storm, which lasted from 4 to 7 August 1995, the Centre for Civic Education (CCE) appeals to the governments of the region to work more diligently to establish justice for victims of this, but also every other, armed action that took the innocent victims and produced destruction. It is disturbing that the West Balkan leaders are alienating themselves from obligation to deal with the past, which further aggravates the overall process of establishing justice for victims and the culture of remembrance. 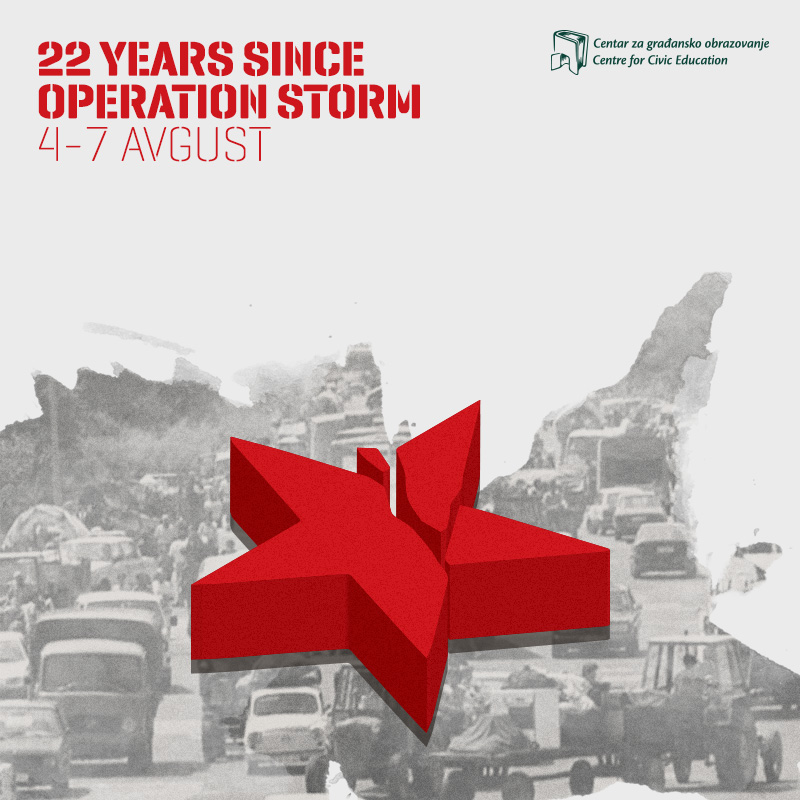 Twenty-two years ago, with the attack on Knin, in the dawn of 4 August, started an exodus of Serbs from Krajina, the biggest ethnic cleansing in Europe after the Second World War. In the action of the Croatian army and police named ‘Storm’, with a tacit consent of the international community, more than 250,000 people were expelled in just a few days, mostly to Bosnia and Herzegovina, Serbia and other countries of former Yugoslavia, and thousands of houses and other buildings were burned, while even today, a large number of refugees are waiting for their return to the areas from which they were expelled.

Of all verdicts for those accused of crimes in Croatia, the most controversial is undoubtedly this one for ‘Storm’. Generals Gotovina and Markač were firstly unanimously found guilty and were sentenced to 24 and 18 years of imprisonment respectively, but in the appeal proceeding they were both acquitted. In these judgments, the Trial Council and the Appeals Council – have on the basis of the same facts and the same law – come to diametrically opposing conclusions on key issues addressed at the trial by the prosecution and defense. These conclusions, however, do not question the established facts of what actually happened during and after the Operation ‘Storm’.

The CCE points out that the Croatian judicial system has a legal and civilizing obligation to seriously approach to reviewing this case, which would result in final convictions of those who are most responsible for terrible suffering of innocent people during this operation. Given that facts of the past war have not been fully and adequately established and therefore become fertile ground for manipulation and the acquisition of particular political points, it should be a specific obligation to create a list of names of victims of Operation ‘Storm’ and prosecution of war crimes that occurred during this operation, for which in this particular case are undoubtedly responsible institutions of the system in Croatia.

The CCE honors all victims of the military-police Operation ‘Storm’ and reminds of obligation of a culture of remembrance in order to remember the victims of the Storm, but also all the crimes that have taken place against innocent civilians in the territory of the former Yugoslavia in the period from 1991 to 2001. Effective processing of such cases requires also a regional response, on which civil society organizations in Montenegro and the region have been insisting for years, which have formed the broadest regional coalition that advocates for establishment of RECOM.