On the occasion of the 27 January – International Holocaust Remembrance Day –  Centre for Civic Education (CCE) reminds about the importance of remembering millions of the Holocaust victims during the World War II, and the obligation of everyone in society to work together to strengthen those ideas that are directed against the hatred that led to the Holocaust, all in order to prevent new sufferings.

CCE particularly points to the significance of educating on the facts about crimes and other atrocities of the fascist ideology, that left permanent scars on the entire humanity. The CCE presented findings of a research “How much do students nowadays in Montenegro know about anti-fascist resistance in XX century in Montenegro, region and Europe?” on the International Day Against Fascism and Antisemitism, 9 November 2017. Those findings indicate the necessity to work on the alteration of the history curriculum, but also on the improvement of history teaching, in order to enhance the current state and produce generations of youth who have knowledge of a significant historical period in which the anti-fascist movement was developed, the movement that set foundations for the modern democratic societies. 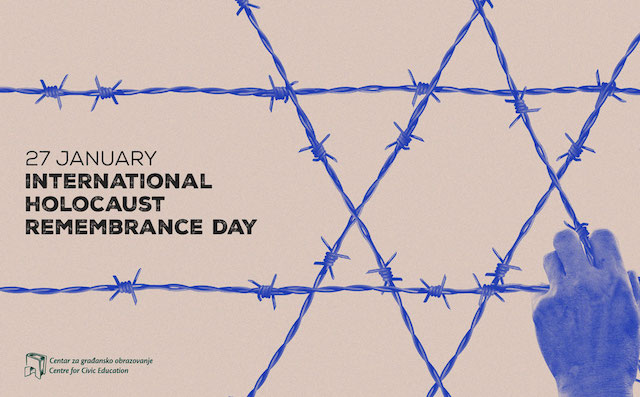 Students in Montenegro themselves, to a significant extent, recognize that formal education provides limited knowledge on these topics, and that professors do not stimulate them to independently learn about this field. Educational authorities and institutions must make efforts in order to create a model to motivate history educators and activists to produce and implement innovative teaching methods in classrooms, institutions, museums, through classes, workshops, discussions and study visits. Only such education on history represents the basis of the culture of remembrance that is characteristic for developed societies and is key for the prevention of misuse of the past.

Marking of this international day represents the opportunity to honor millions of innocent victims, the reminder that we must speak about holocaust, which can be achieved by constant emphasizing of the importance of remembering the survivors, victims, their families and those who contributed to the fight for equality, diversity and tolerance, solidarity and responsibility. Without the remembrance and respect towards victims, we cannot have sustainable peace and stability based on the values of open societies. CCE promotes forming of such value frameworks, by implementing peace and other educational programmes, that consider themes of transitional justice and confrontation of the past.

27 January is International Holocaust Remembrance Day as on that day 1945, concentration camp Auschwitz-Birkenau, the largest and infamous camp of the Nazi Germany, was liberated. More than 1,300,000 people from Europe, among which the majority were Jews, were deported to this camp, and 1,100,000 were killed. In 2005, UN General Assembly adopted official resolution to designate 27 January as International Holocaust Remembrance Day. The resolution appeals to all member states of the UN to respect the remembrance of the holocaust victims and encourages the development of educational programs on the history of Holocaust, which aims to show the determination to prevent genocide in the future.

Tamara Milaš, CCE Programme Associate and Spokesperson of the Coalition for RECOM in Montenegro