Strengthening civic culture, especially of young people, and their education on dangers and risks of populism, are crucially important to further democratic consolidation in Montenegro, which remains a challenge to all of us, as it was assessed today at the conference Democracy at the Turning Point – Influence of Populism on Youth which was organised by the Centre for Civil Education (CCE) in cooperation with the Friedrich Ebert Stiftung (FES). 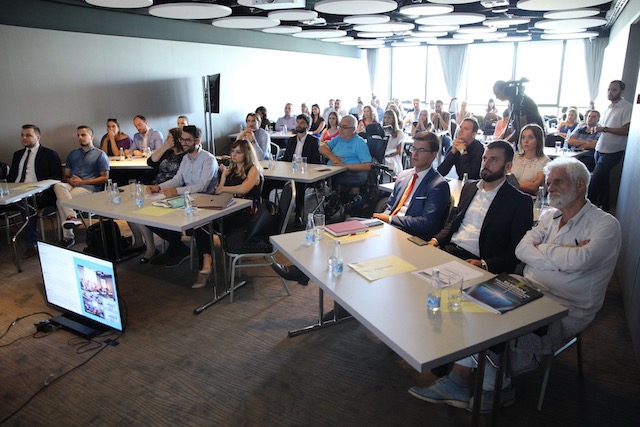 During opening of the event, Daliborka Uljarevic, CCE Executive Director, stated that ‘young people must be vigorously interested for the reality they live in, they must be main actors rather than support actors in their own environment, they have to give their best in order to build a different ambience in which a seductive populist rhetoric will be replaced by argument-based and dialogic approach, systemic solutions and compromise.’ Furthermore, she reflected on the long-lasting attempts to limit the work of critically oriented NGOs in Montenegro by the authorities, but also noted that ‘populism is not only immanent to authorities, it is also present in opposition, it is not even immanent to elderly, it is present with young people as well. And secondly, precisely in relation to NGO sector, we can measure the degree of spreading of populist virus in all structures in Montenegro and their related interest circles.’

‘Populism is not harmless, and therefore critical observation and questioning of reality is necessary. If such thinking is experienced without prejudice, it can be a driving force for establishing the missing culture of dialogue and overcoming the democratic deficit’, concluded Uljarevic.

The first panel considered whether growth of populism threatens democratic values, and in that context, Nikola Rakocevic, a member of the Main Board of Democratic Party of Socialists (DPS) and MP in the Parliament of Montenegro, said that ‘populism exists everywhere, we should not seek it solely in right or left political orientation. Populism, in its essence, has neither political nor ideological orientation; it is sound, opportunely tendentious, but ultimately it is not thorough.’

‘We note the growth of populism in Montenegro, but regardless of this, the political scene is still ruled by a party that is not draped with populism. Democratic Party of Socialists has been in power for 30 years and the DPS policy is not populist because if it was, it would not have lasted so long’, Rakocevic said. He concluded that ‘young people in Montenegro clearly notice what populism is, they increasingly manifest it by not trusting politicians in ‘general places’, because young people are looking for new jobs, a more stable European path of Montenegro, etc. It is therefore important to organise these conferences and discussions as they represent a powerful contribution to political activism, democratic strengthening of society and constructive dialogue of the political system.’ 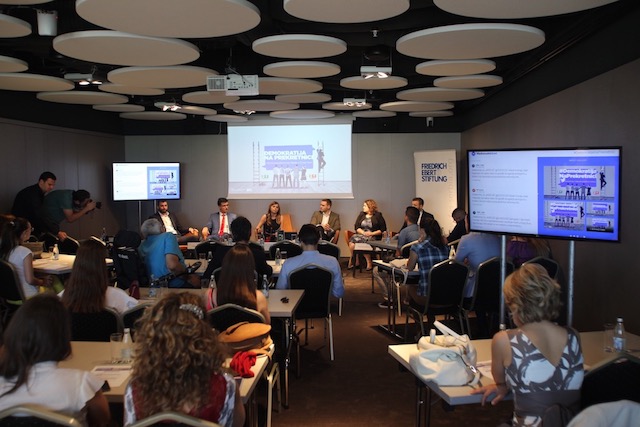 Member of the Presidency of Democratic Montenegro and MP in the Parliament of Montenegro, Danilo Saranovic, assessed that ‘populism in Montenegro is a substitute for the argumentative manner of political acting, and the worst kind of populism in Montenegro that is coming precisely from the government is creation of the structure of enemy of the state. This undermines democratic values of society since democracy and law are suspended, and an atmosphere is created where one political structure is allowed to do so in order to achieve the so-called higher goal.’ He also said that ‘populism in Montenegro found a fertile ground in socio-economic crisis, youth unemployment, but also isolation of young people who do not participate in the decision-making processes that relate to them. These young people are prevented from expressing critical awareness because critical consciousness is perceived as a deviation in society and this is discouraging.’

‘Young people do not recognize the strength in themselves to fight the problems in society and therefore they choose the option of leaving Montenegro. In order to prevent this, a long-term strategy must be created by relevant organisations, but also individuals, which should carry an emancipatory and anti-populist dimension’, highlighted Saranovic.

Marija Blagojević, a member of the Presidency of the Social Democrats of Montenegro (SD), adduced that political parties in Montenegro are precisely those actors that can influence populism and carry out that emancipatory role. ‘Also, it is also important that young people who are party members must be involved in decision-making processes in these structures, to create an opportunity for them to express their activist attitude, which will ultimately result in certain policies being adopted jointly.’ ‘When we talk about populism in Montenegro, we must step out of the party frame, because if populism threatens democratic values, it is alone and against democracy. It is used as a tool for pursuing politics that does not have to be negative by itself, but for today’s populism manifestation forms, there has never been a more suitable ground thanks to modern technologies that precisely have the most impact on young people.’

‘Montenegro is a young democracy and as such we cannot expect that Montenegrin society has a degree of political culture and institutional tradition which countries of democracy that exist a century or century and a half have, which does not mean that we need to strive for it’, Blagojevic emphasized.

‘Populism in Montenegro is a specific case, because the society in Montenegro is pre-political and has not established primary and fundamental prerequisite of democracy – i.e. the change of power in the elections. The current politics in Montenegro is just a cloak to cosmetically cover populism and all the negative things of the Montenegrin reality. Today’s power in Montenegro has also elements of fascism where you have a strong leader, fictitious opponents, and a dominant populism that serves to homogenise the electorate to protect the centre of power that has been intact for 30 years’, said Luka Rakcevic, a member of the Presidency of the United Reform Action (URA). ‘The fact that if we were not territorially where we are, if we were not so close to the EU, nothing would prevent the current government in Montenegro from leading the society with the process of Erdoganisation. In Montenegro, we are not able to imagine single political force that can deal with this today and that is our biggest problem, and as long as we do not change the political discourse and clearly define what populism is in Montenegro, but also what is the politics being led in the country, we cannot go any further’, Rakcevic highlighted. 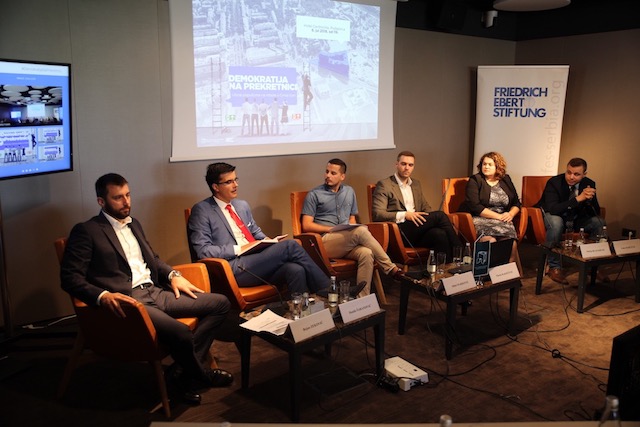 Member of the Presidency of Social Democratic Party (SDP), Bojan Zekovic, recalled the definition of professor Zarko Puhovski, PhD, who stated that ‘Populism is a kitsch version of democracy’. ‘When we talk about Montenegro, we need to consider how much are we, as a society, populists in our political behaviour. The characteristic of populism is that populism is anti-pluralistic. In addition, in Montenegro as much as we nurture the discursive practice of having authoritarian leaders standing on the side of the people or if they are rescuers of population on the side of the opposition, all of them at one time and most often during the elections represent populists because they want citizens to like them. On the other hand, influence of social networks on this phenomenon is not negligible, whereby politicians in Montenegro are more and more easily reaching citizens today and thus spreading the space for development of populism, which is unfortunately enormous’, he said.

During the next panel, the role of academic institutions in the education of young people and recognition of phenomenon of populism was discussed, that is, whether the growth of populism is a consequence of failure of education.

Professor Zoran Stojiljkovic, PhD, from the Faculty of Political Sciences of the University in Belgrade, underlined that the problem of populism is solved simply in a guerrilla manner through enormous participation, critical thinking with alternative models. ‘Populism is some kind of reaction to the twilight of democracy that is shattering before our eyes. The focus of power is not clearly marked, social inequality is growing and social cohesion is becoming smaller in society, and therefore we have an increasingly frequent phenomenon of populism. It is necessary to seek alternative answers in order to solve this problem, and education itself, as it is now, cannot deal with it.’ ‘In Montenegro and Serbia we have a democracy in which autocracy is deeply rooted. In this regard, there is a high degree of repulsion towards those who are engaged in politics, while on the other hand, the same people are precisely gladly joining political parties, because in that manner they can more easily reach certain positions’, Stojiljkovic stated. 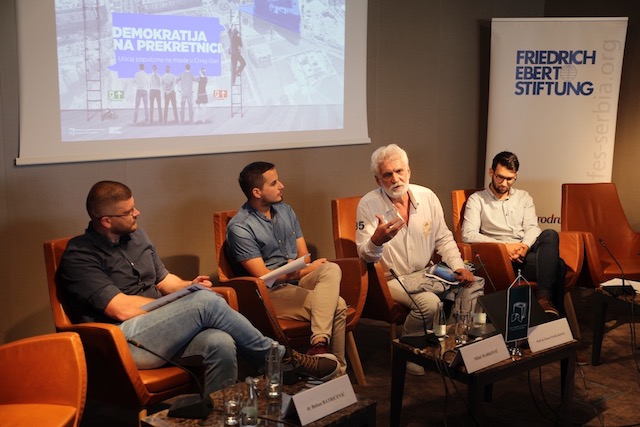 Boban Batricevic, from the Faculty of Montenegrin Language and Literature of University of Montenegro, said that populism begins at the moment when the mass begins to enter politics, and this instrument is precisely serving to exploit the same mass which results in political structures coming to power and holding on that power. ‘Populism is interesting precisely because it cannot be clearly defined. Education represents an important factor in the fight against populism, but in Montenegro the problem of education is the problem of method of transferring knowledge, and thus the very question is how to approach young people and explain to them what is actually populism, because they are precisely possible future populists. Additionally, the role of educational institutions was taken over by social networks that are littered with populism, and this is, in addition to media, a major social problem for young people in Montenegro. To solve this, the education system must be equally popular as social networks are, so it would interest young people and indicate them what is right’, Batricevic pointed out.

Rados Musovic, Coordinator of the Capacity Building Programme at the Centre for Development of Non-Governmental Organisations (CDNGO), has adduced that it is now a good moment to discuss this problem in Montenegro because we are witnessing an ever-expanding populist reporting of certain media that are asking for various traitors in society and mostly in civil structures that think critically. ‘Populism has become a buzzword in Montenegro today and is used lightly without thinking about what this phenomenon is. Populism is dangerous because people do not understand this term and it is becoming more and more frequent substitute for various kinds of isms, and it is precisely by this substitution that it becomes politically correct because isms such as fascism, racism, and so on are thus being concealed. The civil sector must not be a substitute for institutions but is an important segment of society because it has created an army of young people who are now creating a social reality. It also respects the great trust of citizens, and in this manner it is the opposite of politicians as the voice of people, and politicians do not like competition. The problem is that the civil sector was a substitute for the opposition at some point, and it is time to create forces that will think differently. Unfortunately, it seems that we are not yet sufficiently developed as a society for that’, concluded Musovic.