In order to strengthen society and render it more resistant to the evil of fascism, it is necessary to work on construction of capacities of civic and democratic society, through affirmation of principle of coexistence, tolerance, social responsibility, solidarity, as it was concluded today at the press-conference that the Centre for Civic Education (CCE) organised on the occasion of presenting the analysis Antifascism in Montenegro – between political trend and educational policy. 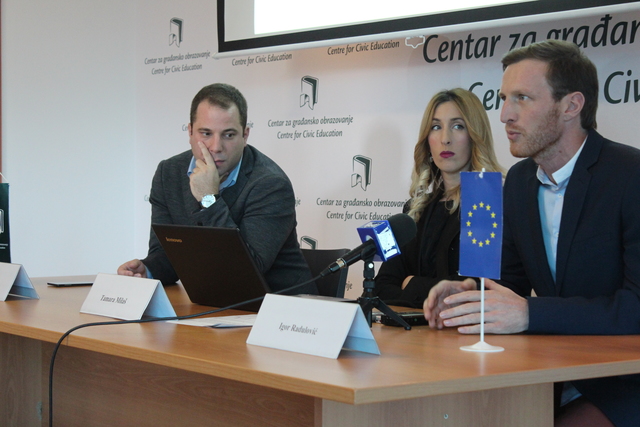 Conference has been symbolically organised on 29 November, i.e. day that once has been celebrated as state holiday of SFRY – The Republic Day.

Igor Radulovic, history professor in elementary and high school, pointed out that reduction of number of classes to only one class of history per week affects the lowering of level of pupils’ knowledge, and often the wrong understanding of the concept of antifascism. He drew attention also to textbooks, assessing that ‘one and same authors have been writing textbooks and professors themselves have no possibility of choosing textbooks they deem proper for teaching’. Radulovic recalled also the lack of knowledge of young people about national heroes, appealing to strengthening of national educational policy, because ‘history does not have a status it should have, and thus neither does the antifascism as a topic that needs to be addressed’.

Tamara Milas, Programme Associate in the CCE reminded of findings of CCE’s research that ‘surveyed students in general know the meaning of term of antifascism in significant extent, i.e. the 86,43% knew to define this term, but the level of knowledge is being reduced as the questions are being further specified.Thus, only quarter of respondents knew that antifascism has developed between two world wars, i.e. even three-quarters of them did not know when antifascism as a movement has developed, and there is few of them who today know who are national heroes or who recognise other symbols of antifascist fight.Less than a half of surveyed students can list at least three countries who belonged to the antifascist movement’. Milas indicated also that ‘more than three-quarters of surveyed students knows that uprising in Montenegro against fascist occupation occurred on 13 July 1941’. 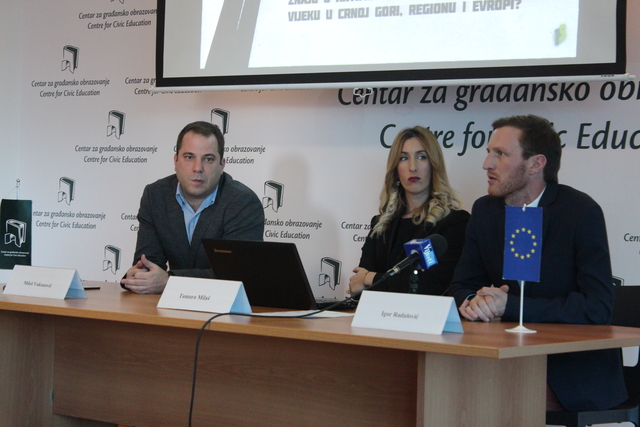 Milos Vukanovic, historian and Coordinator of European Association of History Educators EUROCLIO spoke about why antifascism should be taught. He warned that‘the policy of hate speech has survived and reminded that fascism is coming, precisely, in the moments of economic, military or political defeat, disguised in an idea of unity of people, and expressed with a strong word, strong and stable leader’.

He especially pointed out the importance of antifascist heritage that, as per his assessment, has been systematically neglected in Montenegro. ‘Cities in Montenegro have had concentration camps and battlefields and today in those cities, memorial plaques are standing, as well as streets and facilities carrying the names of national liberation heroes, while children simply pass them by, not knowing and not learning about them’, stated Vukanovic. He concluded that ‘jeopardizing the antifascist war heritage creates national problems, and thus it is necessary to refine both local and national systemic approach to antifascism’.