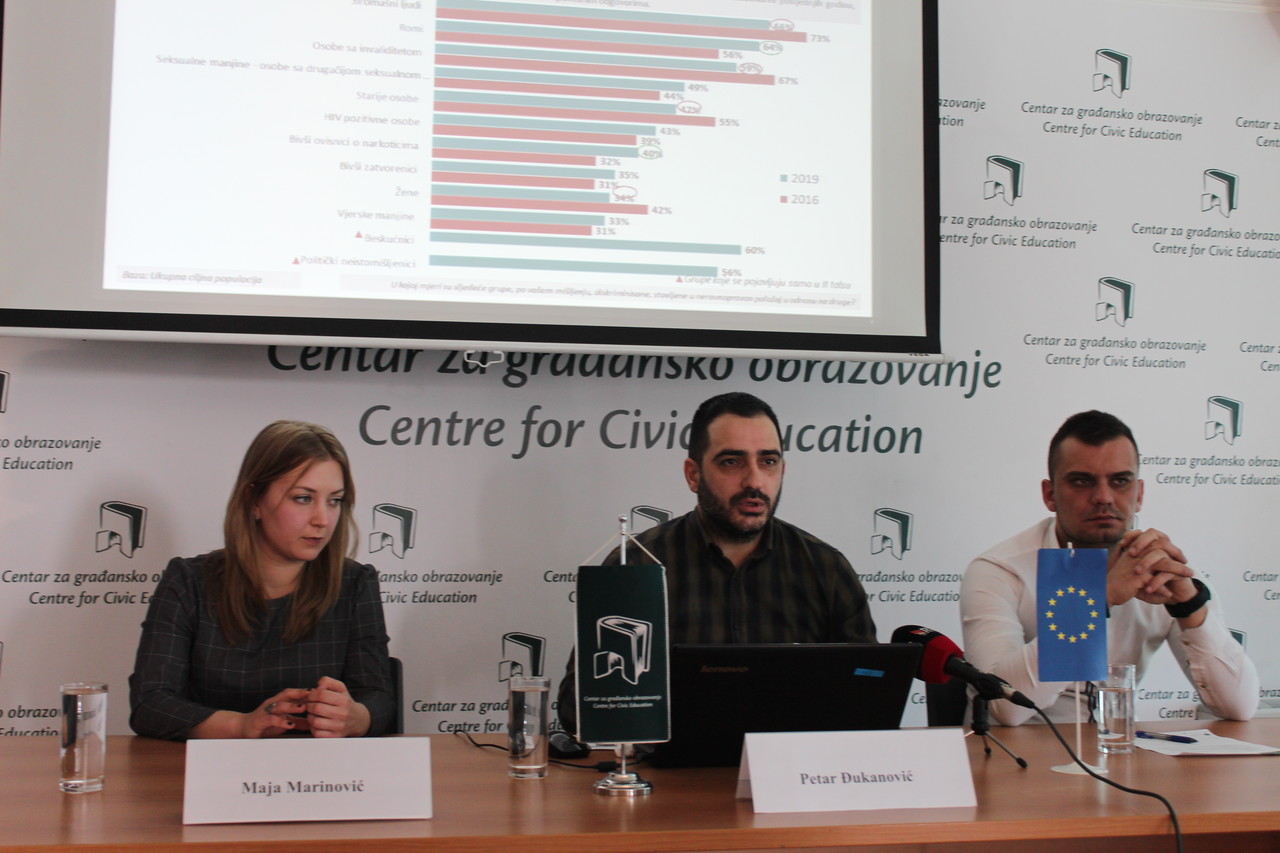 Djukanovic stated that ‘three-quarters of citizens of Montenegro estimate that deprivation of some right on the basis of some personal characteristic is not justified, with no exceptions, while one-fifth finds justification for deprivation of some right to certain group or an individual. This data is concerning, because it points to the fact that certain number of citizens does not understand that discrimination in any of its form is always forbidden’.

‘Poverty is strongly holding on the list of features perceived as an obstacle to equal approach, thus poor people remain mostly discriminated group (66%),  as per perceptions of citizens, and amongst first five are also Roma (64%) and persons with disabilities (59%). However,compared to 2016, instead of LGBT and elderly, this list comprises homeless (60%) and political dissidents (56%). These two groups have not been previously stated as an option which the respondents have opted for. Escalation of socio-political context, as well as more frequent presence of homelessness in the last years, have motivated us to offer them also as an option. Political dissidents have also increased significantly amongst spontaneous responses’, explained Djukanovic.

‘More than half of citizens estimate that non-governmental organisations and media contribute to prevention and fight against discrimination to the great extent, while almost two-thirds believe that political parties contribute to fight against this social problem to smaller extent or not at all. Also, citizens do not recognize sufficient engagement of unions and academic community in prevention and fight against discrimination, while the attitude towards contribution of religious communities is divided’, stated Djukanovic. 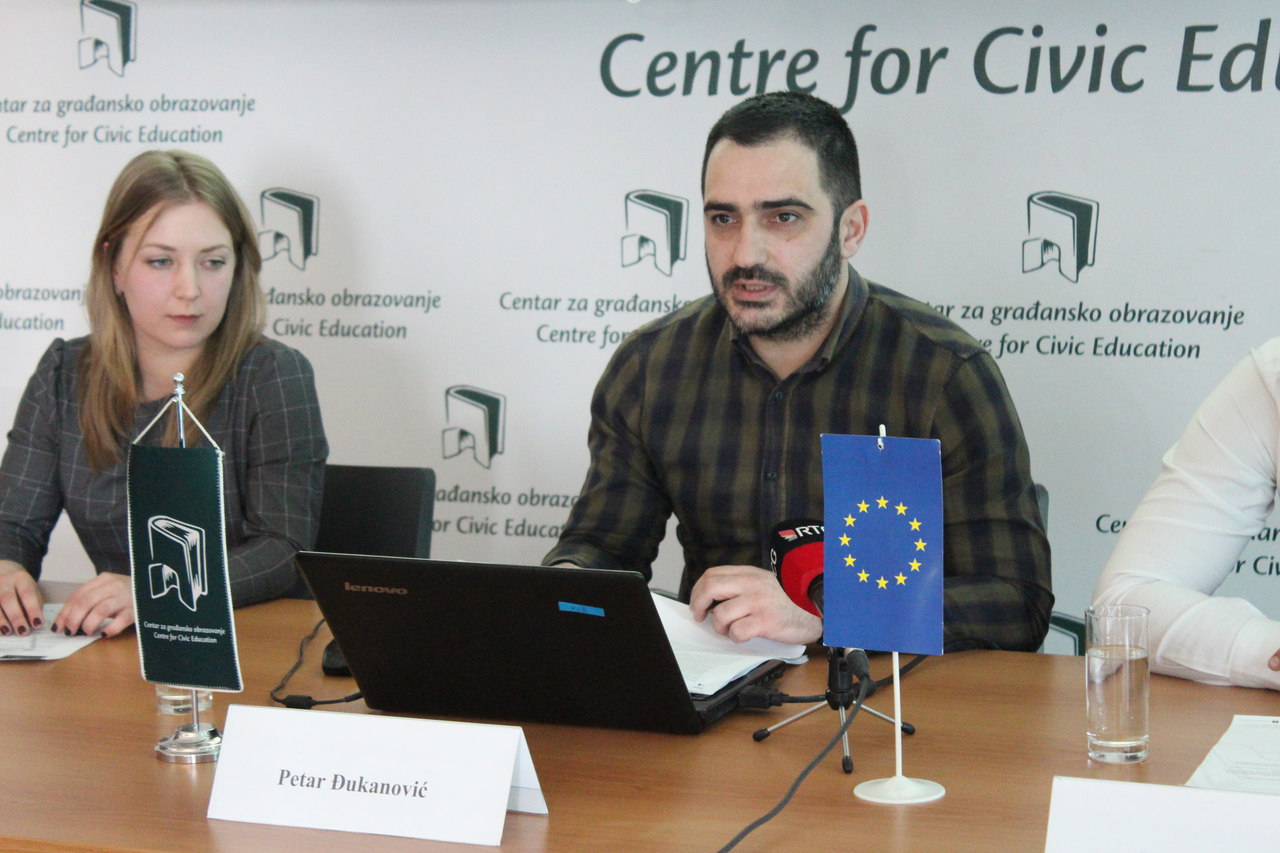 The largest percentage of citizens expresses disagreement with claims related to prohibition of inclusion of children with disability, or that women are victims of violence by their own fault, or that Montenegro should be a country of only Montenegrin people. Indicators of discrimination are highly expressed towards LGBT persons, followed by HIV/AIDS infected, as well as Roma, and also towards those who do not belong to traditional religions.

When it comes to broader state of mind, Djukanovic assessed that in relation to 2016 ’there are no significant changes in registering a somewhat positive attitude towards marriages amongst members of different nationalities. However, the number of those who deem that EU accession will not jeopardize our culture and traditional values is increasing (51% compared to 41% in 2016), while idolatry is also decreasing in certain percentage – nowadays 71% of citizens think that a strong and firm leader whom people will follow should be heading the country, while 80% have had this attitude in 2016. This is large percentage, albeit also dropping down, as well as in case of those who estimate that the most important role of a woman in society is to be good wife and mother (68% while it was 71% in 2016). Over one-third of citizens has conformist approach and state that they always act in a manner expected from them by their environment’.

Liridon Vulaj, programme assistant in the CCE, explained that the field research was conducted from 10 to 18 February 2019, including 1036 respondents, with application of the three-stage random representative sample, within the adult population from 17 Montenegrin cities.

Public opinion research about discrimination is part of the project 360° Full Circle for Human Rights which seeks to contribute to reduction of discrimination and promotion of tolerance and respect of human rights in Montenegro. Project is supported by the EU Delegation to Montenegro, and it is implemented by the CCE in partnership with NGO ATAK from Podgorica, BELDOCS from Belgrade and Human Rights House from Zagreb, in cooperation with Ministry of Education, Institution of Protector of Human Rights and Freedoms of Montenegro and NGO Juventas. The expert part of research was performed by agency Ipsos Strategic Marketing.