Public opinion when it comes to trust in the current judiciary system of Montenegro is divided, but slightly higher number of respondents states that has no trust in the judiciary, as indicated by data from the public opinion survey on transparency of judicary in Montenegro which the Centre for Civic Education (CCE) presented today.

’Those who express distrust, we asked to state three key reasons for that, and within the answers we dominantly got – presence of corruption, influence of politics or politicians on the work of the judiciary and lack of justice. Amongst overall reasons, the order of the first three remains unchanged, additionally procedure lenghth is high ranking, as well as poor human resources policy, selective initiating of cases by the Prosecutor’s office, conflict of interes, subjectivity of judges and the disparities of judicial practice, ’ explained Mira Popovic, CCE Programme Associate. 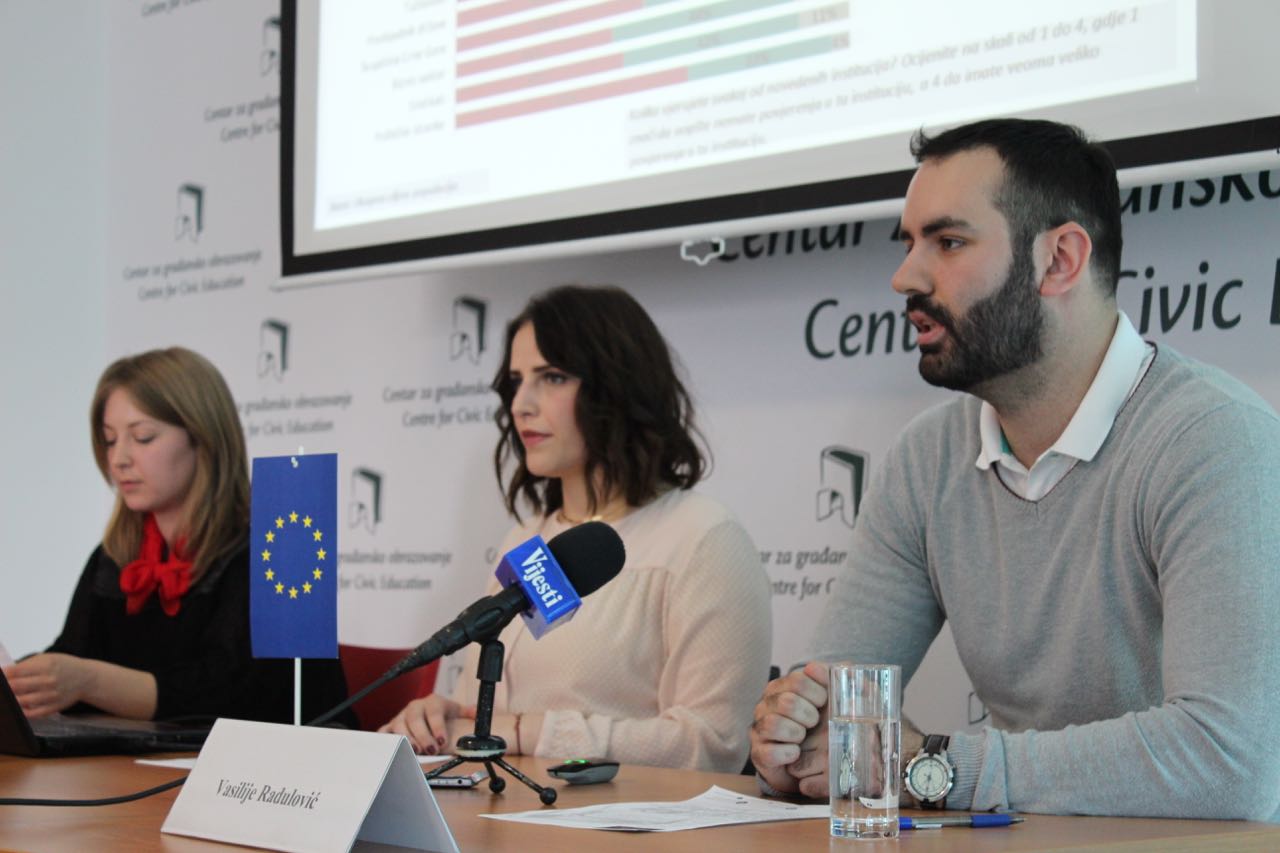 ’In general, trust in the institutions we have measured again is in line with our previous research, with oscillations within statistical error. Hence, citizens of Montenegro have the highest level of trust in educational institutions and health care, than in police, media, banks and non-governmental organizations, and lower ranked are Government, judiciary, president of the state, prosecution … They have the least trust in political parties and the Parliament, which points to the ongoing crisis of the existing representative democracy,’ stated  Vasilije Radulovic, CCE Programme assistant.

Citizens have significantly more trust in the judiciary than the prosecution, with the note that almost half of the citizens do not trust any judicial institution at all.

’When assessing individual segments of court work, it is striking that integrity and independence are the worst assessed even by 51% of respondents. This is followed by  accessibility to citizens which is negatively assessed by 49% of respondents, efficiency with 48% negative grades, and justice and quality of work have 46% negative grades. It is concerning that negative grades in each category dominate in relation to positive ones, and that this is especially visible in the part of the assessment of integrity,’ said Popovic.

And when evaluating the work of the prosecution, citizens as the most negative aspect see integrity and independence, with 51% negative grades. Similar scale is in other categories, with 48% of negative grades for justice and accessibility and 46% negative grades for efficiency and quality of work. As in the case of courts, prevailing negative over positive grades are in all aspects of work. This is further reflected on the average grades that are below 2.5.

‘When asked how they evaluate openness of the various components of the judicary system, citizens best position the Notary Chamber, followed by the Bar Association, courts, prosecution, while the Association of Court Experts and the Enforcement Chamber are at the forefront. However, in total grades, when summarizing positive and negative, this means that the Notary Chamber has an average grade of 2.6, the Bar Association and the Association of Court Experts accordingly 2.5, and courts, the Enforcement Chamber and the prosecution 2.4,‘ Mira Popovic elaborated.

Most citizens think that irregular actions are present within the Montenegrin judiciary. Thus corruption, impact of politics on the judicary and the prosecutor’s office and the long duration of the proceedings emphasize two-thirds of respondents, and just a little less than that mention poor human resource and inadequate penal policy, as well as conflict of interest.

Popovic further stated that, given the relative lack of personal experience with courts, citizens are fairly well informed about the new legal institutes. ‘Half of them know what the plea agreement implies, 43% are familiar with out-of-court settlement, 30% state the same for alternative dispute resolution, and one-quarter considere themselves informed about mediation. From database of citizens who had experience with courts, and I emphasize that it is not a large group, 15% received court’s recommendation to resolve the dispute through mediation, and amongst those who have chosen mediation, more than four-fifths (85%) assessed that mediator gave them clear information,’ said Popovic. 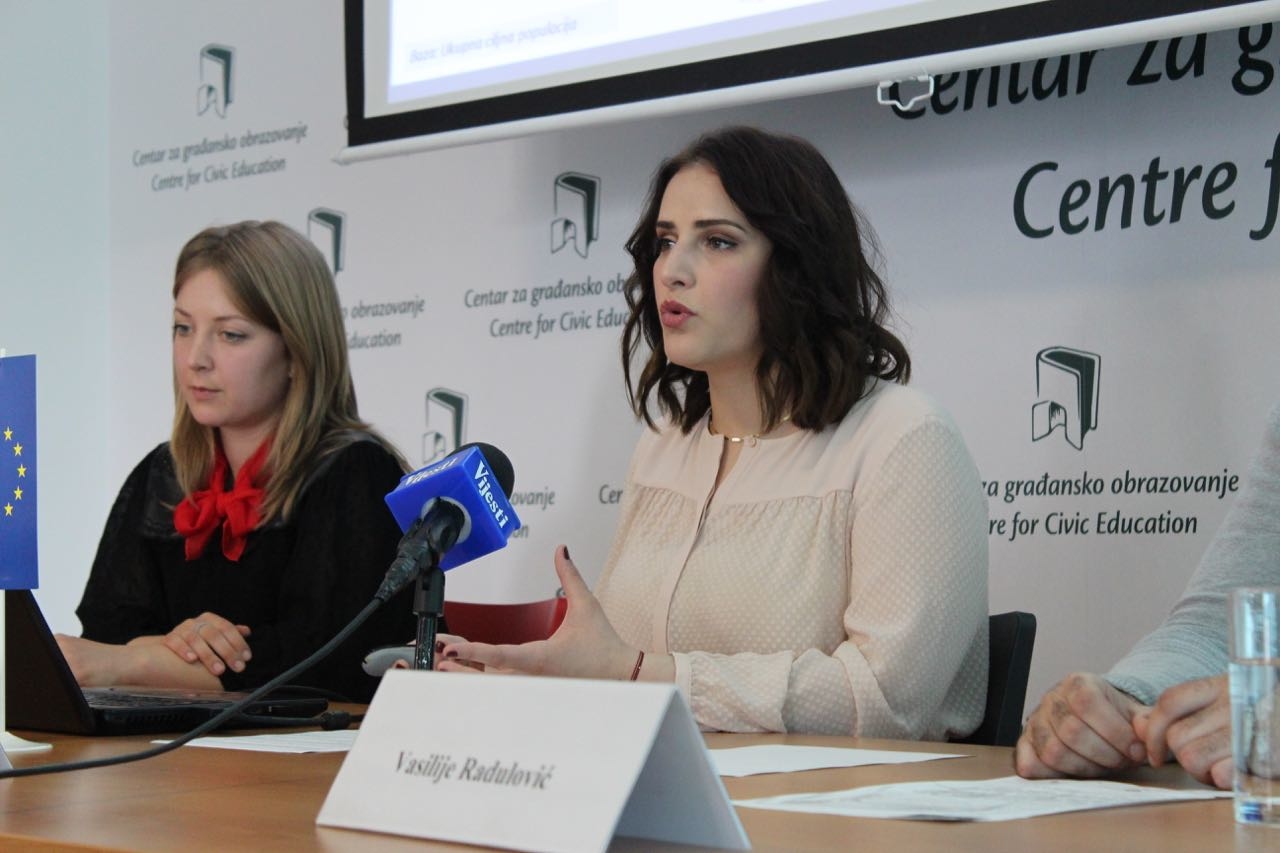 ’In the area of information flow about the work of judiciary, we tried to find out how citizens are being informed. Thus, out of those citizens who have need for information related to the work of judicial authorities, majority are trying to inform through website, every tenth through free access to information requests, and much rarer this happens through addressing the authorised persons in the judiciary. Almost one-quarter of the respondents visited website of court or prosecution (23%), but most of them noted that they did not find everything they needed at that time. Approximately every sixth respondent (16%) used one of the brochures of courts or prosecutor’s office, and those who are not satisfied with the information contained in these brochures are prevalent,’ claimed Popovic.

Citizens are divided when it comes to the role of media in raising level of transparency of work of judiciary, although most of them evaluate the work of media as positive.

In reference to communication of judiciary with the public, Popovic emphasized that ’press releases of the courts and the prosecutor’s office are difficult to understand by those who are not lawyers or completely vague to the dominant majority of citizens. This should force the judicial authorities to do more in change of the approach to drafting of these statements in order to improve their own communication with the public.’

She explained that with this research they wanted to fin out whether citizens consider sufficiently frequency of appearance of the representatives of the judiciary, and that findings essentially recommend that they should be more frequent, because even 80% of those who think that judges and prosecutors have to talk far more to the public, to explain their decisions and to give expert opinions.

’In the part of visibility of the representatives of the judiciary, it is indicative that only one – fifth state that thay know judge or prosecutor who has public appearances (18%), and half of that number recognize Milivoje Katnic (47%), than Vesna Medenica (39%), followed by significantly lower recognition of Ivica Stanković (20). The only one who is not among the heads of the judiciary, but one that public recognizes is judge Suzana Mugosa, probably because of case publicly  known as ’coup d’etat case’, said Popovic.

Most of the respondents had positive experience when it comes to the judge’s behavior towards them in the process that is being conducted, assessing that acting judge is kind and objective.

Almost two-thirds of the citizens think that in practice judges and prosecutors are not subject to sanctions for acting beyond the code of ethics.

’Finally, as many as three-fifths of citizens consider that the judiciary is not independent of the executive power. Therefore, it is not surprising that respondents see the Government of Montenegro as the most responsible for raising the level of transparency of the judiciary in Montenegro, and significantly smaller number judiciary, Parliament, prosecutor’s office, media, etc.’, concluded Popovic.

Field research was conducted from 9 to 14 April 2019, including 1030 respondents. Three-stage random representative sample was applied within the adult population of 17 Montenegrin cities, and taking into account indicators of gender, age and regional representation.

The research is part of Open justice! project, supported by the Ministry of Justice of the Government of Montenegro. This project aims to contribute to increase of public trust in judicial institutions in Montenegro and to improve cooperation between judicial institutions and media. In addition, the project aims to increase transparency of the work of judiciary, as well as respect of the provisions of the code of ethics by judicial officials. The expert part of research was performed by the agency Ipsos Strategic Marketing.