In May this year marks 27 years since ‘Deportation of Refugees’, when a war crime against refugees from Bosnia and Herzegovina was committed in Montenegro.

Tomorrow, on 25 May 2019, at noon, in front of Police Station in Herceg Novi, wherefrom the majority of victims were deported to their deaths, in an organized manner, on 25 and 27 May 1992, Human Rights Actions (HRA), Centre for Civic Education (CCE) and Centre for Women’s and Peace Education ANIMA organize a memorial gathering. This is the tenth anniversary that we commemorate in that place. As in all previous years, we leave flowers and pay tribute to the victims. 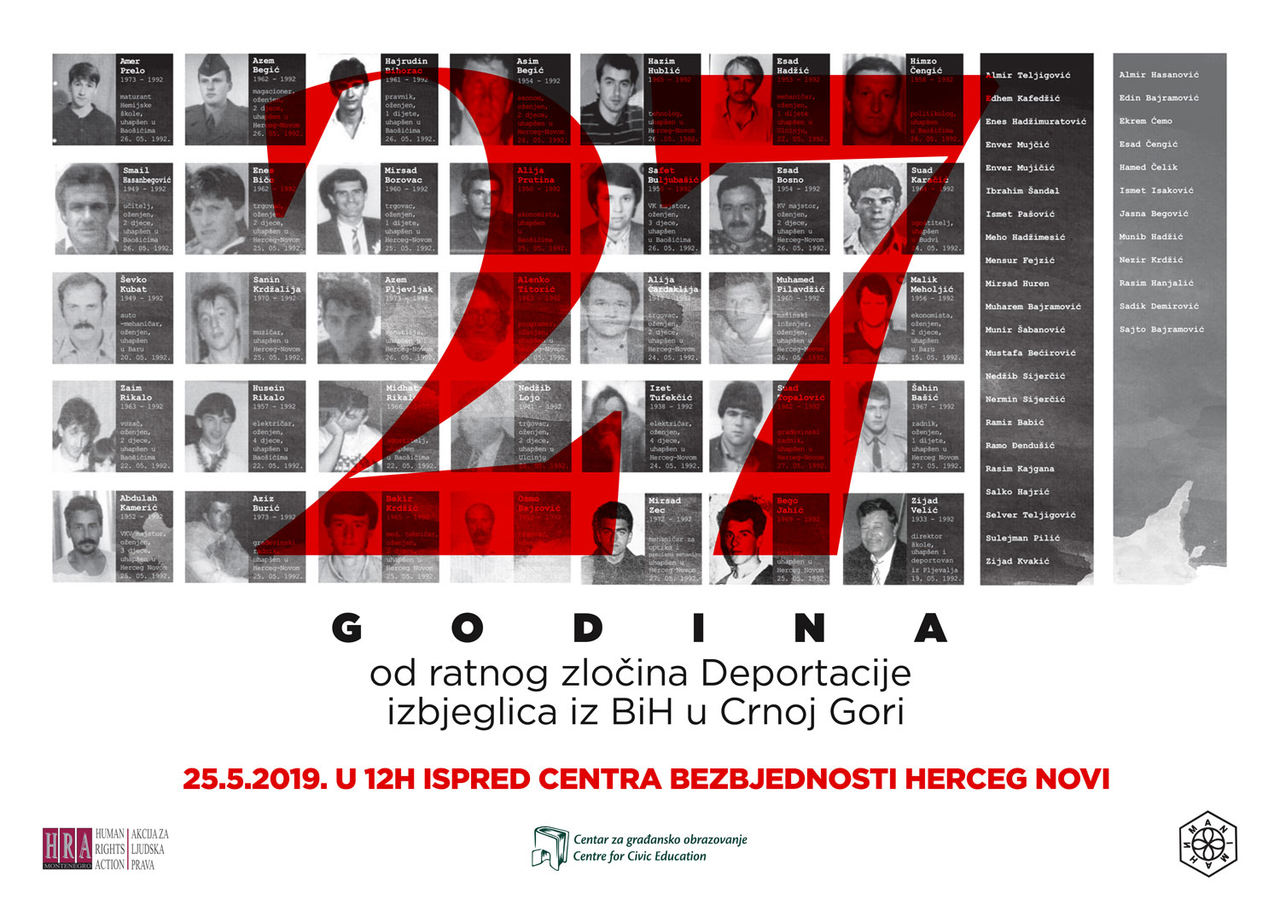 We invite you to join us in marking this sad remembrance. Come to remind ourselves together of the victims and their families who sought refuge from war in Montenegro, and experienced the most horrible betrayal. Come to show that we condemn this crime, that we expect the punishment of those responsible for crime, to stand up again for building the monument to the victims and proclaiming the remembrance day, and thus to try to ensure that the war crimes never again repeat.

Tomorrow, for the first time, one of the few survivors of the deportation on 25 May 1992, who managed to save himself from camp in Foča, will also be present. For the very first time, after this unfortunate event, he is coming to Herceg Novi to attend a memorial gathering.

We remind that Montenegrin police unlawfully arrested at least 66 civilians aged from 18 to 66 in May 1992, who had taken refuge in Montenegro from war that blazed in Bosnia and Herzegovina, and that it handed them over as hostages to the army of Bosnian Serbs under leadership of Radovan Karadzic and Ratko Mladic to serve for exchange of war prisoners. Written documents confirm this fact.

Victims of this crime are undisputed, Montenegro has paid compensation of damage to their families after four-year trial as per court settlement due to illegal actions of Montenegrin police that brought forth these tragic consequences. It was also determined by criminal conviction in Montenegro that they were unlawfully arrested and deported as hostages, as well as by conviction of The Hague Tribunal in case Krnojelac (commander of camp in Foča).

However, it is disputable that courts in Montenegro did not find strength in all of that to recognise the war crime and to punish it. By conviction of the Higher Court in Podgorica (final from 17 May 2013 when the Appellate Court of Montenegro confirmed it) nine of accused former officials of police, Ministry of Interior and Intelligence service were acquitted for war crime against civilian population since they allegedly did not have a status of ‘member of conflict party in B&H’, and not even of those ‘who were in the service of conflict party in B&H’, which according to wrong interpretation of Montenegrin courts was necessary to deem they committed a war crime. Afterwards, the expert of the European Union, Italian prosecutor and international judge Maurizio Salustro, highlighted in his report on prosecution of war crimes in Montenegro that such interpretation is wrong, unknown in international humanitarian law and practice. Group of mothers, daughters and sisters of victims has submitted an application to the European Court of Human Rights because Montenegro did not provide criminal justice in this case nor respected human right to life and prohibition of torture.

HRA, CCE and ANIMA and President of the Council for Civilian Control of Police Work, Aleksandar Sasa Zekovic, have submitted three initiatives eight years ago:

None of these initiatives has been accepted to this date.

On Monday, 27 May 2019, at 12h at EU Info Centre, in Podgorica, we organize panel discussion on the right to reparation for victims of crime, about which you will be specifically informed.