Transparency is one of the basis of democratic state that indicates the level of accountability of public sector bodies, including the judiciary, towards citizens. In the judiciary, the significance of this postulate is recognized, but further efforts are needed to effectually implement it, through two-way communication, planned information and education, which would strengthen trust in the judiciary and promote the rule of law, as it was concluded today at the Open Justice Conference that was organized by the Centre for Civic Education (CCE) in Podgorica. 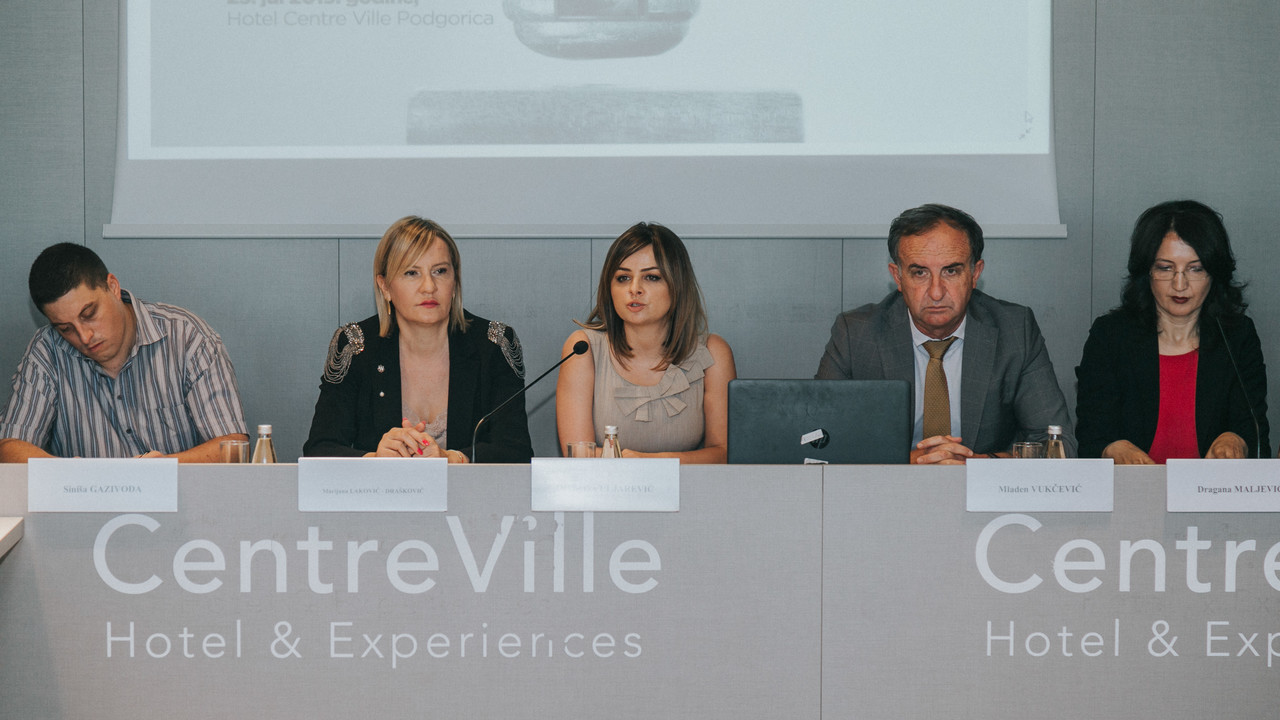 Daliborka Uljarević, CCE Executive Director, assessed that ‘as a third branch of the government, besides the legislative and executive branch, the judiciary has a huge burden of expectation in the ongoing process of negotiations with the European Union. This particularly refers to the commitments undertaken through Chapter 23, which together with the Chapter 24 represents the starting and ending point of the Montenegrin negotiations with the EU, as well as the overall reform processes in the country’. She pointed out that the Strategy for the Reform of the Judiciary 2014-2018, as well as the draft Strategy for the Reform of the Judiciary Draft 2019-2022, sets an improvement, i.e. an increase in transparency, as one of the strategic goals, and it also correlates with strengthening of citizens’ trust. ‘It is significant that the authorities recognized the need for more open communication with citizens, especially given the fact that in the public opinion survey, conducted by the CCE in April 2019, almost half of the citizens stated that they do not trust any judicial institution in Montenegro’, she said. Uljarević stressed that ‘the Prosecution and the Judiciary have reputable professionals whose work remains in the shadow of their colleagues who do not do their job conscientiously, causing damage to the public interest and thus attracting more public attention’, she concluded.

Prof. Dr Mladen Vukčević, President of the Judicial Council, reminded that ‘the transparency principle is one of the basic principles of judicial power, it is an integral part of its independence. It is a measure by which society values ​​the performance of the court’. Speaking about the transparency of the judiciary, he pointed out that all aspects must be taken into account. ‘It’s not a simple task ahead of us, because we need to strike a balance between the public’s right to know, the right to privacy and the right to a fair trial. Therefore, the judicial system should take measures and ensure that the public understands the central importance of the transparency and justice for democracy and for the prosperity of the state. This cannot be done without the media, and we are therefore ‘condemned to cooperation’ with each other’, Vukčević said. He particularly referred to several characteristics of the relationship between the court and the media, such as normative links to existing strategies, mechanisms and guidelines in this area, then respecting international standards and constant dialogue on the issue, as well as problems related to the perceptions of the work of the courts. ‘I think that our enemies of truth are not only lies, but convictions as well, since even after the epilogue of some trials, the same number trust or does not trust the judiciary. Sometimes attention is paid more to what is incidental and interesting, than to what is important. The responsibility for this is divided, on some to tell what is important, and on others to publish it’, Vukčević concluded.

The Director-General of the Directorate for the organization of the Judiciary, Criminal Law and Supervision at the Ministry of Justice of Montenegro and the negotiator for chapters 23 and 24, Marijana Laković Drašković, stated that ‘the Montenegrin judiciary is aware that ‘it is not enough that justice is satisfied, but it has to be visible to everyone’, and therefore, in the previous period, special attention was paid to improvement of the transparency of the work of the Judiciary and the State Prosecution’. She also assessed that ‘the Montenegrin judiciary in recent years has made great progress in the transparency and openness of the work of the courts, state prosecutors’ offices, as well as the activities of the Judicial and Prosecutorial Council’. Stating that ‘trust in the judiciary cannot be viewed separately from its effectiveness, accessibility and integrity’, she announced that ‘progress in these areas will be one of the strategic goals of the new Strategy for the Reform of the Judiciary 2019-2022 and the accompanying Action Plan, which are in the final stage of development and whose adoption is expected by the end of the third quarter of this year’. She also announced that, along with strengthening trust in the judiciary, they will also work on familiarizing citizens with the functioning of judiciary and judiciary-related professions. 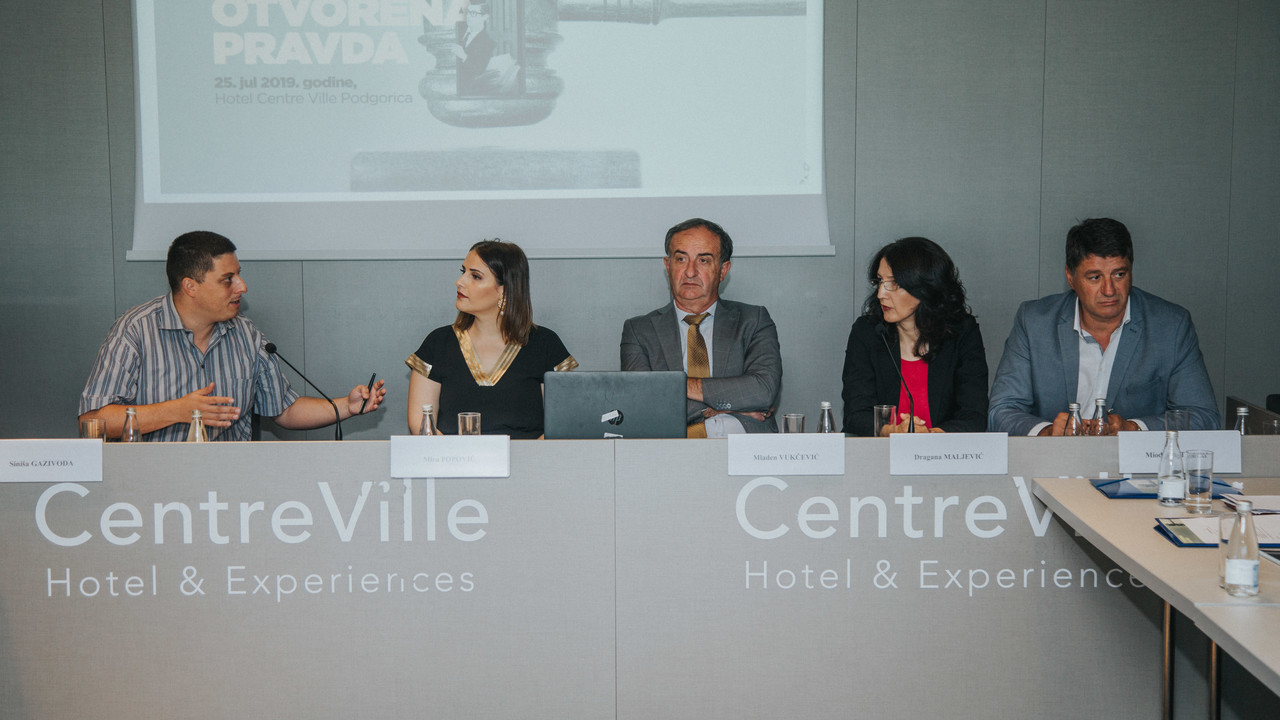 Dragana Maljević, public relations adviser at the Supreme State Prosecutor’s Office, in reflection to the CCE’s research on transparency of the judiciary stated that this research was valuable material that the Prosecution and that it was used in process of drafting a new communication approach. ‘With the new communication strategy, which will refer to the next three years, specific activities are planned that should influence our citizens to understand us better, understand the competencies, actions but also to explain the terminology that is often incomprehensible to the general public’, Maljević said. She also noted that the final version of the updated website pravosudje.me, a unique portal for the Ministry of Justice, the Prosecutor’s Office, the judiciary and the Directorate for the Execution of Criminal Sanctions is under way. She concluded that the results of the research conducted through the ‘Open Justice’ Project warn that ‘the changes that have occurred in the prosecution, in terms of transparency, are insufficient and that it must continue with more intensive work. We are ready for this kind of work and that is why I hope that new research will present better results in the next year for the State Prosecution’.

Lawyer Siniša Gazivoda explained that ‘the publication of judgments, as well as the trial schedules, have greatly contributed to improvement of transparency of the judiciary in recent years. This makes it easier for the media to report on cases of public interest. I also hope that the courts’ communication protocol will be applicable as soon as possible and give positive results when it comes to relation between the courts and the media, which is a prerequisite for strengthening public trust in the judiciary’. He assessed that ‘it is necessary for the holders of judicial functions to enter the public life, not only by participating in panel discussions and similar formats, but also with the presence in the media by presenting attitudes and opinions on current social issues. This is the most effective way for the public to see that there is a diversity of opinions within judiciary, as well as that they are professionals willing to contribute in different ways to the welfare of the society, which would have direct effects on strengthening reputation and authority of the judiciary’. Answering the question about commenting court decisions, Gazivoda was clear that the public has the right to comment on court proceedings even while they are in progress, stating that such a principle was developed in the early practice of the European Court of Human Rights. Nevertheless, he warned that ‘when commenting on current court proceedings, the public must be limited to commenting on facts and, evetually, giving personal opinion on legal issues, while refraining from commenting on the personality of judges and giving personal qualifications’. 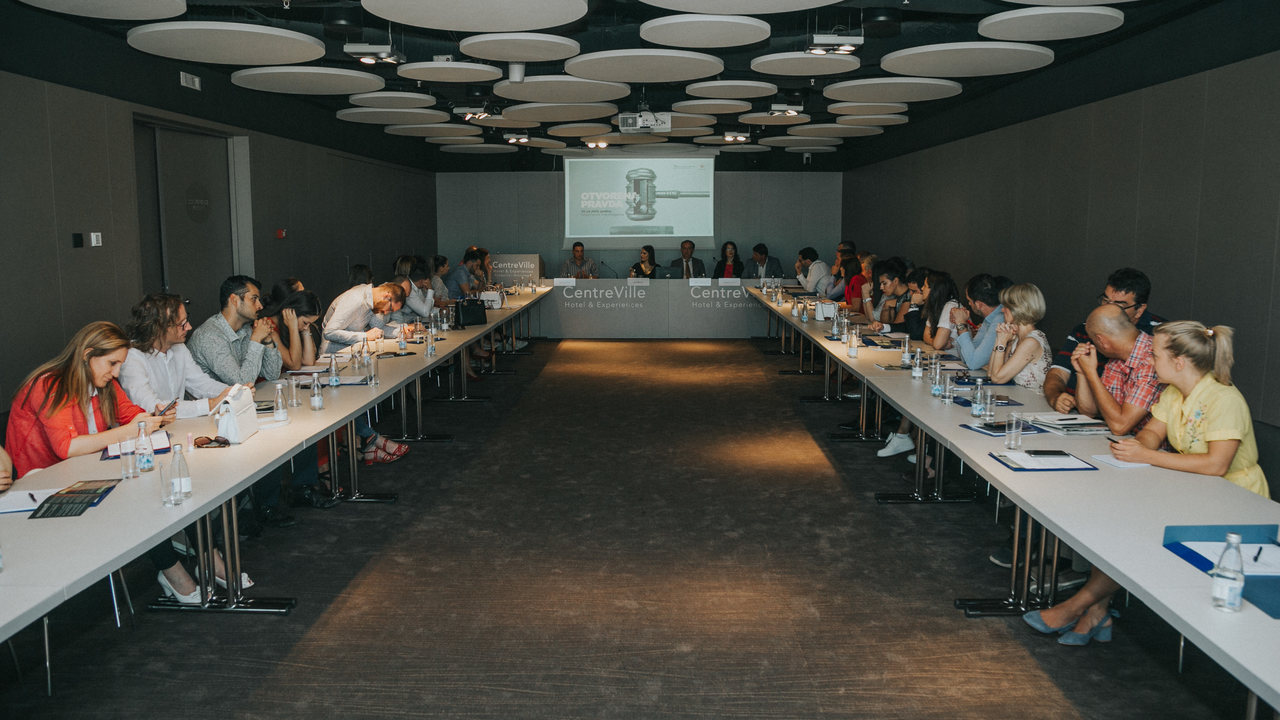 Miodrag Strugar, strategic communications expert, recalled that ‘journalists are not paid to ask affectionate questions and have the right and obligation to question and raise ‘unkind’ questions, and that the job of institutions is to inform them of what the public has the right to know in the manner that the public understands it, that the language of communication is adequate and appealing to the public addressed’. He referred to the Communication Strategy for the Prosecution from 2015, which highlights three aspects of communication: information, education, which includes the education of the media community and all stakeholders, as well as the promotion of the rule of law. Strugar said that the holders of judicial functions are not active in informing the public regardless of what their current job or subject is, that they don’t participate sufficiently in expert discussions, guest lectures at law faculties, public discussions that represent communication tools that would help them to increase public trust in institutions, assessing that everyone is worth as much as the public thinks s/he works well. ‘In a friendly environment that understands what the Prosecution and the Judiciary are doing, it would certainly be easier for prosecutors and judges to do their job. The public is not only interested in the facts, the number of cases, the number of people arrested … The public wants a sense of justice, a sense of effort, a will and an unbiased attitude towards everyone’, Strugar noted.

The conference ‘Open Justice’ gathered about 50 representatives from the judiciary, non-governmental organizations, political parties, the Government, media and academic community. The conference is the final activity of the project of the same name, whose overall goal is to contribute to increase of public trust in judicial institutions in Montenegro and to improve cooperation between judicial institutions and the media. More specifically, the project focused on increasing the transparency of the work of the judiciary, as well as respect for the provisions of the code of ethics by the judicial and prosecutorial authorities. The project was supported by the Ministry of Justice of the Government of Montenegro.