The Centre for Civic Education (CCE) welcomes the so far efforts of the Government of Montenegro to combat the coronavirus. However, we feel obliged to point out that the last announced measure of publishing the names of persons in self-isolation leads directly to violation of human rights and fundamental democratic principles guaranteed by the Constitution and international standards. Hence, we urge the Government to immediately withdraw such a decision and to provide control of persons in self-isolation by the competent authorities. 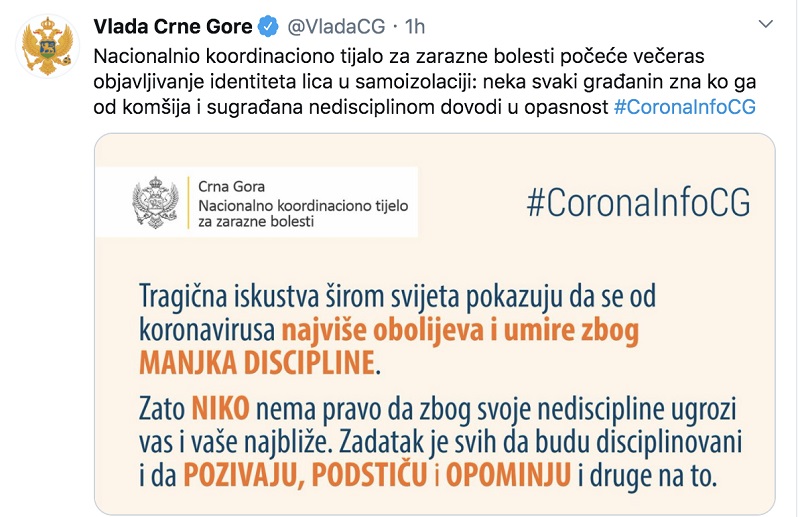 The Constitution of Montenegro, in Article 40, guarantees the right to respect for private and family life. In addition, Article 8 of the Convention for the Protection of Human Rights and Fundamental Freedoms (ECHR) protects the right to privacy of the individual which may be restricted for the protection of health. But the Government’s announcement indicates that there is some other background, which can lead to immense consequences and further complicate already difficult state of affairs.

We remind that at lightning speed, after publication that the first cases of the coronary virus were recorded, many citizens knew who they are and that, as a result, these families felt terrible stigmatization. Tonight, immediately after the publication of this Government decision, numerous citizens raised polemics on social media and started revealing the identities of those who are in self-isolation and who were ordered by Health and Sanitary Inspection to remain in self-isolation since the entering Montenegro.

This raises questions: whether at these moments of extreme concern, citizens can really act in an appropriate manner and whether making such decisions can cause even more panic amongst them.

Clearly, this can lead to a chain of dangerous consequences – from stigmatization, moral condemnation of those in self-isolation, through violation of public peace and order, to some much more serious criminal acts by citizens. Furthermore, this will also affect the Budget of Montenegro, because all citizens whose right to privacy has been violated – all while acting in accordance with the orders of the Sanitary Inspection, will have the possibility to seek compensation before the competent courts, invoking violations of national and international law.

The state must find a manner, within the legal framework and in accordance with all relevant international documents, to use legal instruments to discipline all citizens who are obliged to abide by the orders of self-isolation without jeopardizing their civil rights, even though it reveals that as a society we are still not mature enough to handle this situation adequately.

Also, we believe that the state has methods and powers to solve this problem through some kind of intensified or electronic surveillance, to implement all the measures prescribed by law and to establish general discipline without violating basic human rights principles and denying rights of the individual.