The Centre for Civic Education (CCE), with the support of the UK Embassy in Montenegro, presented today the first findings of media monitoring, but also social media, during the campaign for the Parliamentary elections to be held on 30 August 2020. The cross-section refers to the period from the first day after the deadline for submission of electoral lists, i.e. from 5 to 12 August 2020. 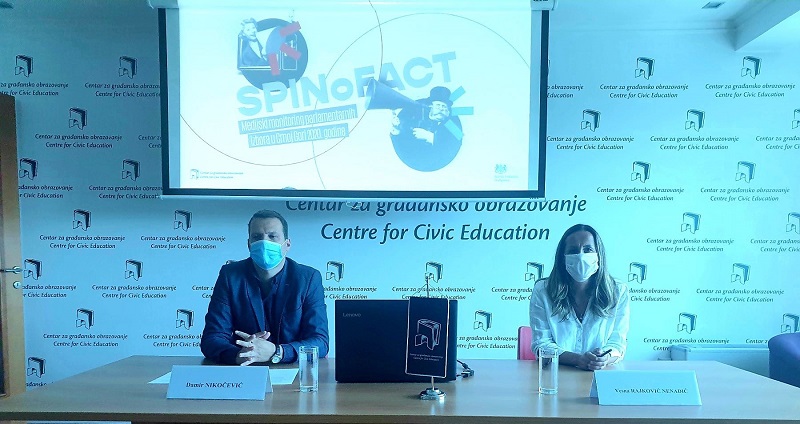 Damir NIKOČEVIĆ, the CCE Development Coordinator, while presenting media monitoring findings, stated that the number of publications is growing every day and that in the analyzed period, it reached 1637, in all three types of media, with most on portals (65%). Among the print media, the daily Dan (98) had the most publications, followed by TV Vijesti (119) and TV Prva (77).

“The CCE recently presented the findings of a public opinion poll on the attitudes of the citizens of Montenegro towards many socio-political issues that shape their needs and choices, and that research indicated that citizens prioritize those from the corpus of socio-economic ones. However, media monitoring shows that the parties, through their presentation, insist on identity issues (235 announcements), then on issues such as health (181), fight against corruption and organized crime (178), and judiciary and rule of law (165)” he explained.

The identity question dominates the list Decisive for Montenegro – DPS, while in the list of SDP – STRONG MONTENEGRO the most represented topic is the economy, and SD – We decide – CONSISTENTLY have the most announcements about youth and living standards. The Coalition Peace is our nation, led by the DEMOCRATS, has the rule of law as the most covered topic, and in the case of the Black on White list (URA-CIVIS), those are corruption and organized crime. In the Coalition For the Future of Montenegro (DF, SNP, PRAVA CRNA GORA…), the most common topics are the economy, identity and minority issues, corruption and organized crime, etc. All minority lists were focused on minority rights, as indicated by monitoring findings. 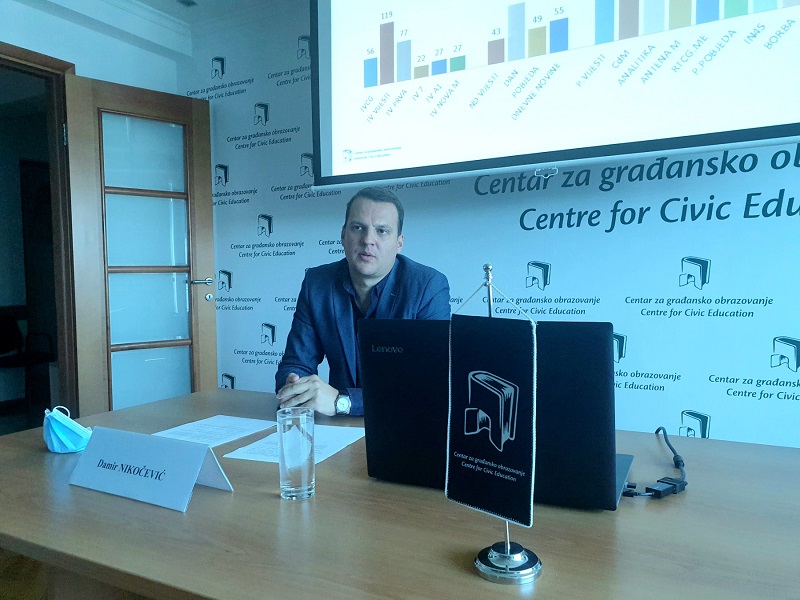 When it comes to the representation of electoral lists on television (expressed in seconds), SDP was the most represented on TV Vijesti – 753 seconds, SD – 610 and the Coalition Peace is our nation – 703, all also on TV Vijesti. The Black on White list was the most represented on TV Vijesti (914 seconds). The DPS coalition records the most time on TV 7, and the Coalition led by the DF on TV A1, but it is important to point out that this is a guest appearance of the representatives of that list in one-on-one talk shows. The same goes for the Albanian list – Genci Nimanbegu – Nik Đeljošaj, which had the largest presence on TVA1. TV 7 provided space only to DPS (964s), SD (188s) and HRS (72s).

In the print media, SDP had the most space (expressed in cm2) in Dnevne novine, SD in Pobjeda, Peace is Our Nation in Dan, as well as the coalition For the Future of Montenegro and the list  Black on White. The DPS was by far the most represented in Dnevne novine.

“During the observed period, the activities of state officials were pronounced, with that activity being mostly noted by the Prime Minister, Duško Marković, who had 204 planned media announcements, followed by Milutin Simović (46) with far fewer appearances. Of those 204 media announcements concerning the Prime Minister, most of them were on the portals RTCG (24), CDM (23) and Antena M (22). State officials from the SD list had 29 announcements in the capacity of positions they cover (mostly Kenan Hrapović, Minister of Health), while the Minister of Labor and Social Welfare Kemal Purišić from the Bošnjak Party was extremely active for the observed period”, said Nikočević.

“In political marketing, 1173 broadcast TV clips and 61 advertisements in the print media were recorded. In total, there were 56.5% on TVCG1 and TVCG2, 19.2% on TV Prva, 16% on TV Nova M. It is important to emphasize that advertising on RTCG is free in these elections as well”, concluded Nikočević.

“A total of 8.490 comments were analyzed on 128 texts on 8 portals, or an average of about 1.060 comments per day, covering the period from 5 to 12 August 2020“, said Vesna RAJKOVIĆ NENADIĆ, journalist and analyst on the project. 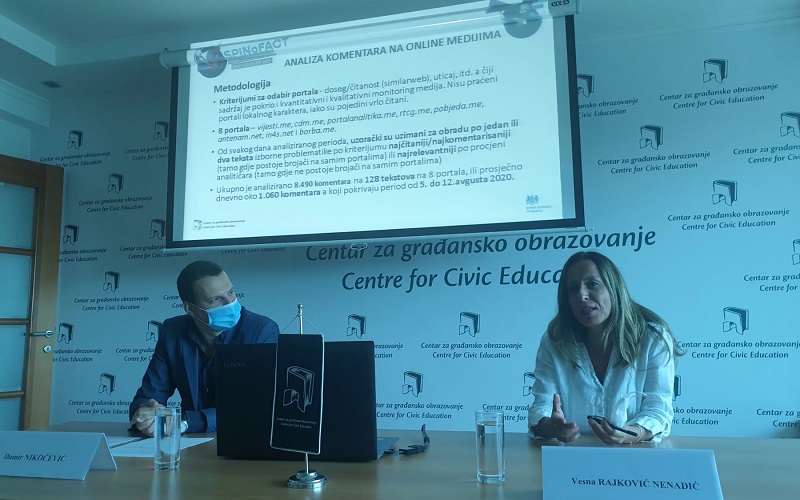 In the generated comments, it is tracked whether these spread and incite hatred or violence against persons because of their characteristics, with a focus on hate speech based on ethnicity, as well as against women and LGBT persons. Also, it was analysed whether the comments have other illegal content, according to the Law on Media (Articles 34-39, except for advertising), and especially insults, threats, swearing, etc.

“General findings indicate that most comments are dominated by a narrative of support or criticism of a particular political option. All analyzed portals had comments with elements of illegal content, although in different volumes. About 50% of the analyzed articles had comments on the disputed content, and there were examples that all comments on a text contain controversial content. In the comments, there are insults of persons on national and full/native basis, but also insulting insinuations on a personal basis”, explained Rajković Nenadić.

Commenting on the more detailed findings, she said that “most comments were published on the portals Vijesti and CdM, and the controversial narrative has less than 5% of the total published comments, while on the other hand the portals IN4S and borba.me do not have a large number of comments, but a dominant narrative of heavy insults and swearing, as well as hate speech on a national basis.”

“Comments for or against a political entity mentioned in the text predominate on the Vijesti portal, which leads to indications that the comments are published in an organized manner by activists of political parties. Also, there are no comments on some of the read tests or they are missing for a few hours after the publication, which can indicate that comments on these texts are completely or periodically blocked. The CdM and RTCG portals are dominated by comments in support of the DPS, which indicates that the comments on those parties are published in an organized manner by the activists of that party. These comments are similar and short, with the same keywords, and published mostly in the same time frame. The Pobjeda portal has almost no comments and only one controversial comment was found in the analyzed period. Portal Analitika also has few comments but comments containing severe insults have been noted, especially on several texts related to the elections and covering also the church issue. There are few comments on the Antena M portal as well, but there are comments that contain insults and swearwords”, she concluded.

The CCE team also analyzed communication of electoral lists on three social networks – Facebook, Twitter and Instagram. For Facebook, party accounts were used in independent appearances, i.e. leading constituents in coalition appearances, and some groups created special pages for this election campaign. Hence, a total of 12 accounts of political parties/electoral lists were analyzed. Also, 7 MEME pages were analyzed based on the number of followers, activity intensity, growth rate of posts and followers, as well as estimated political affiliations. The focuses were also on topics, tone/narrative and hate speech towards national groups, women, LGBT, etc. On Twitter and Instagram, the subjects were followed by the hashtag #izboriCG, but also in general.

“Overall, it seems that opposition parties have invested more energy and money on Facebook than the ruling parties. Communication with users is generally one-way, with rare exceptions when there is an exchange of views between administrators and followers. Electoral lists predominantly use their pages for promotion, whether it is fieldwork or just a political programme. However, elements of a negative campaign are also noticeable, which includes attacks on political competitors, and this refers to opposition parties that criticize the government and the consequences of its decisions (DF, Democrats, SDP, URA). Some opposition entities are also attacking the SDP (for example URA)”, said Damir Nikočević.

He pointed out that due to the complexity of coalitions, social media sometimes send confusing messages.

“Comments on election list posts mostly come from their voters/funs, but there are examples of conflicting opinions. Most of the comments refer to identity issues, while a smaller number refer to socio-economic issues or the rule of law”, he concluded.

MEME pages have a growing popularity in Montenegro, which was one of the reasons for their inclusion into monitoring, and the following were monitored: – Do you sleep peacefully Right side of the history, Montenegro Transparent, It was unpleasant/Psalm 118, Daily dose of Montenegrin dubiousness, MEMinistry of otherworldly affairs, Let’s not politicize the protests and Politics of Montenegro. 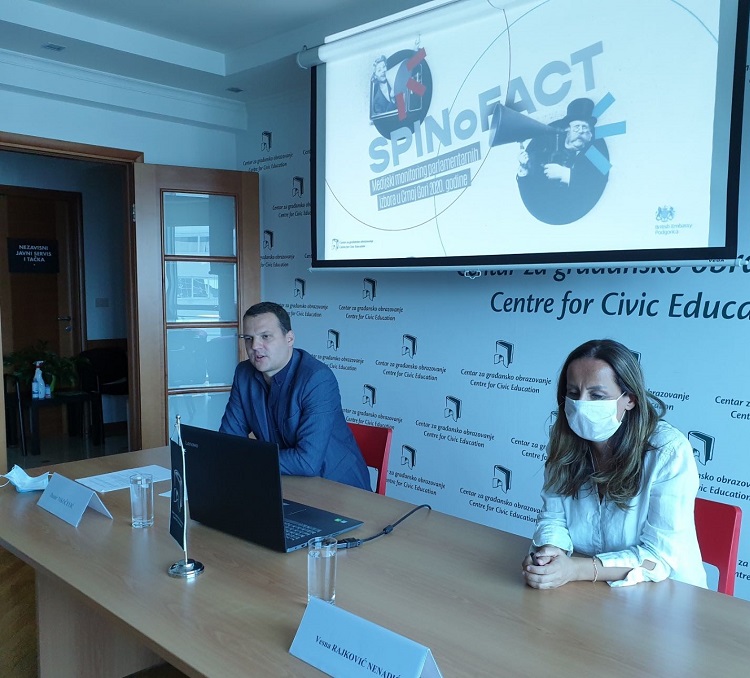 “The topics of the posts and the comments that follow them are diverse, and in short, these refer to current social and political issues that have the potential to provoke discussion, and unlike party pages, there are frequent discussions. Among the dominant topics in the observed period were freedom of expression (especially after the case of the arrest of the administrator of one of the MEME pages), the relation between the Serbian Orthodox Church and the Government of Montenegro, the use of state resources and official campaigns, etc. More than half of the monitored meme pages actively worked on reducing abstinence in the elections and informing the followers that the voting was secret, and some of them decided in public to support certain lists,” Nikočević explained.

“Hate speech was noted on these pages in the comments of the followers, whereby some administrators, in certain cases, drew the attention of the followers not to use hate speech, but that was not often enough. The most common examples of discrimination and hate speech are against citizens of the Islamic faith, members of the LGBTQ population as well as members of the RE population. Besides, there is an increase in misogyny under the posts in which women politicians appear”, he pointed out.

Electoral lists were not particularly active on Twitter and Instagram, nor did they use #izboricg as a hashtag. The most active on Twitter were the DPS and the Democrats, and the use of accounts from the President, the Government and the Assembly for pre-election purposes was not noted. Instagram is just beginning to be recognized as a way for political actors to communicate with supporters, but that is very limited for right now.

The project “SPINoFACT – Monitoring of 2020 parliamentary elections in Montenegro” is funded by the Embassy of the United Kingdom in Montenegro and represent a continuation of previous similar CCE’s activities in this area during the 2018 presidential elections, as well as the local elections in 2017 with a focus on the media. The project aims to contribute to the democratization and Europeanization of Montenegro by strengthening professional and independent media reporting. More precisely, the goal is to contribute to the fact-based informative value of media coverage of political campaigns and better-informing citizens about the election offer for the 2020 Parliamentary elections.