On the occasion of the 30 August – International Day of the Disappeared – Centre for Civic Education (CCE) urges the Prosecutor’s office of Montenegro, as well as other competent governing bodies, such as the Commission on Missing Persons of the Government of Montenegro, to, per regulation, with the adopted declarations and strategic documents, put in more effort towards elucidating destinies of all the disappeared during the war activities in the 90s in SFR Yugoslavia. 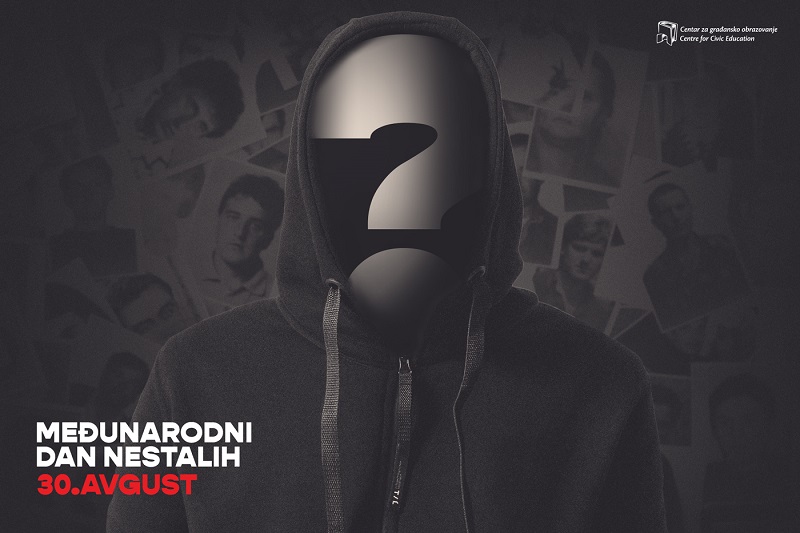 After more than a quarter-century since the wars which happened in ex-Yugoslavia, we are still having conversations about thousands of disappeared. However, not enough is being done to determine the facts about the victims and to identify their burial spots on the territories of the countries in the region. According to the data by the International Committee of the Red Cross, 34 886 people disappeared in the period between 1991 and 2001, while in Montenegro 51 person is still classified as a missing person, which for the country of this size represent the significant number. Every one of these missing persons has his life story which must be fully brought to light. Until that happens remembrance culture of the victims of enforced disappearance will remain on an unsatisfactory level in the region as well as in Montenegro.

European Commission has, in its’ last report on Montenegro, stated that unsolved destinies of the disappeared represent a humanitarian problem for the Western Balkans. Also, the Commission has stated that more effort needs to be exerted into identifying missing persons.

Unfortunately, there are no visible signs that there is an effort made to make the persecution of war crimes more efficient, via investigations, trials, and punishments conducted with accordance to international standards, and there is no proactive publishing of the information about undertaken operations, for the public to know what is being done to solve the destinies of the disappeared.

Victims and their families have the right to truth. Their unsolved destinies stand as a reminder to our non-functionality and irresponsibility. Hence, it is important to provide support to active, independent, substantive, and sustainable engagement and participation of families in the process of searching for the remains of their closest ones. Besides, it is important to give a contribution to the establishment of justice for victims and legal protection to ones that survived, with an unbiased and nondiscriminatory approach to the question of the disappeared, but also to enhance transparency in the processes of locating missing persons through dialogue and cooperation of associations of the victims with the governments.

The International Day of the Disappeared has been established in 1981. It resembles on the right of families to know the destiny of their closest who are categorized as missing persons. It relates to those people who have disappeared in war conflicts, natural catastrophes, migrations, persons to whom the contact with family was disabled, and it calls on a higher degree of professionalism and establishment of standards to respect the unity of a family, to identify missing persons and to provide information about their destiny.