Centre for Civic Education (CCE) assesses that the new constellation of relations within the Parliament of Montenegro made more dynamic the institute of Prime Minister`s question time which lasted five days, with 114 MPs questions addressed to the Prime Minister and members of the Government. Prime Minister Zdravko Krivokapić was responding to nine questions since all the MPs clubs used the opportunity to ask him the questions. AS for the members of the Government, the most questions were addressed to the Minister of Finance and Social Welfare, Milojko Spajić, and the least to the Minister of Public Administration, Digital Society and Media, Tamara Srzentić. 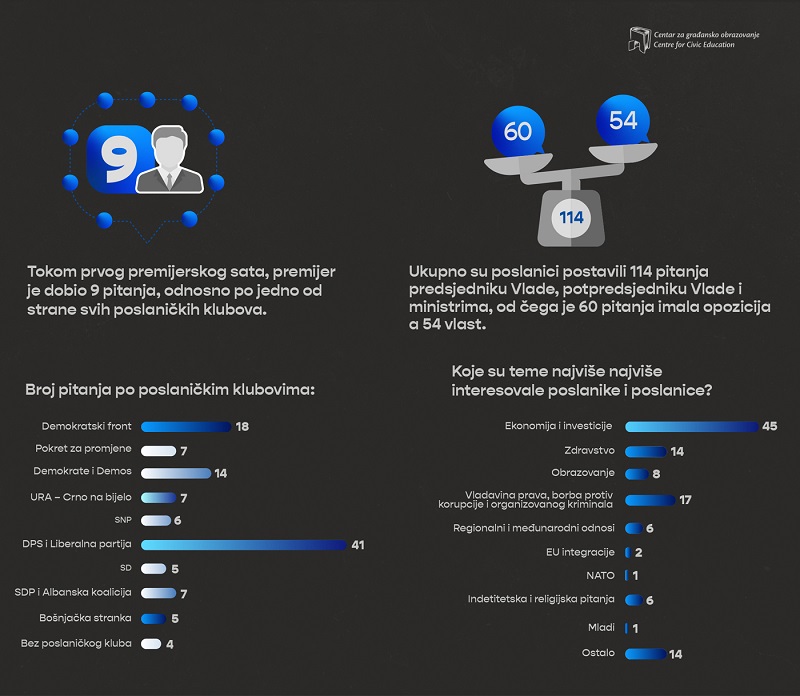 Out of a total of 105 questions that MPs addressed to the Deputy Prime Minister of Montenegro and ministers, most of them referred to areas that covers the Minister of Finance and Social Welfare, therefore Spajić was responding to 21 questions. The questions were mainly related to the process of the budget adoption, the details about the borrowing through the bond issuance and temporary financing. He is followed by the Minister of Health, Jelena Borovinić Bojović, who was responding to 13 MPs questions, dominantly about the epidemiological situation in the state and the dynamic of vaccination. Also, 12 questions were directed to the Minister of Capital Investment, Mladen Bojanić, which mainly referred to the current projects of oil and gas exploration, the highway and the establishment of a new state airline. Vesna Bratić, the Minister of Education, Science, Culture and Sports, was directed 10 questions by MPs, and most of them were interested in the position and further destiny of the Faculty of Montenegrin Language and Literature. For the Minister of Justice, Human and Minority Rights, Vladimir Leposavić, the MPs had nine questions and mainly about the announced changes of prosecutorial laws and position of the Venice Commission, as well as the fight against corruption and organized crime. However, this Prime Minister`s question time will also be remembered for his response to the question related to the Srebrenica genocide and victims of the genocide causing strong criticism of a significant part of the local and international public, which is why the CCE also called him to account.

Slightly more questions came from the representatives of the opposition (56) than the MPs of the ruling coalition (49). When these numbers are calculated within parliamentary clubs (parties), most questions came from the most numerous parliamentary club consisting of the Democratic Party of Socialist of Montenegro (DPS) and Liberal Party of Montenegro (LP) which sent 40 questions to the Deputy Prime Minister of Montenegro and ministers, followed by the Democratic Front with 17, Democratic Montenegro and DEMOS with 13  MPs questions. To this is added one question directed to the Prime Minister.

In general, the most represented issues were related to the economy and investments, followed by the rule of law, fight against corruption and organized crime, health care and the overall state of the society. MPs were more interested in identity and religious issues than the EU negotiation process or the youth perspective.

Last year, CCE published the review of the Prime Minister`s question time during the last convocation of the Parliament of Montenegro from the numerical point.