„Citizens are increasingly concerned about the direction in which the state is moving, the effects of the challenging economic situation are being felt by the vast majority, and changes for the better are hard to spot. The Memorandum on cooperation between certain parties in power and the opposition is assessed as positive, and the public expects that politicians will be above party differences and that they will think and vote in the public interest and make decisions which accelerate our European path“ are some of the findings of the December MNE pulse, which were published today, within a joint initiative, by Centre for Civic Education (CCE) and DAMAR agency.

The tendency indicates that the number of citizens who express concern over the direction of the state of Montenegro is constantly growing. The percentage of those who think that Montenegro is moving in the wrong or very wrong direction, according to the December MNE pulse, exceeds half (51.6%), while less than a third see this direction as good or very good. Montenegrins and minority people express above-average dissatisfaction with the current state of affairs. This opinion is presented both among the younger population and those with higher education. Citizens of Serbian nationality have the opposite attitude. 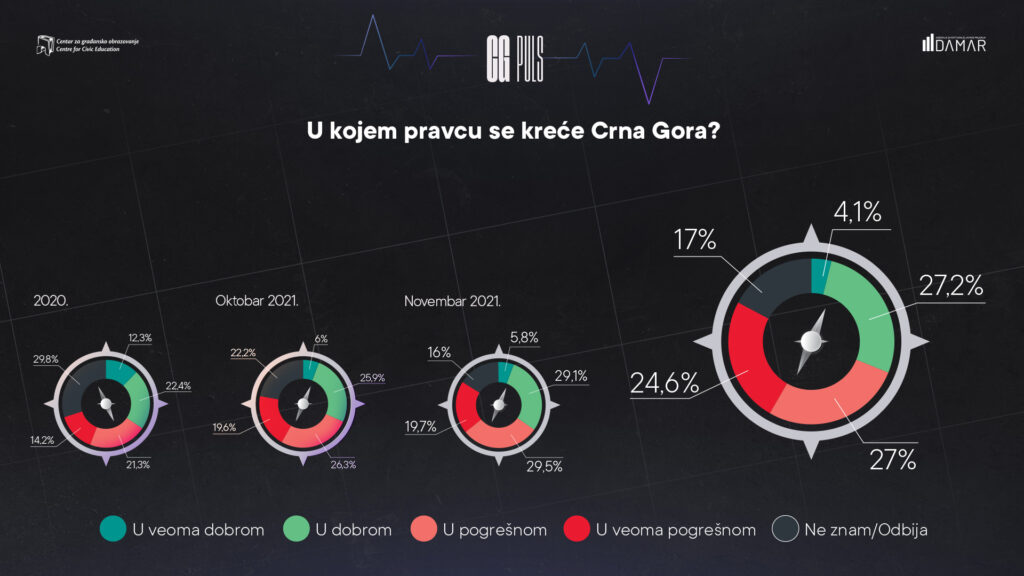 Slightly more than a seventh (13.8%) think that after a year of work of this Government and a year and a half since the establishment of the new parliamentary majority, many important things have changed for the better, while about a third (31.1%) see some minor changes. More than a quarter (26.9%) think that it is worse than at the time when DPS was in power, and a fifth (29.9%) believe that everything is the same, ie that nothing significant or qualitative has changed. In this part, too, above-average differences are identified at the ethnic level, so citizens of Serbian nationality are more positive, while significant improvements are least recognized by minority people, Montenegrins, but also young people and those with higher education.

“These data should be carefully analyzed by the current parliamentary majority and the Government, as they are a strong indicator of the betrayed expectations of citizens,” assessed Daliborka Uljarevic, Executive director of the CCE, reflecting on the research.

One of the key political events in December was the signing of a Memorandum of Cooperation by URA, SNP, CIVIS, and minority parties (Bosniak Party, Forca and Albanian Alternative). This act has the support of almost half of the citizens, while about a fifth has a negative attitude, and a third has no opinion. The majority is also convinced that the Memorandum will contribute to overcoming the polarization in society or that it will make an important contribution to the democratization of society and the inclusion of minorities. Every tenth citizen sees the Memorandum as a means of overthrowing the Government, and the same number of those who think that this document helps the DPS to return to power.

Opinions on the opposition’s withdrawal of the no-confidence motion against the Government are divided. More than a third believe that this is a tactical move and that the opposition will soon resubmit the Initiative and have a majority to remove the Government, while almost the same number of citizens consider that it was a propaganda move by the opposition and that it does not have a majority to remove nor will have. The number of those who cannot define their position on this issue is also significant.

The way out of the current political crisis is most often seen in the urgent call of early parliamentary elections (28.1%). This is followed by those who believe that the key is to change this Government and establish a transitional/minority Government for a period of about half a year or a year during which new elections would be held. Slightly more than a sixth believe that this parliamentary majority should continue to function as before, and when it comes to advocates of the reconstruction of the Government, there are more who support the reconstruction without Prime Minister Zdravko Krivokapic (15.3%) than with him (9.3%).

The formation of the Prosecutorial Council in full capacity has been on the socio-political agenda for a long time and only yesterday it ended in the Parliament of Montenegro. In the research implemented immediately before resolving this issue, those responsible for the delay in this process are usually the constituents of the parliamentary majority together, ie DF, Democrats and URA, but the responsibility of the Democratic Front, Democrats, opposition and at least URA is especially emphasized. Almost a fifth of citizens do not have an opinion on this issue.

The convincing majority of Montenegrin citizens believe that when voting in the Parliament, MPs should be oriented towards the public interest, ie what is best for the citizens and in accordance with EU recommendations. There is a small number of those who think that MPs should follow only the party’s position, and a minimal number of those who believe that this vote should always be directed in the opposite direction in relation to political opponents. 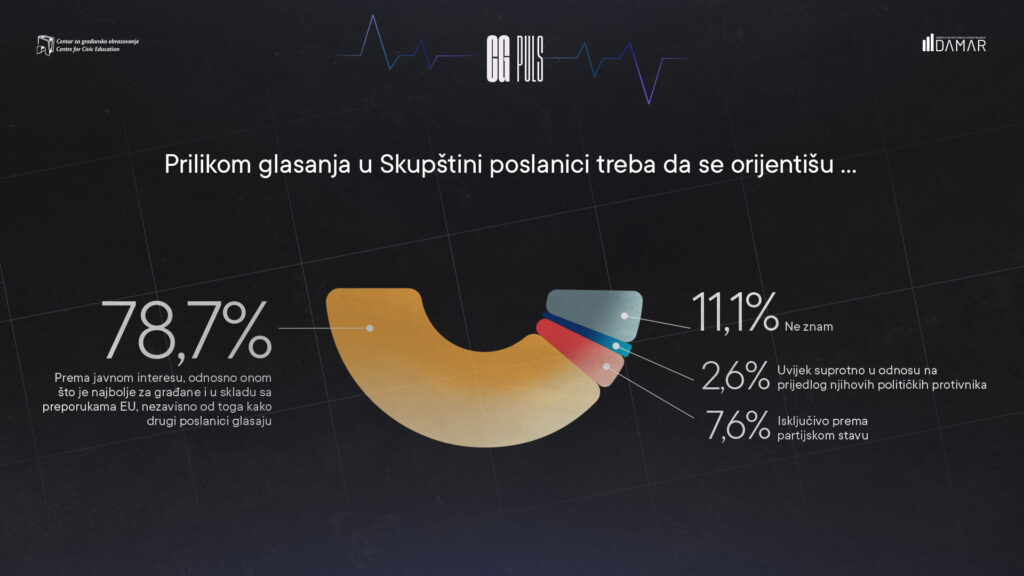 “This is one of the few attitudes in which citizens are united regardless of gender, age, education, ethnicity or party affiliation, although such an approach is often not close to those who represent them in the Parliament, which is an indicator of their focus on particular rather than the public interest.”, said in a comment Daliborka Uljarević.

One of the precedents that marked December was the absence of the Minister of Education, Science, Culture and Sports, Vesna Bratić, from the discussion about her interpellation, and this is not her first absence at the invitation of MPs or some other ministers. The vast majority of citizens (62.6%) assess that every minister must come to the Parliament at the invitation of the MPs, especially when discussing his/her removal, and almost a seventh is the opinion that the absence of a minister on call of the MPs represents the humiliation of the Parliament as an institution.

A special segment of the December research was related to foreign policy pillars through the perspective of citizens.

„As expected, most of them see there the European Union, which is recognized also as a major donor to institutions and organizations in Montenegro, but also as a source of the largest foreign investors in our country. Furthermore, in the mentioned segments, Russia, the USA, Serbia stand out, and to a much lesser extent, Germany, Turkey and China “, emphasized Vuk Čađenović, Executive director of  Damar agency, analyzing that part of the issue.

„Many citizens strongly feel the effects of the challenging economic situation, so when they add up all the income of their household, over 72% of them consider that it is difficult or very difficult to pay the necessary bills. In contrast, only one in five citizens can easily or very easily cover their expenses. And that is one of the rare issues in which differences between citizens are annulled “, concluded Vuk Čadjenović.

MNE Pulse is a joint initiative of the CCE and DAMAR aimed at creating an environment in which decisions relevant to the strategic shaping of society towards democratization and Europeanization will be made based on reliable data and thorough analysis. The intention of DAMAR and CCE is to help everyone who wants to focus on citizens through empirical data, which are published monthly, and which should consequently lead to improving the quality of public debate on important issues, but also raising the level of responsibility of all stakeholders.

The research was conducted from 21 to 26 December 2021, with the application of the CAPI method on a three-stage stratified random sample that consisted of 1001 Montenegrin citizens.