Centre for Civic Education (CCE) points out that now, after the EC Montenegro 2021 Report, but also numerous other assessments of relevant actors, the Government Report on the Implementation of the Programme of Accession of Montenegro to the European Union 2021-2023, for 2021, adopted on Government Session on 26 January 2022 confirms that European integration was not a priority for this Government, which is illustrated by the very limited effects of ministries in all parameters when it comes to fulfilling obligations on the path to the EU.

The results of the analysis of the degree of efficiency, i.e. the percentage of (un)implemented commitments in each chapter are an indicator of neglect of key negotiating chapters with the EU, and there are chapters in which no commitments at all have been realized. Out of a total of 284 obligations in 2021, 159, or 56%, were fulfilled. Furthermore, out of 76 strategic documents, 45 or 59% were done, and when it comes to laws and bylaws, the percentage of implementation is 55%, ie 114 out of the planned 208 obligations were realized. The CCE emphasizes that this percentage had to be higher and the obligations had to be done more promptly and efficiently.

It should be noted that the number of commitments varies between ministries, but this does not affect the accountability of the competent ministers for implementation, and there is an obvious discrepancy in their commitment to this work. This, although without mentioning individual ministries, was also pointed out by the European Commission in its Report. Even then, the CCE representatives assessed that the Ministry of Education, Science, Culture and Sports and the Ministry of Justice, Human and Minority Rights were the most problematic, which is now officially confirmed. 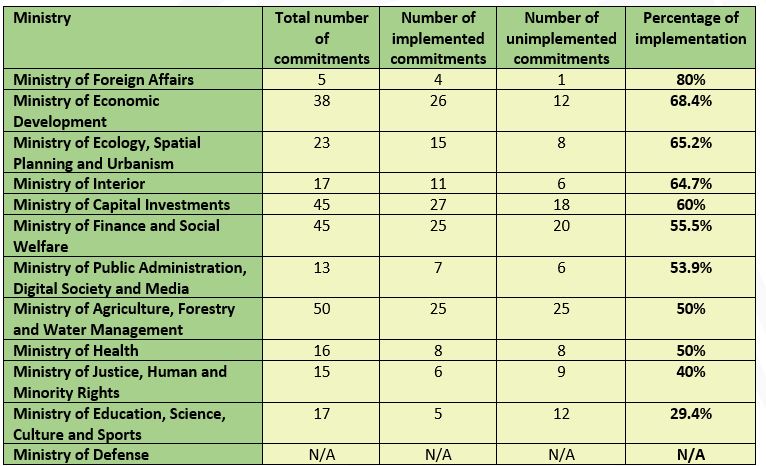 The Report also deals with the implementation of activities by negotiating chapters. These data indicate that most activities were implemented in chapters 3 (Right of establishment and freedom to provide services), 5 (Public procurement), 6 (Company law), 18 (Statistics), and 33 (Financial and budgetary provisions) where the effect is 100%, followed by chapters 4 (Free Movement of Capital) with 85%, then 2 (Freedom of Movement for Workers) with 83% and 30 (External Relations) with 80%. On the other hand, a worryingly low number of activities was implemented in chapters 26 (Education and Culture) – only 23.08% and 29 (Customs Union) – 25%, while no planned activities were implemented in chapters 7 (Intellectual Property Rights), 11 (Agriculture and rural development), and 22 (Regional Policy and Coordination of Structural Instruments).

CCE assesses that these indicators are warning and that maximum efforts must be made urgently to unblock the process of European integration, which requires professional and dedicated work on the implementation of commitments. Only in this way can we await the next report on the performance of commitments undertaken on the path to the EU with the significantly smaller number of unfinished homework.