“Concerns about the situation in the country and its future are expressed as never before, the programme Europe now has great support, although differences in the attitudes of employees and employers are identified, the potential for protests due to a no-confidence motion in the Government of Zdravko Krivokapic, dismissal of the President of the Parliament Aleksa Bečić and the formation of a minority Government is very limited. Public support for the abolition of fees for officials is almost undivided, and it is also significant when it comes to holding elections in one day. The complexity of socio-political relations and social events leads to an increasingly pessimistic attitude of citizens about the speed of EU accession“, indicated some of the research findings of the February MNE Pulse, which were published today within a joint initiative of the Centre for Civic Education (CCE) and the DAMAR agency.

The previously established trend of growing concerns about the direction of Montenegro’s movement is continuing. “Now, the percentage of those who consider that Montenegro is moving in the wrong or a rather wrong direction has reached a record share of 62%, while less than a fifth think that this direction is good or very good. Montenegrins and minority nations, as well as the younger population and those with a higher level of education, still express above-average greater dissatisfaction with the current state of affairs. Citizens of Serbian nationality have a more positive perception of the situation,” stated Daliborka Uljarević, Executive Director of the CCE, commenting on the findings of the research.

These data are supported by the assessment of slightly less than a third of citizens that this is a time of crisis, whereas over one-fifth believe that we stagnate, and about one-seventh that the country is on the brink of disaster. It is indicative that in comparison with the November MNE Pulse, the number of those who believe that the situation in the country is stable has dramatically decreased, as well that the country is developing slowly but steadily.

The programme Europe now is supported by the vast majority (80.4%), and a large share of citizens believe that the current salary increase is realistic and sustainable (74.8%). However, the opinion (95.5%) that food prices and costs have increased is almost unanimous, and more than a quarter of respondents (27.3%) know someone who lost the job because the employer could not pay the new minimum wage. The majority believes that the new government will continue the programme Europe now (40.6%), while one-quarter (25.6%) do not believe in it, and over a third cannot estimate it now (33.8%). 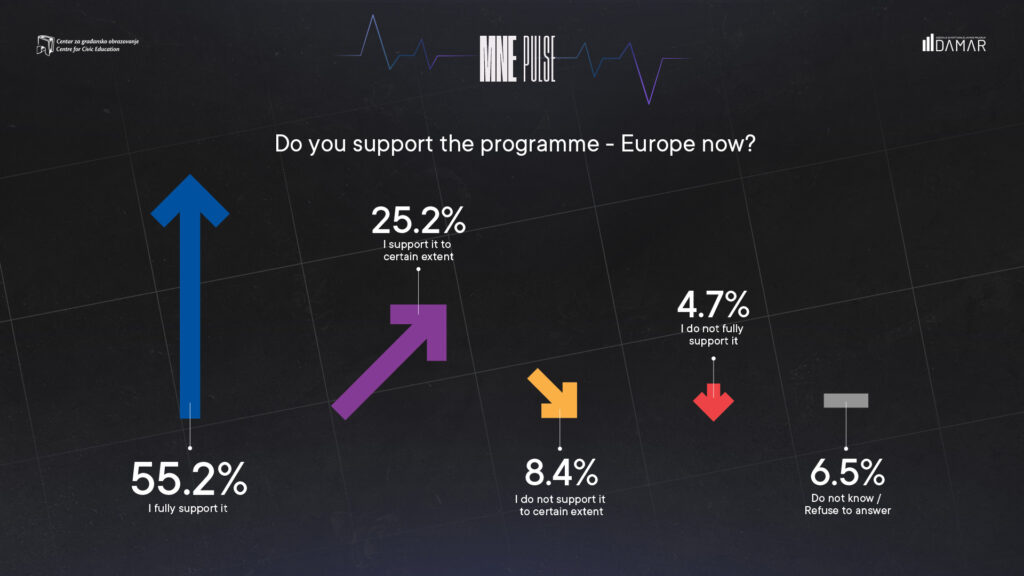 “Differences can be noted within employees and employers, because employers express support to a lesser extent and more cautiously, and they are cautious regarding the sustainability of this programme, i.e. as many as one-fifth think that it is unrealistic in the current Montenegrin context. Also, there is a higher percentage of employers who state that they know someone who lost their job due to these changes,“ explained Vuk Čađenović, Executive Director of agency DAMAR.

“Our findings also indicate that the potential for protests against these dismissals, but also the formation of a minority government, is very limited. Namely, almost two-thirds of citizens (65.2%) state that they would not protest because of that, explaining that they do not want to defend anyone’s function or that they do not find anything disputable in more frequent changes of persons in high positions. On the other hand, about a quarter (25.1%) would protest, stating that the electoral will had been betrayed or that they did not want the DPS to return to power. The share of those who do not have an opinion on this issue is below 10%,” said Uljarević. 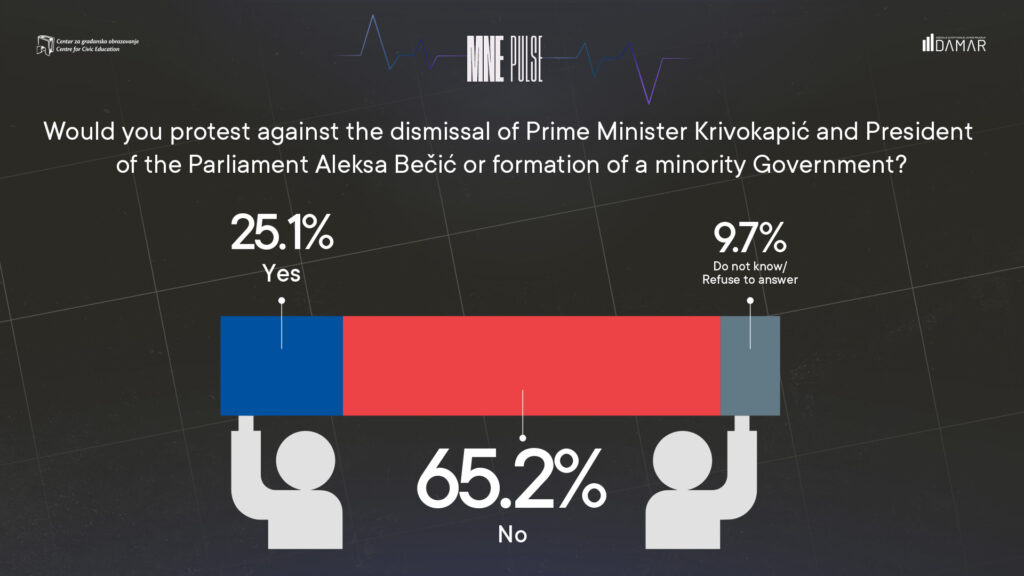 The actions of Prime Minister Krivokapić after the vote of no confidence are assessed rather negatively, with 48% of citizens who believe that the Prime Minister fought only for his position and interests until the very end, while less than a third (30%) believe that he is trying to work in the interests of all citizens, and over a fifth are not determined on this issue.

“It seems to be no illusions about the duration of the planned minority government. Citizens generally predict it between six and 12 months, and only less than a sixth estimate that it could be until the end of the mandate, while almost a third cannot decide on this issue,” said Čađenović, commenting on the data.

Citizens are much more determined when it comes to the goals of that government. Thus, as they see the set of priorities preparation of elections, unblocking the EU negotiations and calming tensions in society (39.5%), which is mostly supported by those who declare themselves as Montenegrins and members of minority nations, as opposed to the set that includes the preparation of elections, passing of the Basic Agreement with the Serbian Orthodox Church (SOC) and the census (15.4%), which has the dominant support among Serbian citizens. In addition, maintaining and/or improving living standards and stopping the growth of living costs are positioned as important issues, as well as the fight against corruption and crime, and there are no statistically significant differences. Finally, suppressing the influence of the SOC and protecting the environment are among the priorities. 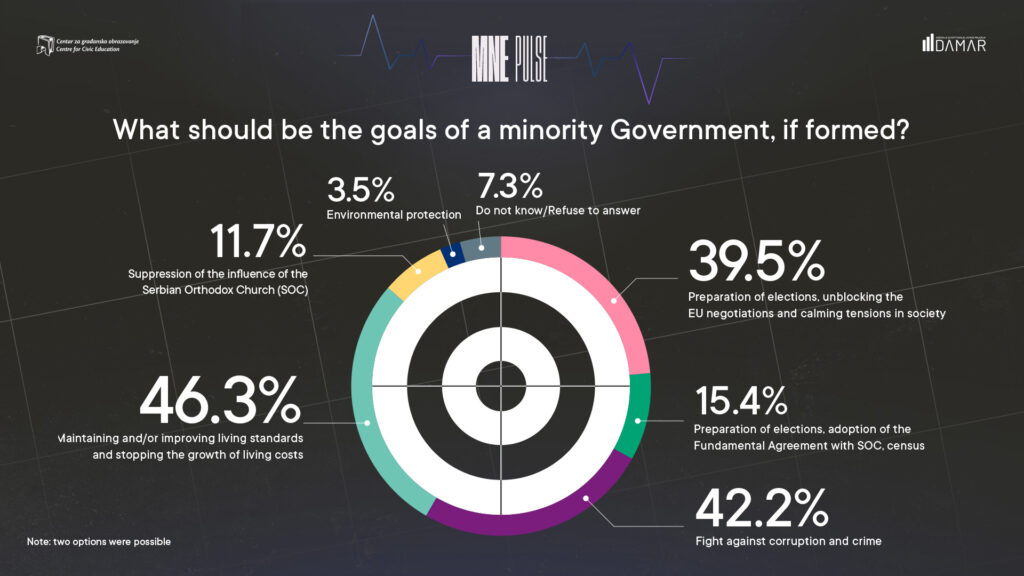 The idea of ​​ unification of local elections in one day is supported by 67.7% of respondents, and there is slightly more support among those who are supporters of the current parliamentary majority.

“Citizens have a unified position (82%) that compensation for officials should be reduced, with no differences between supporters of different political parties, those of different nationalities, educational levels or ages. The CCE recently submitted amendments to certain legal provisions to all parliamentary groups in order to abolish or significantly reduce these compensations. It will be interesting to see whether and for how long the MPs will ignore this attitude of the citizens,” stated Uljarević.

“The difficult situation has aggravated Montenegro’s path to the EU, which is reflected in the opinion of citizens about it, and thus more than a quarter have a pessimistic attitude that we will never enter the EU, or that it will be in 2030. A large minority are those who state that it could be 2025 or 2027, while almost a quarter cannot estimate. It is worrying that young people and those with higher education are the least enthusiastic, while there is no significant statistical disparity when it comes to pessimistic ones”, concluded Čađenović.

MNE Pulse is a joint initiative of the CCE and DAMAR agency aimed at creating an environment in which decisions relevant to the strategic shaping of society towards democratization and Europeanization will be made based on reliable data and thorough analysis. The intention is that empirical data, which are published monthly, help everyone who wants to focus on citizens,  and which should consequently lead to improving the quality of public debate on important issues, but also raising the level of responsibility of all stakeholders.

The data collection was conducted from 17 to 23 February 2022, with the application of the CAPI method on a three-stage stratified random sample that consisted of 1002 Montenegrin citizens.