Centre for Civic Education (CCE) conducted monitoring of comments on internet portals in Montenegro, from April 1 to 30, with an accent on respect to the Media Law. This is the second round of monitoring in just over a year, and the findings, unfortunately, do not indicate progress in respecting legal obligations in editing comments, particularly in the representation of hate speech and insults. 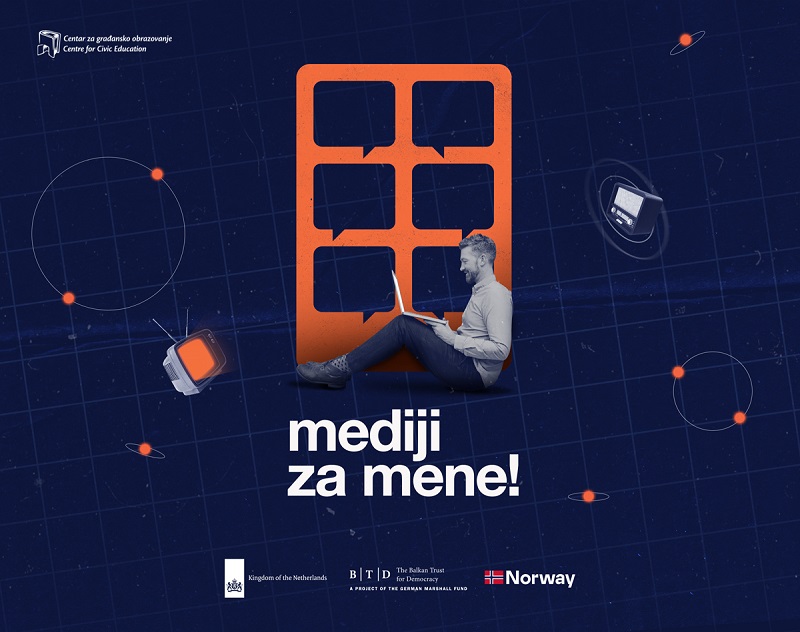 CCE reminds that the Media Law, which entered into force in August 2020, introduces a number of novelties, primarily regarding the obligations of the portal’s editorial staff to remove comments of illegal content under the threat of misdemeanor liability, within 60 minutes from getting the information, ie application.

On a daily basis, CCE team reviewed comments on a total of 11 portals in Montenegro – Vijesti, CdM, Analitika, RTCG, AntenaM, In4S, Pobjeda, Aktuelno, Standard, Borba, and in relation to last year’s monitoring, the newly established portal Dan was included. The texts within which the comments were reviewed (2 texts per day per portal) were selected according to the criteria of the most commented or read, or by the personal choice of the analyst for those portals where such a review is not available.

During the 30–day monitoring, a total of 15,248 comments were reviewed, which were published within 660 texts, or 60 texts per portal. The number of comments daily ranged between 211 and 1,366 comments on the level of all portals, with an average of 508.26 comments on a daily basis or, on average, something more than 23 comments per text.

The monitoring included some important socio-political events, such as negotiations on the formation of the 43rd Government, the vote of the Government, the election of the President of the Parliament, but also the arrest of the former President of the Supreme Court of Montenegro, Vesna Medenica. These are also the events that attracted the most attention of readers, so the days when these issues dominated the media were accompanied by increased activity of commentators. Hence, on the day of the apprehension of Medenica (18 April), the largest number of comments was recorded on a daily basis on all portals of 1,366 or 8.95% of the total number of comments. On the day when the new President of the Parliament and the new Government of Montenegro were elected (28 April), there were a total of 1,034 comments on all selected texts or 6.78% of the total number.

On certain portals, automated, so-called Internet troll comments, followed texts about Serbian President Aleksandar Vučić, as well as texts about Andrija Mandić, one of the DF leaders. These comments were characterized by a specific style, standardized names of the authors, and above all a positive narrative in relation to the persons reported in the texts.

The content analysis of the comments again indicated serious shortcomings, given that they often identify hate speech, incitement to intolerance or violence, misogyny, homophobia, but also other narratives that are against the law, such as violating the presumption of innocence. The comments often and significantly depended on the discourses expressed in the text itself on the portal, on the topic it treats, and certainly on the person who makes the statement or to whom the text refers.

In the context of Article 36 of the Law on Media, which, among other things, prohibits the publication of comments expressing ideas, claims and opinions that provoke, disseminate, encourage or justify discrimination, hatred or violence against a person or group of persons because of their personal, political, religious and other beliefs, were dominated by comments with hate speech on national or religious grounds, usually aimed at Montenegrins or Serbs, and often members of minority nations, followed by comments with hate speech against the LGBT population and comments of a misogynistic character.

This legal provision was mostly violated in the comments on In4S portal, where out of 60 selected texts, as many as 51 contained comments contrary to this article of the Law. Portal Analitika had 38 in the same number of selected texts that contained comments contrary to this article, portal CdM 31, portal Vijesti 29, portal RTCG 28, Aktuelno 25, Borba and Pobjeda with 23 each, while the portals AntenaM had the least such texts (13), Dan (12) and Standard (1).

When it comes to other articles of the Law on Media that regulate this area (Articles 34-39, except separately analyzed Article 36), numerous irregularities are again noted. Namely, a large number of comments were recorded which violated the presumption of innocence (Article 34), but also those with insults that violated the honor and reputation (Article 39). The largest number of texts with comments that violate the mentioned articles of the law was noted on In4S portal, were within 60 selected texts, as many as 40 were with comments of disputed content. It is followed by the portal Borba with 32 such texts, portal Aktuelno with 31, Analitika with 23, Pobjeda with 16, Vijesti with 15 and CdM with 14. A single-digit number of such texts was registered on the portals AntenaM (7), Dan (4), RTCG (3) and Standard (1).

Monitoring of comments on information portals was conducted within the project “Media for me!”, implemented by the CCE with the support of the Embassy of the Kingdom of the Netherlands, the Ministry of Foreign Affairs of the Kingdom of Norway and the Balkan Democracy Fund of the German Marshall Fund (BTD).