Wider and more systematic efforts are needed for Montenegro to be a society of media literacy, as only a citizen who critically and meaningfully “reads” traditional and new digital and social media can make independent decisions, which is the basis for strengthening an open and progressive society.

This was announced at the final conference Youth and Media Literacy, organized by the Centre for Civic Education (CCE) within the project  “Media literacy to develop the talents of high school students – SMART! implemented with the financial support of the Ministry of Education. 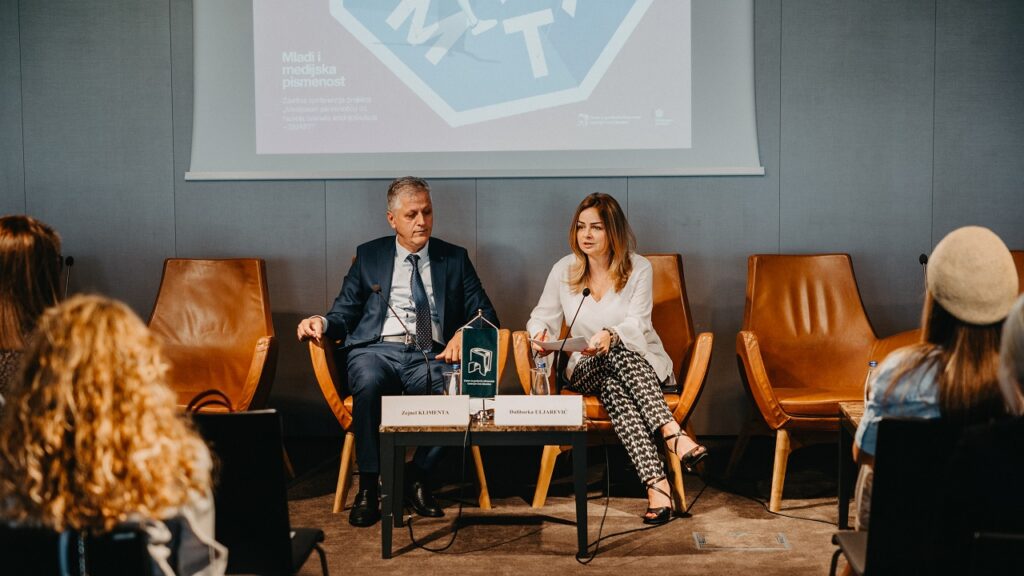 CCE Executive Director, Daliborka Uljarević, referring to the project results, pointed out the importance of media literacy as a need and direction to content in the media and social networks, but also the fact that relevant international research positions Montenegro at the bottom of the scale of countries where the measurement of media literacy is done.

“Low media literacy index, lack of strategy in this area and declining interest in attending classes, are just some of the challenges that require an institutional response through additional efforts of relevant bodies and academic institutions, but also the involvement of international organizations, NGOs and student associations to affirm media literacy”, stated Uljarević.

She emphasized that CCE advocates for wide public acquaintance with the role of the media and the value framework that media create in relation to the one it would be desirable to create. „In this context, we must all insist on factual reporting, respect the Code of Journalists, as well as the suppression of space for sensationalism in the media and the influence of advertisers. We are a society that is slowly democratizing and Europeanizing, and the media can be supportive if they put the public interest high, but also bring a new burden if they choose to, for different interests, be channels for spreading spins, disinformation and/or fake news“, she said.

“In Montenegro, there are a number of portals through which false news are intensively spread and attempts are made to discredit dissidents, and some of them are not even registered in accordance with the Montenegrin legal framework. Such media approaches to manipulatively influence public opinion must not be an alibi for generalizations and disqualification of those media and journalists who do their job professionally and ethically, nor should bad examples be used to restrict freedom of expression”, Uljarević was clear.

She concluded that “only a citizen who critically and meaningfully “reads” traditional and new digital and social media can make independent decisions, which is the basis for strengthening an open and progressive society“.

The State Secretary in the Ministry of Education, Zejnel Klimenta, pointed out that projects of this character are necessary having in mind the problems that young people, as well as other social groups deal with.

“It is very important that those who are not directly related to this project are involved in these efforts, because everyone can make a contribution to approach this issue systematically, to bring it into a context so that each of our children is media literate, to distinguish what is worth from what is not worth in the pile of information with which we are all overwhelmed today”, Klimenta pointed out.

Klimenta said that the Ministry of Education is ready to contribute and participate in every project related to topics that can improve the functioning of the education system and the environment for the development of young people in society.

“I think it is necessary to introduce this issue into the educational system in the form of a school subject, where students would have the opportunity to get to know these topics in a systematic manner. In that way, they can learn to deal with this problem at an early age, and they will later be the leaders of such projects, in order to improve the environment in the whole society, and especially in education and communication in general”, said Klimenta.

Within the panel “What do young people in Montenegro read, watch and listen to? How to improve the media literacy of young people? “, a member of the Parliamentary Committee for Education, Science, Culture and Sports Aleksandra VUKOVIĆ said that in a conversation with the current Minister of Education she emphasized the need to establish a quality approach. 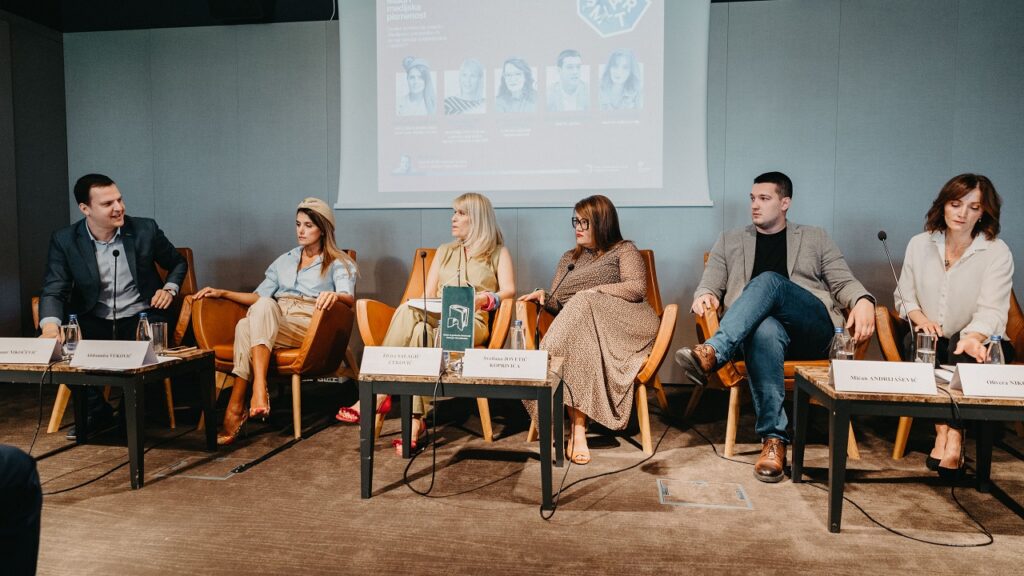 She said that she could not accuse young people of not reading, because such is the contemporary media culture, a digital society in which, as she stated, they are pressed by numerous pieces of information that are faster and more interesting than those they receive as school content.

“It surprises me how it is possible for someone to come to the first year of study, to finish high school but not read Hamlet. I wonder what kind of supervision of the teaching staff is in place … How did we allow the student to leave the school without reading Hamlet? ”, Vuković wondered.

She announced that she would initiate a session of the Committee on Education, Science, Culture and Sports as soon as possible, which would be thematically dedicated to media literacy, in order to encourage systematic consideration of this issue.

Elvira Salagić Ceković, Head of the Public Relations and General Affairs Service at the Agency for Electronic Media (AEM), pointed out that it is not possible to talk about whether the media are good or bad, but about the way we are consuming them.

She reminded of the AEM research on the habits of the media-consuming by children, which showed that children watch less and less television, stating that they are looking for more content online.

“This indicates that it is necessary to engage the media to reach our children, to create content that is attractive to them so that we can positively influence them. On the other hand, this reminds us of the great role of the state, as well as parents, teachers and the whole society”, said Salagić Ceković.

She considers that a new generation of “Zoomers” is currently represented, which is growing with technical innovations, technically well-based, but without a developed critical awareness.

“The generation gap is slowly melting. That is why students love Media Literacy, as it is what is alive, contemporary and interesting. It is true that new generations no longer cultivate equal interest in traditional media, that social networks are a greater risk for us “from the last century”. On the other hand, it is important to give them tools, encourage them and do not doubt that they will be able to know how to use them”, said Jovetić Koprivica, assessing that media literacy should be a mandatory content in schools.

The representative of the NGO Juventas, Mićan Andrijašević, assessed that media literacy can be improved through topics and ways in which young people are addressed.

“When it comes to topics, we must provide all young people with knowledge about the basics of media literacy, the role of the media, the type of media, how to think critically and judgmentally, teach them that the media creates content from reality, that the audience interprets meaning. That is what we should strive for “, stated Andrijašević.

He believes that media literacy should be improved through formal education, stating that secondary vocational schools must not be excluded from it, and that it should be considered that the subject of Media Literacy be introduced also in the primary schools. 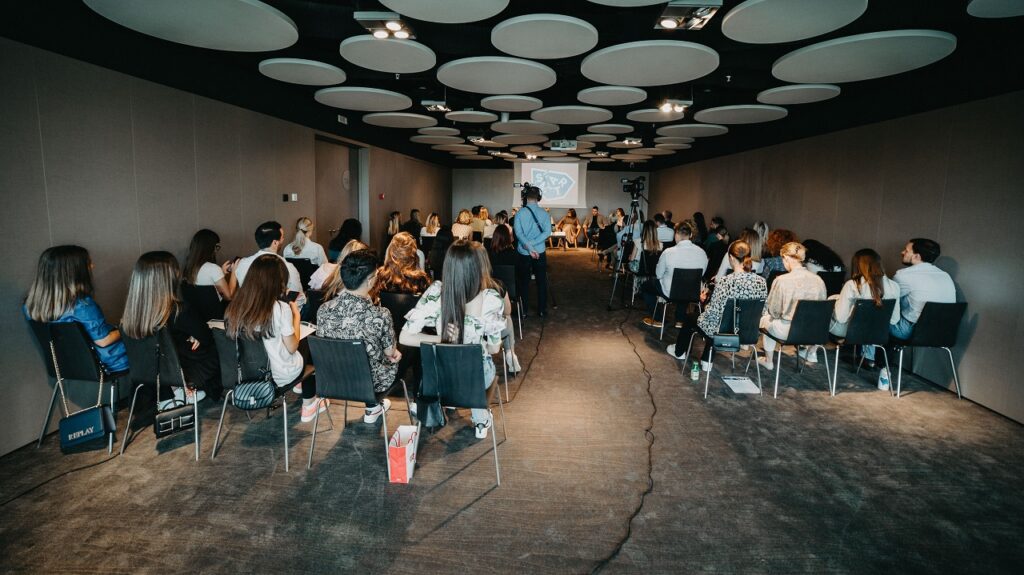 The director of the Montenegrin Media Institute, Olivera Nikolić, believes that the relationship between young people and the media is confusing, stating that there is a big misunderstanding.

” A great responsibility for that we have – the creators of politics, media content, the civil sector. If we take into account that they are future decision-makers, people who want to get involved and contribute to the community, we are in big trouble, because we do not know what their habits are – what they listen to, watch, read, where they spend their time. The big problem is that we do not know the habits of young people when it comes to the media“, said Nikolić.

She pointed out what is known – that traditional media is an abandoned category for young people, stating that they predominantly spend time on social networks. “That means they spend time on content that someone serves them. This is a huge problem”, Nikolić believes, assessing that there is a lack of research on the needs of young people, so that we can understand them.

She believes that media literacy, through the education system, is not enough.

During the discussion, which gathered app. 60 participants, the importance of comprehensively educated people, who can be critical and analytical, was emphasized, as well as the need to instruct young people on what values are.

The high school students, who participated in the project, pointed out that the textbooks they are learning from are outdated and do not follow the current trends when it comes to technology, and that they need to be made modern.