The rise in prices is the biggest concern of citizens who do not see an improvement in living standard, but also do not recognize merit-based human resource management of the new Government but pointing out the continuity of the power of the party book over expertise, being reserved towards the changes in the judiciary, and the new chief special prosecutor has failed to position himself as someone for whom there are no untouchables. Citizens are worried about the direction in which the state is moving, and even without the turbulence over the Fundamental Agreement, they did not look upon the Government as sustainable. The Economic citizenship programme is not supported by the majority, and the dominant belief is that there is insufficient information about the Open Balkans. Strong opposition to Russian aggression against Ukraine, and consequently stronger support for the NATO alliance, are the key findings of today presented MNE Pulse, published by the Centre for Civic Education (CCE) and the DAMAR agency. 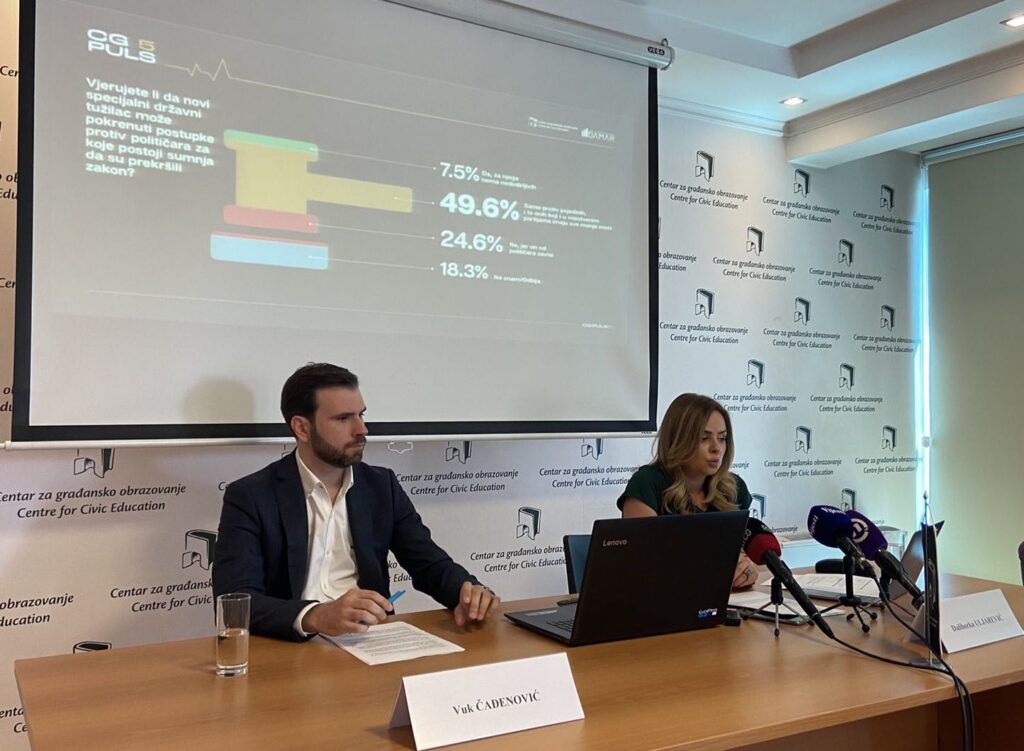 Compared to half a year ago, there are slightly but fundamentally not so significant changes when it comes to the perception of the direction in which Montenegro is moving. “More precisely, more than a third of the respondents believe that the country is moving in the wrong direction, while an additional 18.6% believe that we are going in a rather wrong direction. Cumulatively, more than half (54.2%) consider that there is a negative trend in that movement. In contrast to them, around 22% of respondents believe that we are moving in a positive direction, while every fourth respondent is undecided. It is similar to the assessment of the situation in the country, and when compared to the previous period, there is a certain decrease in pessimism, but not a significant increase in optimism, with a large number of citizens avoiding defining the situation“, said Vuk Čađenović, Executive director of Damar agency.

Eight out of ten citizens are most concerned about the rise in prices, followed by corruption (more than a third), but also unemployment (29%). Every fifth citizen is concerned about issues of internal and international instability and the possibility of conflict.

“The priorities of the minority Government should be those topics that are at the same time the biggest concerns of citizens: the fight against organized crime and corruption (42.7%), the recovery of the economic situation (42.1%), unblocking negotiations with the EU (37.6%) and the reduction of tensions in society and election preparation (36.3%). At the bottom of the list of priorities, the respondents cited the signing of the contract with the SOC (11.5%), joining the Open Balkan initiative (5.2%), and population census (5.3%). Additionally, and perhaps worryingly, environmental topics are recognized as important by only 2.6% of citizens“, stated Čađenović. 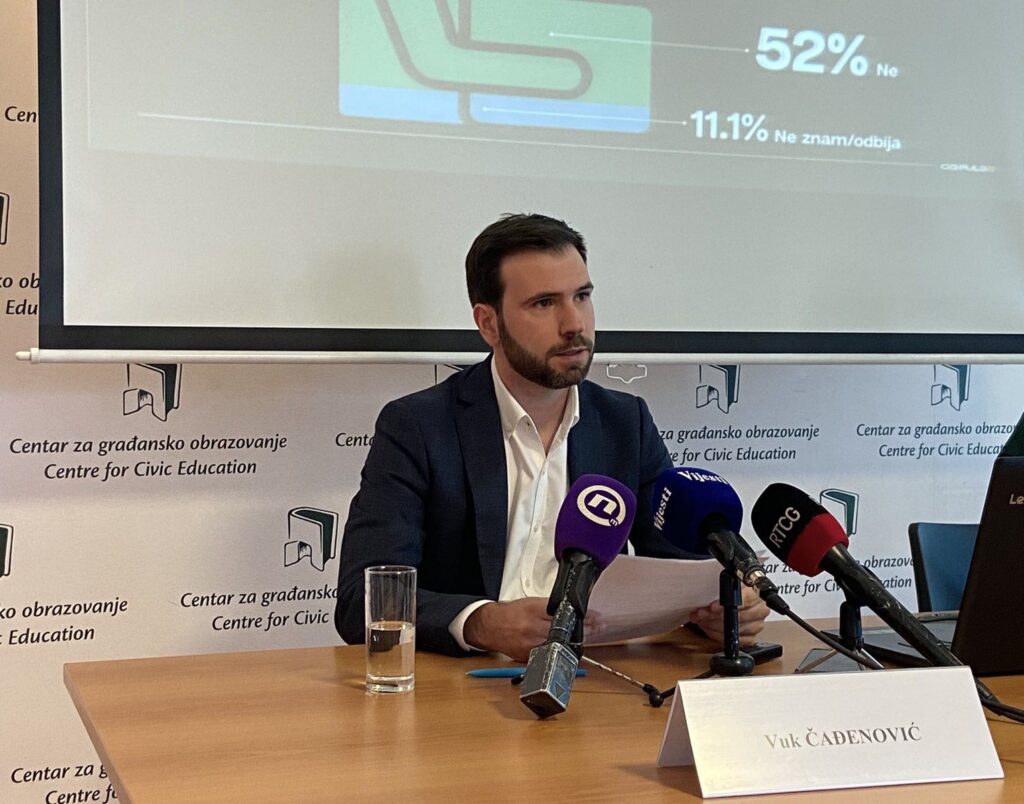 “With this MNE Pulse, we tried to compare what the citizens think should be the key criteria for the new Government when appointing people to positions and which criteria they see in practice. It is clear that the citizens of Montenegro want the executive power to be based on a merit system, so they agree that the primary priority should be expertise in the field to which that function applies (74.7%), but also that for those persons are no allegations or suspicions that they have committed abuses during their previous positions for personal or party interests (61.1%). On the other hand, they recognize party membership (62.8%) as the de facto most important criterion in these nominations, expertise in a significantly smaller number (26.4%), but also a revanchist approach that excludes those who are members of opposition parties (19.2%), and it seems that in practice it is least important to those who make nominations what was the previous performance of the persons they nominate (12.7%)”, said Daliborka Uljarević, Executive director of the CCE.

“Even before the vote on the text of the Fundamental Agreement with the SOC, which we see has opened a process that can lead to the dismissal of this Government or the shortening of the mandate of the Parliament, there was almost a third (31.7%) of those dissatisfied with its work, a fifth (24.1%) had passing grade, while a little more than a quarter (22.3%) rated her work as good, only one in seven respondents gave the work a very good grade, whereas only 6.2% gave it an excellent grade. The Government was given the strictest ratings by young people, as well as those who identify themselves as Serbs and Montenegrins“, states Uljarević.

The opening of the Government’s sessions for live broadcasting has enormous support, although there are not a few who believe that many decisions are still made outside the public domain, while there are also those who appreciate that it is a hasty decision and that the Government’s image from those sessions is bad.

“Some 45.2% of citizens oppose the controversial Economic citizenship programme, which was extended by the Government of Zdravko Krivokapić against the recommendations of the EC, but continued and even facilitated by the Government of Dritan Abazović, less than a third (31%) support it, and slightly less a quarter (23.9%) do not have an opinion”, highlighted Daliborka Uljarević, commenting on certain issues covered by this MNE Pulse.

Uljarević further clarified that “even though the Open Balkans initiative is one of the issues in the focus of political discussions, there is no majority belief that the Government has given clear arguments for and against, nor that the Government has an agreed position on the issue, which further contributes to the confusion, because less than a quarter believe that the Government was clear on this issue. Consequently, despite the considerable presence of this topic, respondents predominantly (53.2%) do not consider themselves sufficiently informed. Out of the 31.2% of those who consider themselves informed enough to form an opinion, 70% support this initiative and 30% are against it. The supporters are mostly supporters of DF, SNP, URA and the party of former ministers Milatović and Spajić” 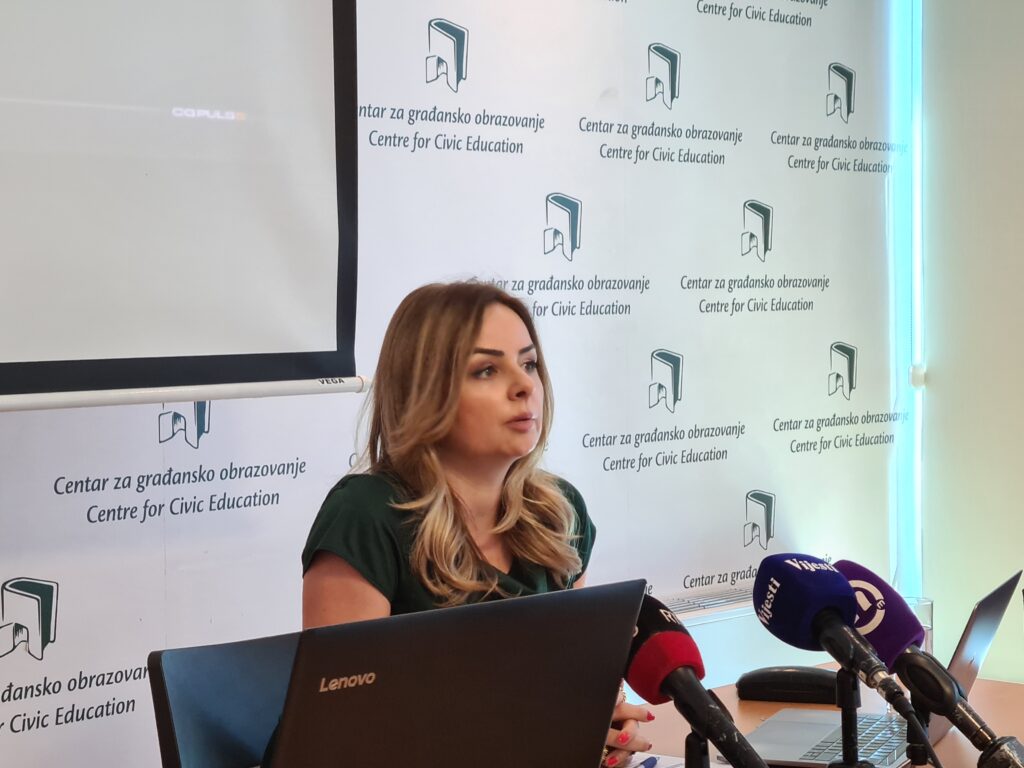 The majority considers that when forming a working group to assess the benefits or costs of joining this initiative, the Government should include the wider interested public, especially critical NGOs.

“In Montenegro, there is two-thirds opposition to Russia’s military action in Ukraine (66.1), and women, young people, those with a higher educational level, ethnically determined Montenegrins and minorities are against that war above average. Accordingly, the majority supports the Government’s policy concerning this issue, as well as the introduction of restrictive measures and sanctions against Russia by the Government, even though the citizens are in a situation where they choose a position in relation to the official politics of NATO and the EU, the interest of Montenegro and Russia are divided“, explained Uljarević.

“Given that there is accumulated dissatisfaction with the work of the judiciary, it is expected that citizens still do not believe that the judiciary and the prosecution are free from corrupt elements and that it becomes independent from politicians and other powerful people, with the most common explanation that politicians will not allow it (54.4%) while less than a fifth (16.8%) believe that this process started, and almost 30% cannot determinate”, said Uljarević in reference to the part about the judiciary.

“Contrary to various politicians who publicly expressed praise and high hopes for the new chief special prosecutor, Novović has not yet managed to build an image among the citizens of the one for whom there are no untouchables (only 7.5% think so), and the majority of them believe that he will initiate proceedings only against some, namely those who have less and less power even in their parties (49.6%), as well as that he depends on politicians (24.6%), while close to a fifth do not have a clear attitude. A similar reserve can be read in relation to the numerous arrests in the last period, as only 12% see it as a system that has started to work, while the majority support it with the hope that they await concrete results, i.e. indictments and verdicts, and there is not a small number of those who believe that maybe someone will be accused and convicted, but that the majority will get away without punishment, or that it is a performance that will not produce anything”, explained Uljarević.

The prevailing opinion is that the upcoming nominations to the Judicial Council and the Constitutional Court will be a political agreement where closeness to a certain political structure will be crucial for the selection (46.6%), while the minority belief is that it will be a selection of professionals according to the meritocratic principle, i.e. the best in that profession (23.5%).

Support for the Europe Now programme today is almost 10% lower than half a year ago, that is, after the first month of its implementation, so it is now 71%.

“We asked the respondents the same question as in February – do they know someone who lost their job because the employer could not pay the new minimum wage, that is, if they lost their job because of the effect of the Europe Now programme, to which 37% of citizens now answered positive, i.e. that they know, which is an increase of about 10% compared to February”, indicated Vuk Čađenović. 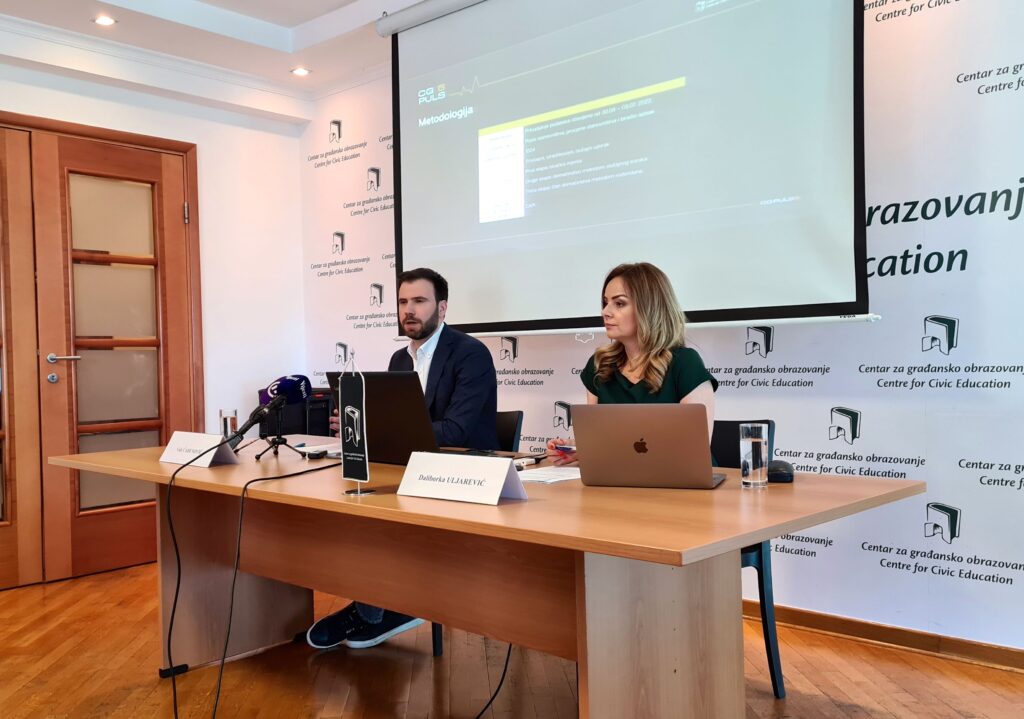 “Slightly less than half of the respondents (45.1%) believe that the minority Government of Dritan Abazović does not have the capacity to face current and expected economic and social problems, every fifth respondent believes that this Government has these capacities, and every third respondent does not have a definite opinion about this question”, he stated, underlining that the term of the research was before the turbulence of the Fundamental Agreement.

A special segment of the MNE Pulse is also related to the elections. The majority of citizens do not support the decision to postpone local elections in 11 municipalities for the fall, and in contrast, about a third supports the postponement, while a quarter does not have an opinion.

“A total of 45.8% of respondents believe that it is necessary to implement electoral reform before the next elections at the national level, every fourth respondent has the opposite position, and 28.8% have no opinion on this issue. If there is electoral reform, citizens overwhelmingly support the introduction of open lists“, he concluded.

MNE Pulse is a joint initiative of the CCE and DAMAR with the aim of using empirical data, to help those who work on the strategic democratic shaping of society, to make decisions based on reliable data and thorough analysis, keeping citizens in focus. In this manner, the quality of public debate on important issues can be improved, but also the level of responsibility of all actors can be raised.

Data collection was performed with the application of the CAPI method, from 30 June to 5 July 2022, on a three-stage stratified random sample that included 1004 citizens of Montenegro.