With the panel “Activism against the fascism of society” at which spoke Daliborka Uljarević, Executive director of the Centre for Civic Education (CCE), Aleksej Kišjuhas, sociologist and associate professor at the Faculty of Philosophy in Novi Sad, Bojana Selaković, programme director of Civic Initiatives, Aleksandar Jovanović, founder of Progressive Vojvodina Actions, and Goran Miletić, Director for Europe and MENA countries of Civil Rights Defenders and organizer of Euro Pride 2022, moderated by Balša Božović, Executive Director of the Regional Academy for Democratic Development (ADD), the Novi Sad Plenum QUO VADIS BALKAN? was opened yesterday, organized by ADD, CCE and the European Fund for the Balkans (EFB). 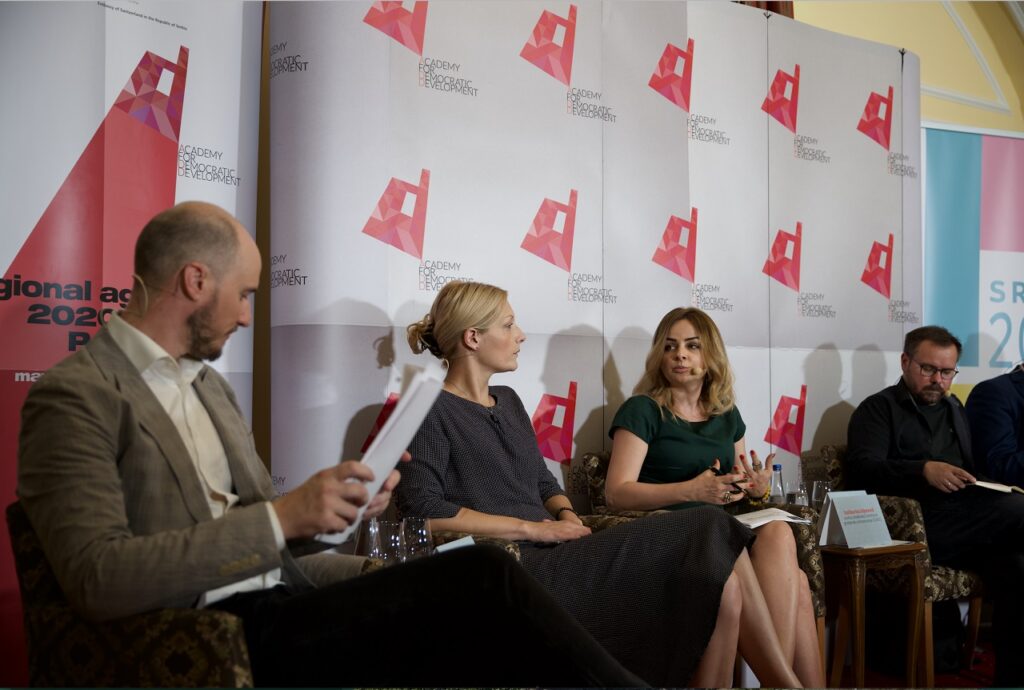 Welcoming the participants of the Plenum, Aleksandra Tomanić, director of the EFB, pointed out that “the challenges before us in the region are only increasing, and we have not even managed to get rid of the quicksand that constantly drags us back”, expressing the expectation that through constructive discussion some different answers will be illuminated in a different manner.

“I see these plenums as a regional tour of free speech, civic and civilizational values against the growing narratives that systematically, in an organized manner, perfidiously try to stifle not only critical thinking but also common sense. To what extent do we manage to preserve healthy values when making key decisions and did we perhaps make a mistake when we got into a situation where, after so much time and so many, what seemed to us, battles won, we have so many open questions? That is why it is important to gather progressive forces and to find a road map at that value level, which will give a more European image and spirit to the region, which in recent years has started not only to stagnate, but also to regress”, assessed Daliborka Uljarević. She also referred to the situation in Montenegro, including the recent incidents during the celebration of Statehood Day in Nikšić, which is also an anti-fascist holiday in Montenegro.

“The dominant responsibility for what happened in Nikšić is borne by the politicians, who in our country cultivate popular religious nationalism and professional patriotism. We have to talk about the causes, not just the consequences, so that such incidents do not happen again, and there is a high probability that they will, because they were, first of all, induced by the irresponsible opening of identity topics by politicians of a modest format”, she stated. When asked about how Montenegro came from a stable situation to such instability, she said that “it seems that we did not have real stability, but that it was somehow simulated. Genuine stability should rest on clearly established values, on strong institutions and a developed political culture. We didn’t have all that and that led us to this instability”.

“Fascist, extremist, deeply reactionary ideologies fundamentally attack the fundamental values of the French Revolution: freedom, equality and fraternity, and not only here in the Balkans, but everywhere in the world”, pointed out Aleksej Kišjuhas, pointing to the symbolism of the opening of the Novi Sad Plenum with this topic on Bastille Day.

“It is a story about the moral foundations of man and the elaboration of those values in the political sphere. It seems to me, and I’m sorry that this is the case, that Serbian society in that context is extremely conservative, clerical, right-wing,… This was nurtured and nourished in a feedback system and now we have what we have. Politicians who are populists invest themselves in the citizens and pump that kind of story that is very identarian, very conservative and that strikes the shallowest feelings. And then we have a problem to get out of this vicious circle. And if we don’t stop investing, we will become more and more right-wing and more and more conservative” Kišjuhas underlined.

Kišjuhas also answered the “million-dollar question”, i.e. where is the resistance of citizens, and assessed that there is a lack of political organizations that have “guts”.

„Citizens can be dissatisfied for a variety of reasons. However, for me, the main question is where is the articulation of that dissatisfaction, where is the political organization that would propagate that type of value and that type of politics. Then the citizens would “stick” to it, and it doesn’t matter if they are five or fifty percent. Because then you work, propagate, agitate for your ideas, enter the Parliament… There are no opposition parties, because they follow the line of least resistance and it’s easier to deceive. Thus, we get a complete crowd on the right, where the competition is who will be “more right”, Kišjuhas explained.

Bojana Selaković believes that it is much more difficult to promote European values today than before, for example, in the nineties.

“We must be aware that we have missed an entire decade. It was a decade of missed opportunities. We constantly fall into the trap of comparing the situation with the nineties, and that comparison is not possible because then things were clearer, they were black and white, and now we are in a gray zone”, Selaković stated. 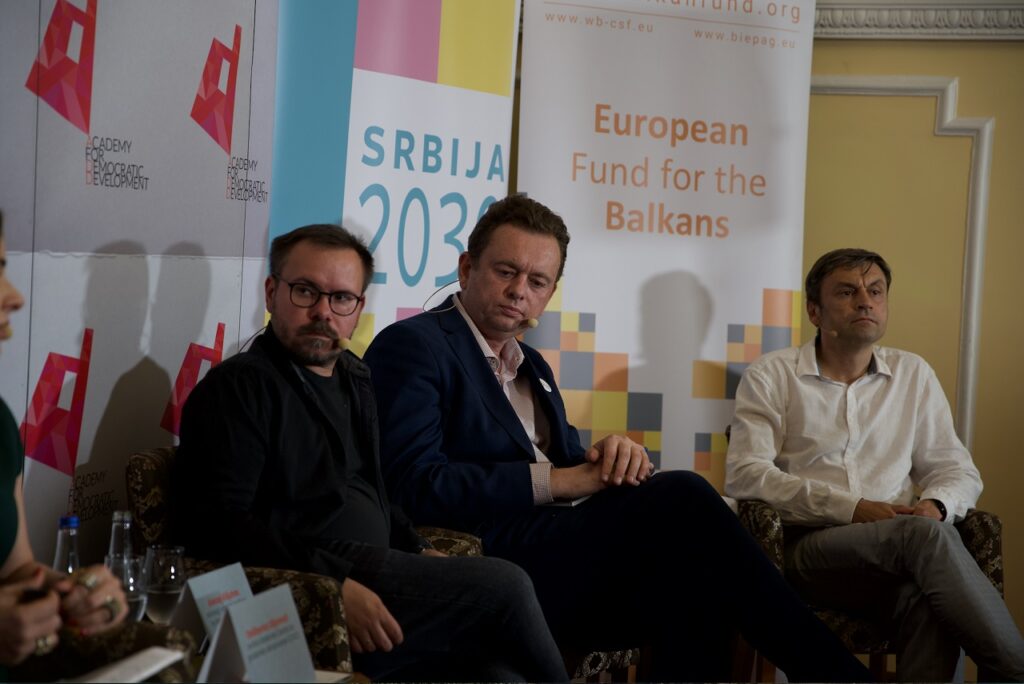 She also referred to the position of civil society. “All those attempts to build institutions to a certain extent, attempts to have civil society doing a part of the work that the state could not do at that moment, and to build trust with citizens and be a potential dam in the future, failed. Now we have a party that is not determined by values ​​and ideology, which is an interest group that literally people who share beliefs from the left to the right can fit into. That should be a very important lesson for us, that now, in some further struggle, we have to find some other methods. We cannot work as we have done so far because, not only does it not produce results, but it also exhausts people and all existing resources,” Selaković indicated.

Aleksandar Jovanović, who is also the former president of the Assembly of Novi Sad, said that “Novi Sad and Vojvodina have always been a hotbed of right-wing filth.”

Jovanović also commented on the protest that was held a few days ago at Liman in Novi Sad against the erection of a monument to all the innocent victims killed after the Second World War and underlined the importance of precision when doing such sensitive things. “In fact, the list of victims now really includes criminals who also participated in the Novi Sad raid. On the other hand, society is obliged to remember those who were innocent victims because there really was injustice and crime against them,” he warned.

Goran Miletić pointed out that Serbia has returned to the year 2009.

“We got graffiti and threats again, because of which some people were prosecuted. With us, it’s okay for Serbia to go back a hundred years, and it’s progressive if you’re in favour of the status quo, if you’re in favour of nothing changing. If you happen to be advocating for something to change for the better and for there to be changes in society for the better, you will get the label of an extremist”, Miletić pointed out and pointed out that things have changed over the last two decades.

“Something that was unimaginable, that I was told was impossible to happen in Serbia, still happened. But the percentage of those who still think that being gay is a disease is extremely high. And it did move, but it is still extremely high. In the West, when you say that 56 percent of people in Serbia still think that homosexuality is a disease, they think I made a slip when I say that”, said Miletić.

The Novi Sad Plenum is being held from 14 to 15 July 2022, at the Petrovaradin Fortress in Novi Sad.