Centre for Civic Education (CCE) pays tribute to the innocent victims of crime during Operation “Storm”, which lasted from 4 to 7 August 1995, and uses the opportunity to point out the importance and obligation of revealing the truth about the missing, prosecuting war crimes and justice for victims as a permanent duty of all governments in the region. 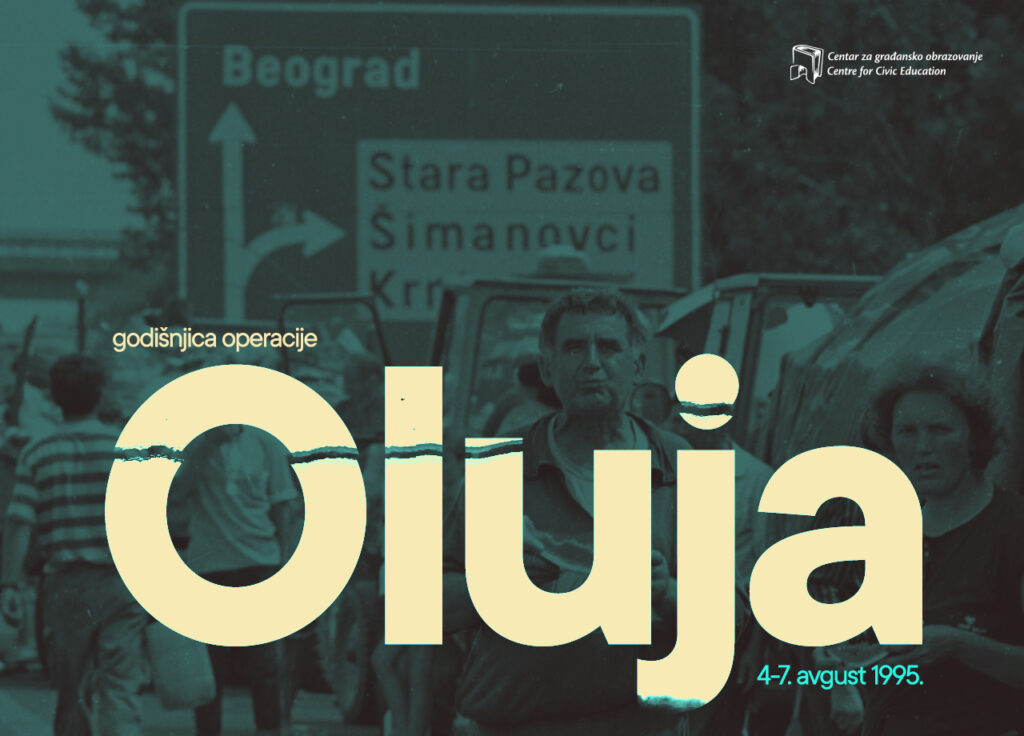 We remind that 27 years ago, with the attack on Knin, at dawn on 4 August 1995, the long-prepared exodus of Serbs from Krajina began. In the military-police operation “Storm”, conducted by the Croatian units, systematic crimes were committed against civilians of Serbian nationality and their property. For a few days, about 250,000 people were expelled, mainly to Bosnia and Herzegovina, Serbia and other countries of the former Yugoslavia, and thousands of houses and other buildings were burned. Even today, a large number of refugees are waiting to return to the areas from which they were expelled. According to data of the Croatian Helsinki Committee for Human Rights, by the end of 1995, about 400 Serbs who chose to stay in their homes were killed.

Unfortunately, even today we are witnessing new conflicts through the implementation of commemorative politics of memory, which in no way contributes to the process of reconciliation, but further deepens tensions. The lack of impunity for criminals within the “Storm” operation is an expression of the lack of political will, which is reducing the space for a self-critical review of the past and recognition of victims, regardless of religion and ethnicity.

It is worrying that the victims of the wars of the 90s, including those killed in the “Storm” operation, are not listed and among the leaders of the post-Yugoslav countries there are no politically mature and accountable ones to gather around this civilizational and historical commitment. The process of searching for missing persons has practically stopped, while the families of the missing persons continue to bear the burden of painful uncertainty.

We remind that in the previous court proceedings, before the International Criminal Tribunal for the former Yugoslavia (ICTY) in 2008 for crimes against the Serbian population in “Storm”, convicted General Ante Gotovina, Commander of the Croatian Armed Forces Split and Chief Operational Commander of Operation Storm in the southern part of Krajina, then Ivan Čermak, Commander of the Knin Corps and Mladen Markač Commander of the Special Police of the Ministry of the Interior of the Republic of Croatia. The first-instance verdict, from 2011, sentenced Gotovina and Markač to 24 and 18 years in prison for war crimes and crimes against humanity, while Čermak was acquitted, and after an appeal, the following year, Gotovina and Markač were acquitted too. This verdict caused a great deal of controversy as the ICTY Trial and Appeals Chamber – based on the same facts and the same right – have reached opposed conclusions on key issues disputed by the prosecution and the defence at trial. However, it is important to emphasize that these conclusions do not call into question the facts about what happened during and after Operation „Storm”.

The victims, survivors and families of those killed and missing during the “Storm” are invisible victims for institutions of all countries in the region. Whether they live in Croatia, Serbia or Montenegro today, they do not have any institutional material, health or psychosocial support. Effective processing of such cases requires strong institutions, political will and courageous leaders who would put an end to policies of hatred and persecution, and who, despite the political changes in the region, do not show that capacity.