In 2021, out of 243 public educational institutions, 223 directors were replaced, i.e. 158 out of 169 in primary schools, then 40 out of 47 in secondary education institutions and 25 out of 27 in other educational institutions, as indicated by the data from the Centre for Civic Education (CCE), collected during the preparation of the study within the project „Western Balkans Civil Society Empowerment for a Reformed Public Administration – WeBER 2.0’’, which is mostly financed by the European Union, and implemented in all six countries of the Western Balkans.

The possibility of the minister’s discretionary decision to select and dismiss directors of public institutions, as CCE has been pointing out for a decade, trivializes transparent procedures, the purpose of the three-member committee for the selection of candidates, the teachers’ council and other resources that are activated during the hiring and selection of directors, because those decisions are often legally disputable. This problem reached its peak during the mandate of former minister of education, science, culture and sports Vesna Bratić. 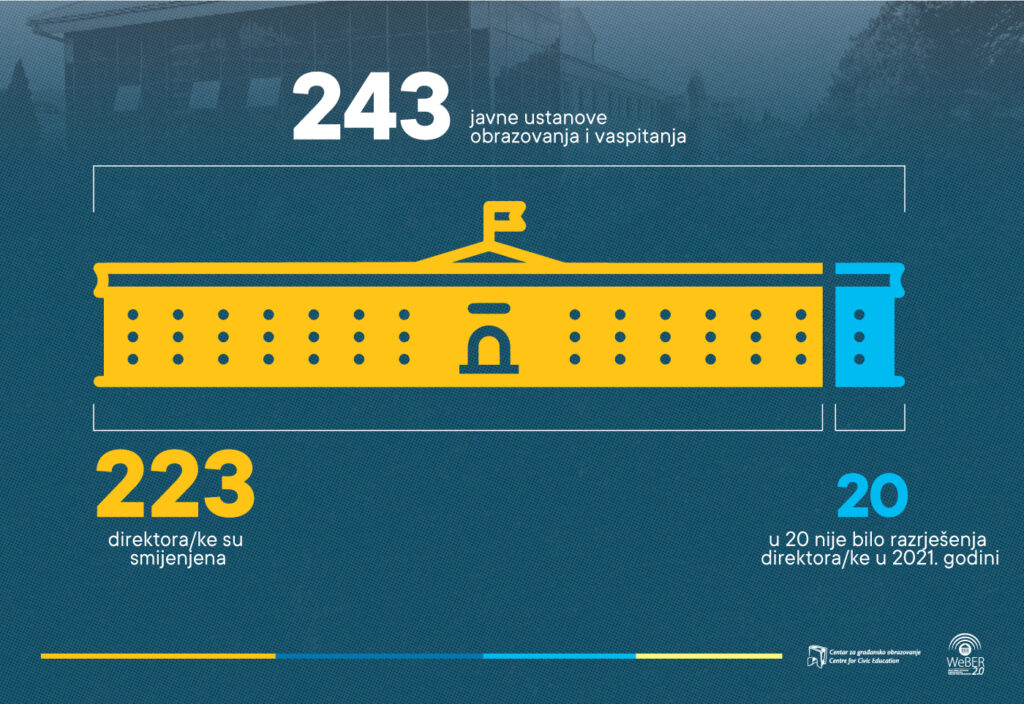 CCE conducted an analysis of the transparency of hiring procedures for directors of public education institutions in Montenegro from 1/01/2021 to 31/12/2021. For research purposes, 243 requests for free access to information were sent to institutions whose directors, in accordance with the law, are elected and dismissed by the minister of education. Data indicate that out of 243 institutions, only in 20 of them there were no dismissals of directors in 2021. Dismissals were implemented in 158 out of 169 elementary schools, in 40 out of 47 secondary education institutions, and in 25 out of 27 other public institutions, which include kindergartens, educational centers, resource centers, and pupils and students dormitories.

As a reminder, the changes in the General Education Law, from June 2021, served as a basis for the controversial dismissal of directors in over 200 public educational institutions. As this was preceded by the change of the multi-decade government in Montenegro, the intention of the then relevant minister Vesna Bratić to remove the directors of those institutions was noticeable just because they were nominated by the previous government, without any individual assessment of their work. This led to the initiation of app. 157 court proceedings by dismissed directors who believed that they were damaged, and according to the CCE data, so far over 25 first-instance court decisions are in favor of the damaged parties, with the tendency that, following the established judicial practice, all those disputes, resulted from the illegal and non-transparent dismissal process, end in favor of the dismissed directors.

From the available documentation, it can be concluded that the acting directors of most public educational institutions were appointed on 12 July 2021 and for six months, and calls were announced only in November and December 2021. Mainly two or more candidates applied for the competition, but in most cases we have the choice of acting instead of directors in full capacity, which is illegal.

Additionally, from some of the available decisions when the appointment was not made,  and which Bratić brought in 2021, contradictions and a disputed legal basis are noted. For example, Ministry delivered a decision on 12/04/2021 to a primary school by which it was determined that the director of that institution will not be selected according to the competition published on 3/02/2022 although four candidates who applied met the general requirements prescribed by law, which is also confirmed by the Ministry. However, the Ministry further states that the development programmes of the institution that they submitted do not contain certain criteria, without specifications of what is missing, but with the assessment that these are necessary for the candidates to be selected. The decision does not contain guidelines on what a precise programme is, nor is there a score list on the quality of the candidate’s programmes. On the other hand, there is also the decision of Minister Bratić for one school that none of the six candidates was good enough to be elected as the director of the institution, even though three of the six, in the specific case, met the legal requirements to be elected, and one was nominated as acting director. And that decision contains contradictory positions in the explanation, because it states that all six candidates met the general conditions of the Labor Law and the special conditions prescribed by Article 78 paragraph 2 of the General Education Law. However, the explanation does not give precise reasons why the candidate who was elected as acting one was not elected as a director, and there is no explanation of the shortcomings of any application.

The findings of the CCE indicate that public educational institutions were transparent when announcing or canceling public competitions for directors and that interested parties had enough time to apply, hence legal procedures and good practices were respected in that regard. The transparency of the process of hiring directors ends when the Ministry assumes part of the obligations under its jurisdiction.

In addition, the work of the three-member Commission for conducting interviews and considering the enclosed development programmes of the institution for the selection of the director of a public institution is not transparent, because there are no publicly available guidelines/rules on its work, information on its composition and members references, nor reports or recommendations on candidates and the decisions submitted by the ministers in 2021, as well as whether legal measures were taken to prevent conflicts of interest among the members of the commission in relation to the candidates they are examining. All this limits a valid external assessment of the (im)partiality of the work of this commission. 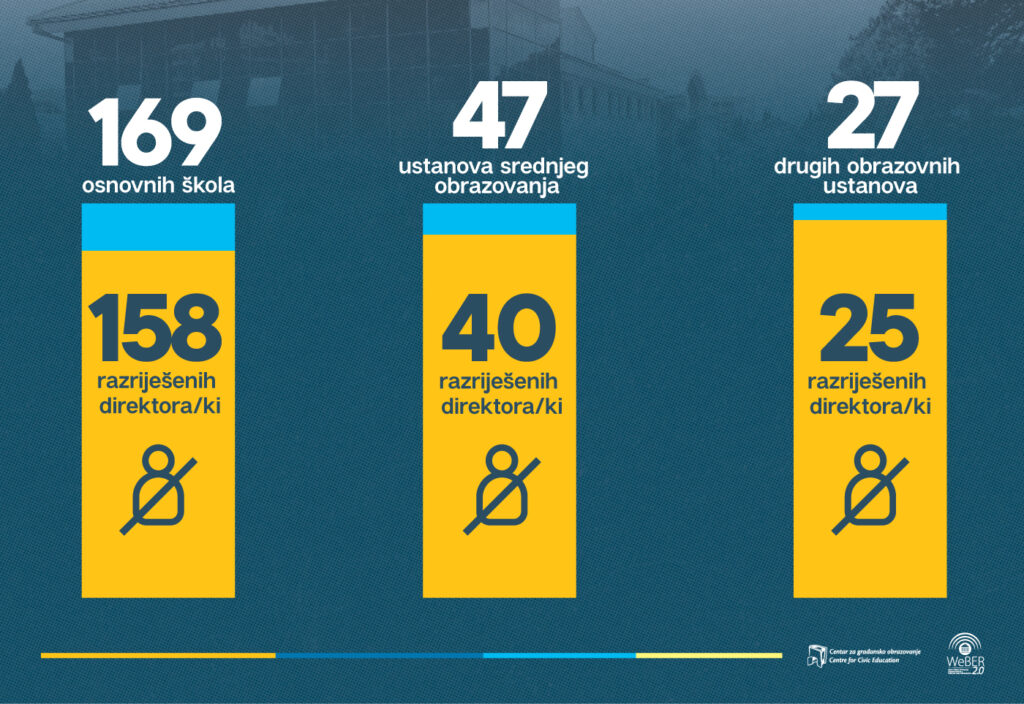 The documentation indicates that even the criterion that implies that the best-ranked candidate gets the job is not fulfilled or is only partly fulfilled. Namely, the decisions and resolutions on the nomination of managers/directors of educational institutions, the explanations of which should contain data on the registered candidates and the reasons for choosing a particular candidate, have not been made public, and those that the CCE succeeded to see indicate that the explanations given for those decisions are not substantial nor whether the appointed person is the best-ranked candidate.

And the Educational Inspection in its findings, based on the application regarding the election of acting state of the directors of part of the institutions, determined that certain appointed acting officials do not meet the legal requirements from Article 78 of the General Education Law to be directors, and yet the Minister of Education nominated them to that position in 2021. So, for example, some nominated candidates did not have the adequate educational background, i.e. 240 ECTS credits, or they had less than seven years of work experience in teaching, or they did not teach any of the compulsory or optional subjects at the institution, nor were they professional associates, as it is stipulated by the General Education Law.

CCE appeals to the Ministry of Education to make the hiring procedure for the directors of these institutions transparent from the day of the call until the decision on the selection is made, and to ensure mechanisms so the selection procedures of those directors are without selective approach, bias and discrimination. Also, the Ministry should pass an act regulating the criteria and procedures of the Commission’s work, but also initiate changes to the General Education Law in the part that the selection and dismissal of directors of public educational institutions is not the responsibility of the minister, but the school board.

Furthermore, the Ministry should be more proactive in publishing data on the website, especially regarding reports on candidates and decisions on the appointment of directors, as well as to order educational institutions to publish on their websites calls for employment, acts and data relevant to the interests of third parties. Besides, the CCE recommends that decisions on the selection of candidates for directors of public institutions made by the minister should be more substantive and include detailed reasons, along with a score list, which proves that the best candidate was selected.

The CCE also assesses that it is necessary to seriously review all the decisions of the former minister Bratić regarding the elected directors and acting directors in 2021, because they are full of numerous contradictions, and accordingly initiate the determination of the responsibility of the minister and her associates for abuse of official position. Also, more effective mechanisms should be established to determine responsibility for violations of the law due to nomination as acting directors of persons who do not meet the legal requirements for the position of head of a public educational institution, and such a system should also be established for employees of the Ministry if they verify candidacies that do not meet the basic and special legal requirements for the position of director of a public institution.