More than hald of citizens of Montenegro recognize the presence of discrimination, and Roma, women and the poor are seen as the most discriminated, while 94.1% consider, through experience or indirect belief, that there is political discrimination in Montenegro, which they primarily see in the employment area. Dissatisfaction with the work of the institutions is expressed, and as a new problem appears hate speech on the Internet, which main generators are political parties and their trolls, as well as radicalized individuals from religious communities – these are some of the key findings of the research of the public opinion about discrimination in Montenegro, presented today at the Centre for Civic Education (CCE), as part of the project “Stand up against discrimination, hate speech, misogyny and other forms of digital violence!” implemented by the CCE with the support of the Ministry of Foreign Affairs of Canada. 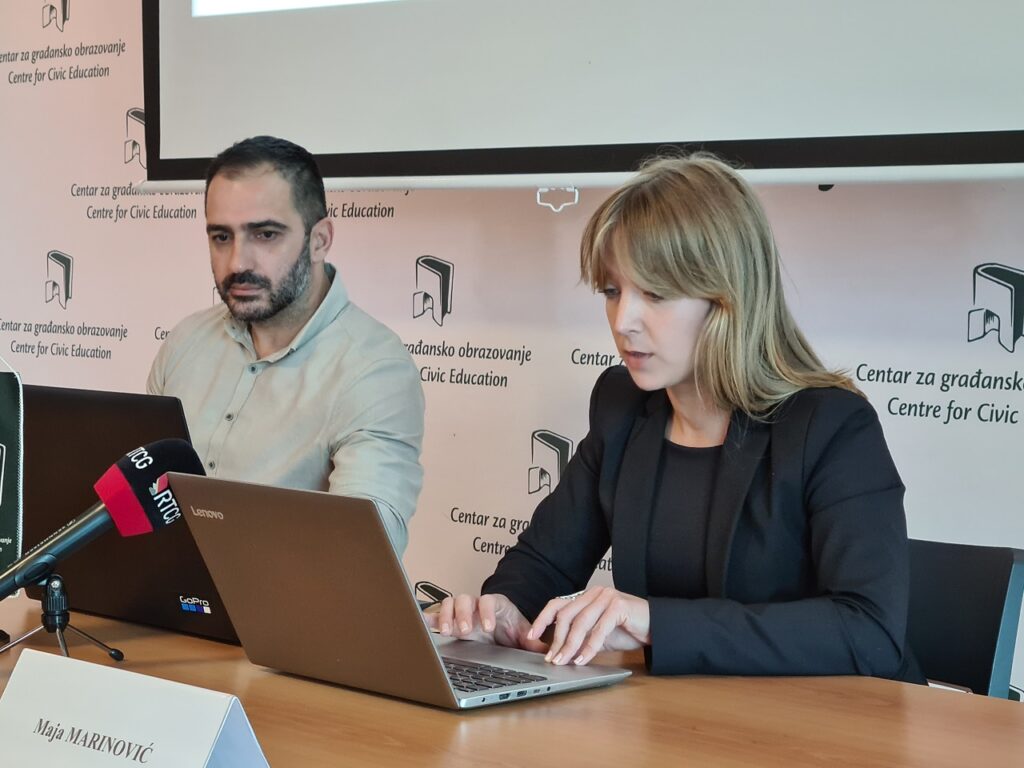 Petar Đukanović, programme director of the CCE, presenting the research findings, indicated that some of the first associations related to discrimination are rejection or ostracism from society/community, inequality of a person or group and violation/endangerment of human rights, as well as that more than three-quarters respondents believe that the denial of rights based on some personal characteristic is not justified, without exception, while about a fifth believes that it is generally not justified, with certain exceptions.

When asked to single out three groups that they consider to be the most exposed to discrimination in Montenegro, citizens singled out the Roma population, then women, and poor people. These are followed by national minorities, LGBT persons and political dissidents, the elderly and PWDs. “More than 70% of respondents believe that to a significant extent, in an unequal position compared to others, are poor people, Roma and people with disabilities, while more than 60% of citizens believe that these are also the homeless, women and political dissidents“, explained Đukanović. 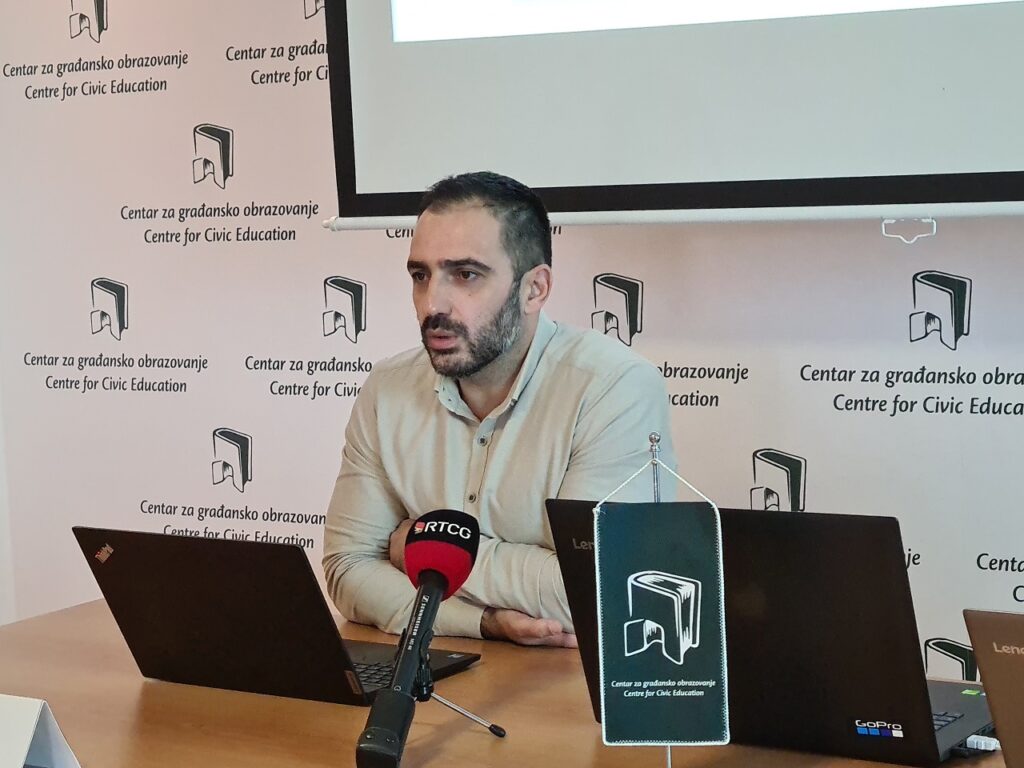 In three key areas of life – employment, education and healthcare – a significant majority of respondents believe that vulnerable groups do not have the same access as other citizens.

In the past three years, a significant majority did not experience discrimination due to some personal characteristic (72.8%), while slightly more than a fifth (22.1%) experienced that discrimination, but of that number, even 80% did not report discrimination. The small number that reported mostly addressed non-governmental organizations and authorities in the institution/organization/ company where they work. Compared to 2019, the number of citizens who directly experienced discrimination is increasing (in 2019 – 16%, and in 2022 – 22.1%).

“More than half single out the Police Directorate, followed by the courts and non-governmental organizations, as the key institution they can turn to in case they feel discriminated. In this part, there is a huge increase in turning towards Police Directorate compared to 2019, and slightly less towards the courts, while NGOs remain in the first three addresses that citizens see as important. The prevailing opinion is that NGOs and the media contribute the most to prevent discrimination, while political parties, unions and religious communities are singled out as actors whose actions do not help in the fight against discrimination“, Marinović underlined. 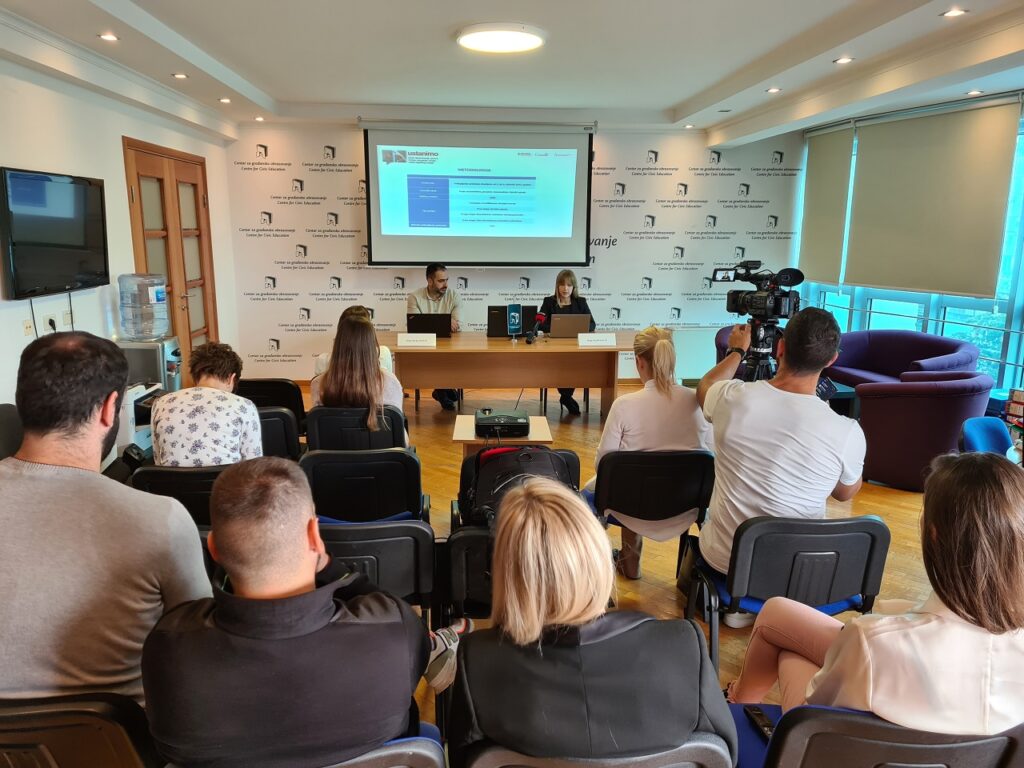 “Dissatisfaction was expressed with the work of the institutions that are responsible for preventing discrimination, hence almost half believe that the work of the institutions is insufficiently good, while 19% rate it as good and less than 15% as very good or excellent. In this part, the overall perception remains at the level of the assessment from 2019,” Đukanović pointed out.

Citizens are predominantly informed about their rights concerning the prohibition of discrimination through the media (50.8%), while 15% use the websites of competent institutions, and only one in ten respondents read the laws. However, opinions are divided on the quantity of media coverage, with the nuance prevailing in the position that the media mostly or always report about this problem. The findings indicate that competent institutions inform citizens insufficiently or not at all about the problem of discrimination and protection mechanisms.

The vast majority of respondents do not recognize themselves as targets of hate speech/comments on the Internet, while only 14% state that they have had that unpleasant experience. Those who were the target of hate speech, in 70% of cases, were the targets more than once. In half of the cases, the victims of such comments decided to ignore them, 23% reported it to the social network or portal where the case happened, and only 4% reported the hate speech to the competent state authorities. As the reason why they did not report hate speech, a third cite the lack of trust in self-regulation on portals and social networks, and more than a quarter that they have no trust in the competent authorities that would process such cases.

“Citizens see the LGBT population as the main target of hate speech, and also single out members of the Roma population, women and minority peoples, while they recognize political parties and their trolls as the main generators of hate speech on the Internet. The negative influence of groups of trolls from other countries, as well as radicalized individuals from religious communities, can also be seen, as well as that the media sometimes generate hate speech on the Internet with their way of reporting“, said Marinović.

“Although they are the minority, about 30% of respondents support stereotypical, unscientific and conservative claims related to Roma and HIV/AIDS patients, and there is also a number of those who recognize only traditional religions (Orthodoxy, Catholicism, Islam). Over 70% of citizens oppose claims that are contrary to the civil concept of the state, which deny the rights of children with disabilities, or shift the blame of victims of sexual violence onto the victim”, explained Marinović.

“When it comes to values, compared to 2019, there are certain indicators of the maturity of civic awareness, although it is clear that there is still a lot of work to be done in that direction. There is a slight decrease in the number of citizens who believe that there should be a strong leader at the head of the state, marriages between members of different nationalities are perceived as a danger, although that number is also decreasing, as is the number of those who predominantly see women through the role of mother and wife”, Marinović explained.

“The number of those who believe that entering the EU will question our culture and threaten traditional values is also falling – from 41% in 2019 to 31.8% in 2022”, she underlined.

Although citizens believe that women are up to high positions, they still cite men as better politicians. It is recognized that women engaged in public affairs are exposed to public attacks and hate speech, and that this is more common than in the case of their male colleagues. There is a divided opinion that gender equality has been achieved in our society.

The research was conducted from 2 to 9 October 2022, on a three-stage random stratified sample of 1004 adult respondents. Professional support was provided by the Damar agency.