The Montenegrin premiere of the documentary “The majority starts here” held today in Podgorica, was organized by the Centre for civic education (CCE) and the Balkan Investigative Reporting Network (BIRN). Screening of the film was followed by panel discussion led by Mirela Rebronja, programme coordinator at CCE, and, at the end, participants of the XVIII generation of Human rights school were awarded diplomas. 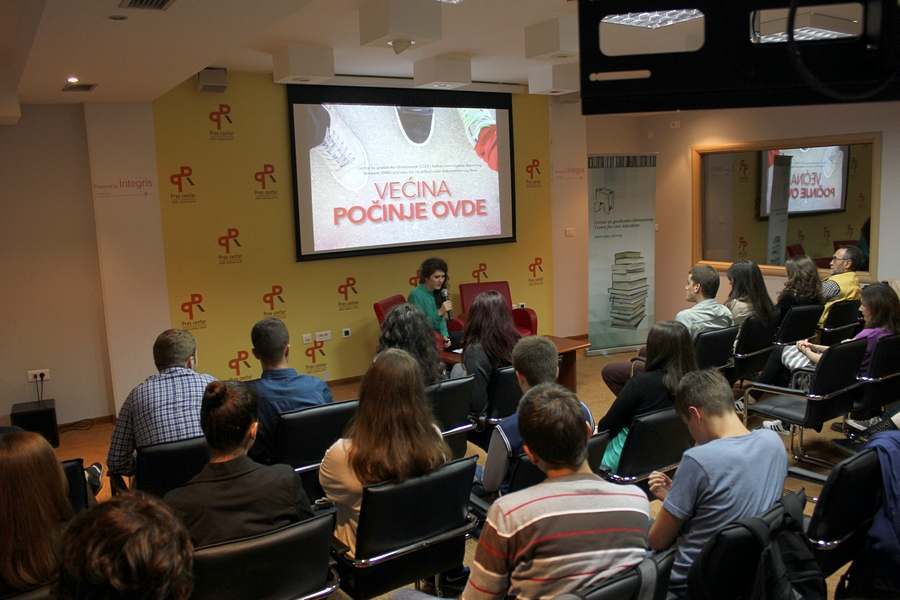 Film “The majority starts here” produced by BIRN and directed by Lode Desmet, mainly deals with issues such as how much young generation in the countries of the region know about the past and war years with which they are linked only with memories from early childhood, and whether nowadays they should talk about it, or if they assess that these topics should be put aside for the sake of the future. This documentary follows up the journey of six young people from Bosnia and Herzegovina, Croatia, Serbia, Montenegro, Macedonia and Kosovo through the countries of the former Yugoslavia. During the trip they were researching how the conflicts of the past, during which they were too young to be fully understand, influenced their present as well as the future. Along the way, face to face, they were in touch with various witnesses of the past, war veterans, refugees, staunch nationalists and activists who advocate for reconciliation.

Mirela Rebronja opened the panel discussion speaking about the importance of youth participation in the process of dealing with the past, and pointing out how encouraging is that in Montenegro, as well as other countries in the region, more and more young people want to directly be engaged in various activities that contribute to the effectiveness of this process. According to her, “it is an indication that young people are increasingly aware of the importance of illuminating the war past and re-establishing trust between nations of post Yugoslav countries, which is the only sure path to a stable future and lasting peace for themselves and generations to come.” She further stated that the film presents a valuable contribution to the discussion of the role of youth in the process of dealing with the past and that it sends the message that young people have the power to contribute to the establishment of tolerance and reconciliation in the former Yugoslavia, despite the difficult legacy of the war past.

Screening of the documentary as well as accompanying discussion was attended by over 80 representatives of NGOs, media, young people from political parties, participants of the Human rights and Democracy schools organized by the Centre for civic education, number of students and interested citizens.
Documentary “The majority starts here” is part of BIRN’s transitional justice project, which seeks to contribute to the improvement of the understanding of the importance of transitional justice in the public of Bosnia and Herzegovina, Croatia, Kosovo, Macedonia, Montenegro and Serbia. In addition to the premiere in Podgorica, organized in cooperation with the Centre for civic education (CCE), the film so far had the premieres in Belgrade, Skopje, Sarajevo, Pristina, Zagreb, Novi Sad and many other cities in the region.