Centre for Civic Education (CCE) organized today a conference “European citizenship as basis of European integration”, as the final event of the project “EU Info Bus – on the road to EU” , which the CCE implements in cooperation with Friedrich Ebert Stiftung and the NGO Natura, with the support of the Delegation of the European Union to Montenegro within its communication strategy.

The conference was opened by Daliborka ULJAREVIĆ, executive director of the CCE, who presented the results of project that lasted 11 months, had over 45 events, followed by number of publications and promotional materials as part of the comprehensive information and educational campaign in 6 municipalities in Montenegro – Cetinje, Danilovgrad, Kolašin, Mojkovac, Nikšić and Podgorica. “Our EU info-bus, in visual and essential aspect, gained the attention of the citizens in the municipalities through which it travelled. In addition to the effective message, the bus was bringing also people ready for dialogue, exchange of arguments, transfer of information, knowledge and skills – and that is postulate underlying the democratization and Europeanization of any society, including Montenegrin. I hope that we will, in the coming period, continue even more intensively to lead argument based European and inter-montenegrin dialogue “, stated Uljarević. 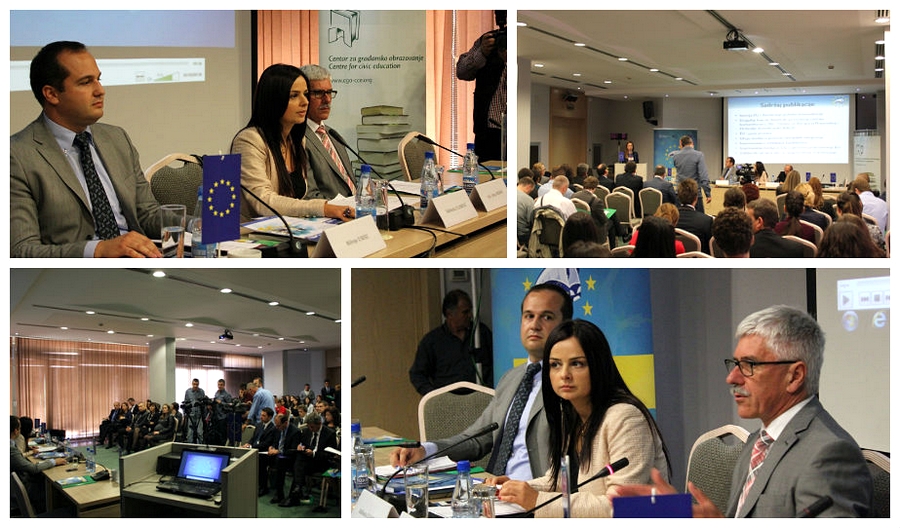 H.E. Mitja Drobnič, Head of the EU Delegation to Montenegro, addressed the topic of the conference and the concept of European citizenship, as well as the fact that 2013 was declared as the year of European citizenship asessing that as good opportunity to remind European citizens what the EU means for them and the rights they have as citizens of the European Union. “The citizens of Montenegro should also be informed about the EU, its policies, and benefits and responsibilities that membership in the Union brings. Moreover, they should be aware of the fact that the process of EU accession transform society as a whole and requires the active participation and cooperation”, underlined Drobnič with compliments to the project” EU information bus on the way to EU! “and the CCE.

Milivoje JURIŠIĆ, secretary of Negotiating Group, from the Ministry of Foreign Affairs and European Integration stressed the importance of communication of European values in Montenegro and commitment for the society that guarantees the EU system.

In the second session, “Where are the Montenegrin municipalities in the process of European integration?“ speakers were: Miomir MUGOŠA, Mayor of the Capital city of Podgorica, Aleksandar BOGDANOVIĆ, mayor of Royal Capital Cetinje, Branislav ĐURANOVIĆ, Mayor of Danilovgrad, Darko BRAJUŠKOVIĆ, Mayor of Kolašin, Slavenko BLAŽEVIĆ, President of the City Assembly in Mojkovac, Slobodanka ROGANOVIĆ from the municipality of Nikšić, who reflected to the the projects implemented with the support of EU Delegation to Montenegro, and the importance of municipalities in the process of informing citizens and delegation of representatives of local authorities in Brussels for successful withdrawal of European funding.

The conference was closed by promotion of the publication “Montenegro and EU: the role and importance of the media in the process of European integration,” . Within its framework, comparative results of the monitoring of media coverage of key moments of the integration of Montenegro into EU were presenred, with the responses from the interviews with the journalists in charge for this topic in the leading Montenegrin media, along with recommendations on further improvement of European discourse in Montenegro. Speakers were Dragan MUGOŠA, spokesman of the EU Delegation to Montenegro, who pointed out that it is necessary to work on development of journalists and familiarize them with the terminology of the European Union and Maja Vujašković ĐUREINOVIĆ, author of the publication, which concluded that the media should have easy access to relevant interlocutors to make the integration process closer to citizens.

In addition to these panelists, the conference was attended by over 80 representatives of the Ministry of Foreign Affairs and European Integration, the Parliament of Montenegro (members of the Committee for European Integration), local authorities of six municipalities where the project was implemented, then the NGOs, media, political parties, diplomats and students.

The project “EU Info Bus on the road to EU” aims to strengthen the capacity and role of local communities and civil society in Montenegro, in order to establish long-lasting and efficient contribution to the process of EU integration. More specifically, the project aims to increase the knowledge, level of understanding and support for the EU accession process of the citizens of Montenegro, through educational outreach campaign that was implemented in six municipalities in the central region of Montenegro – Podgorica, Nikšić, Danilovgrad, Cetinje, Kolašin and Mojkovac.