First on the programme, starting at 17h00, is a documentary More than honey by Oscar winning director Markus Imhoof, which represents a sort of a tribute to the bees as an indispensable element in the food chain. The manner they are portrayed in this movie contains some fascinating details about the anatomy of bees. The film is focused on the so-called occurrence of “colony collapse disorder” (CCD syndrome), and refers to the disappearance of bees worldwide, which entails the disappearance of other species. This specific phenomenon that film is addressing, was pointed out by Albert Einstein, even fifty years ago, by insisting on the symbiotic relationship that binds these pollen gatherers to mankind, predicting: “If bees were to disappear from the globe, mankind would only have four years left to live.” This film has collected numerous awards for best documentary in 2013 in Germany, Switzerland, Austria, USA, UK, etc.

At 19h00 the film Gulabi Gang will be shown, by Indian director Nishtha Jain, which brings the story of an unusual Gulabi Gang, consisting of a group of rural women. Led by the energetic and charismatic Sampat Pal, they travel long distances to fight for the rights of women and Dalits. They encounter resistance, apathy and corruption, even ridicule. Sometimes whole villages connive against them to protect the perpetrators of violence. Gulabi sisterhood is the largest women’s activist groups in the world and has more than 20 000 members, and the founder of the movement, Sampat Pal Devi, is the main protagonist of the film. The film pulls us into centre of conflicts that are occurring on daily basis in rural areas of India through a complex, disturbing, but at the same time encouraging story. The life stories of these women reflect the practical rural feminism that is trying to develop itself in a patriarchal society, in contrast to the urban feminism. This film is of particular value to us and raises everlasting questions: Is it possible to affect changes by personal example? Is it possible, in a country where there is still a division by caste and strict laws for those who dare to touch the centuries-old tradition, in a country where there are Dalits or those who are excommunicated, and in which women are disempowered, to achieve change and to seek justice? Film Gulabi Gang brings hope that not all is lost as long as there are still people who resist as beacons in the darkness of corruption, lies and apathy.

An Episode in the Life of an Iron Picker, directed by Danis Tanović, the first winner of an Academy Award from Bosnia and Herzegovina, is scheduled for 21h30. Painful true story about Nazif who is supporting his family by collecting old iron, but barely making ends meet, shows the cruel truth about the hard life and discrimination to which are still exposed members of certain social groups. His wife Senada is in critical condition because she was diagnosed with a miscarriage of third child, and since she has no health insurance the hospital requests 980 convertible marks to be paid for treatment – a whole fortune for a modest iron picker. Despite Nazif’s begging, Senada is denied the surgery and must return home. For the next 10 days, Nazif will do everything he can to try and save Senada’s life – desperately searching for more scrap metal, seeking help on a number of addresses, while his quest shows the cruelty of modern society that often we are not aware of. This is a touching story about one of the most marginalized groups in society, but also solidarity that is not extinct in our society. Nazif Mujić himself has left “in the dust” Matt Damon and Jude Law at the famous Berlin Film Festival, by winning the award for best male actor in this film.

During the first two days, four films were shown, and after the opening ceremony with the film Act of Killing>, the audience was, on the second day of the festival, presented with Albert’s Way, A Stranger and Halima’s Path. Those who have seen the first screening, attended also the speech of the director of Albert’s Way – Predrag Bambić, and discussed various topics in the field of human rights and work on this film, after the screening. 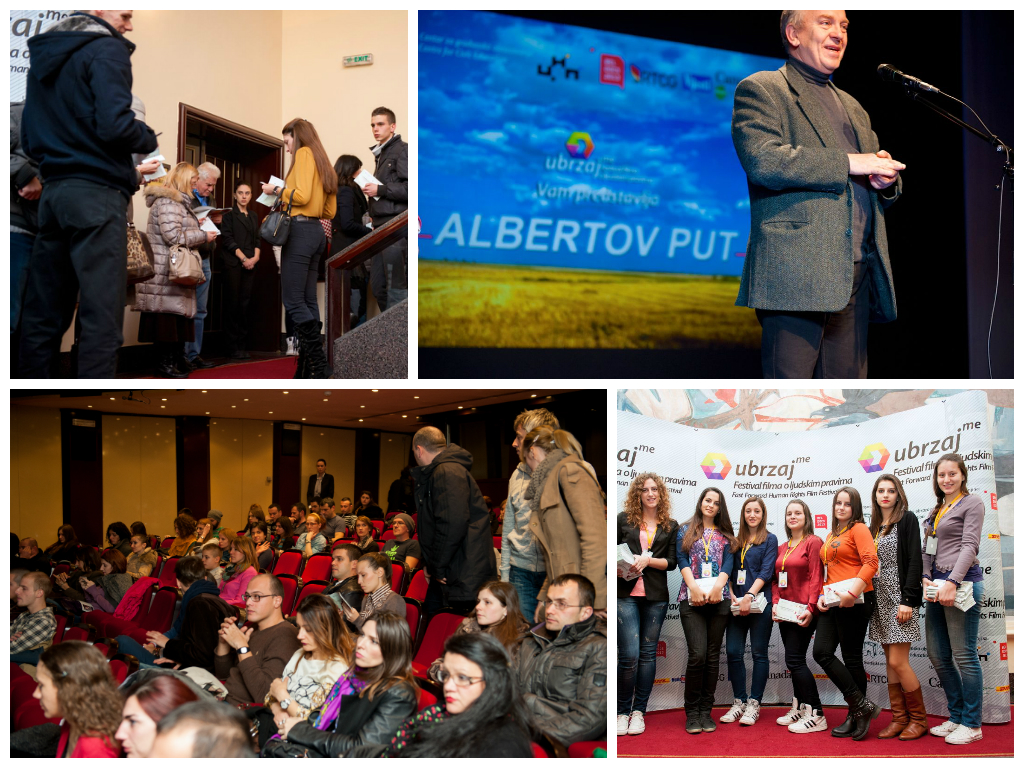 The Festival runs until 20 December, and it is organised by the Centre for Civic Education (CCE) in cooperation with the Montenegrin National Theatre and BELDOCS, with the support of the Canadian Embassy.

Dragana Koprivica, PR of the Festival