Centre for Civic Education (CCE ) has organized today in Podgorica a panel discussion on the subject of “Elections and electoral programs of 2012 – form or substance?”, and presented the revised edition with the same name of the publication that was created as a part of CCE subprogramme named Political memory , in order to document the election programs of political parties and coalitions from parliamentary elections in 2012, with the accompanying analysis of the presented policies of all stakeholders, as well as post-election achievements of the executive power.

The emphasis in the publication “Elections and electoral programs of 2012 – form or substance?” was on determining the relationship between the program positions of political subjects and their actual pragmatic political positioning and orientation. Methodologically, publication is based on the analysis of pre-election programs of political parties i.e. division of public policies in three segments: political, economic and social, as well as effects of work of the Government of Montenegro in 2013 taking into account pronounced pre-election promises during parliamentary elections. 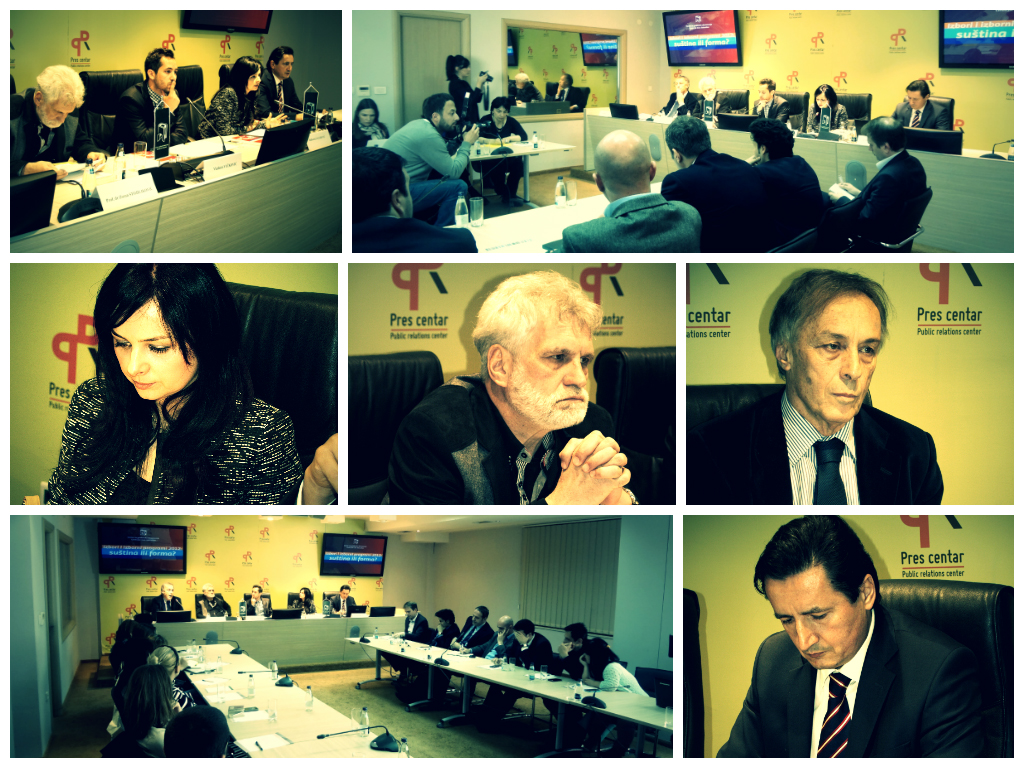 As a key issue on the current electoral process of 2012 in Montenegro, thematic framework and priority of the research was in a form of a search for: Which political problems, or suggestions for their solutions are shared by political parties? To what extent do ideological and political positions of parties differ? Are voters opting for leaders or programs? Have parliamentary political entities justified the confidence gained from citizens of Montenegro? What are effects of the work of Government in 2013 within the planned Work Program? What is manageable and sustainable government’s policy in the post-election period?

These questions have been reflected by the panelists through the prism of electoral promises and unambiguous connection with actual local elections in Montenegro. The panel was opened by Daliborka ULJAREVIC, executive director of CCE, and besides her, presenters were Prof. Dr Zoran STOJILJKOVIC, Faculty of Political Sciences in Belgrade and on behalf of the two strongest parliamentary groups – Predrag SEKULIC from caucus of the DPS and Miodrag LEKIC from caucus of the DF.

Presenting the publication “Elections and electoral programs of 2012 – form or substance?” Vladimir Vuckovic, programme associate at the Center for Civic Education (CCE), and one of the co-authors has said that “by analyzing campaigns of political parties and coalitions in Montenegro during the parliamentary elections we have concluded that the pre-election offers, i.e. election promises made by representatives of political entities to the citizens, in most cases were general, vague and ambiguous. Instead of economic and social issues, mostly dominant were general political issues, that have already been noticeable through the election slogans of political parties and coalitions. He added that “Analytically, besides the negative campaign that has decorated previous parliamentary elections in Montenegro, pre-election political entities in order to acquire more voters have paid highest attention to: identity issues, issues of employment, poverty, education, organized crime and corruption, foreign policy, decentralization and regional development, while the least of their attention was devoted to issues of human and minority rights, problems of people with disabilities, RE population, gender equality issues, sustainable development and environmental protection, culture and sport”.

Daliborka ULJAREVIĆ, while opening the panel stated that “The development of the culture of political memory, as well as political offers and political entities themselves, is progressing slowly. The fact that, in Montenegro, we still have emphasized negative and personal campaign in relation to political opponents, and even potential allies, indicates a low level of general political culture, numerous personnel and organizational deficiencies of political subjects, as well as lack of a long-term action strategies”. She also said that “the level of European integration, and support that this process has in the Montenegrin public does not correspond to the nature of political dynamics that articulate Montenegrin political scene. At the same time the key negotiation chapters are being opened and the identity positions fiercely defended, going from personal identification with the state to non-recognition of symbols, all referring to the democratic and civic principles”. She concluded that “we should have entered in the process of building of political memory in Montenegro much earlier, which would have led to faster maturing of Montenegrin political system and today would have given him a feature that it is missing at the state level – which is the changeability of government in the elections”.

In the session of Pre-election offers 2012 through prism of electoral programs and analysis of effects of work of post-election coalition Government for 2013, Prof. Dr Zoran STOJILJKOVIC said that “Projects such as this one are very important if the country wants to have a serious, responsible and competent political elite”, explaining that “It means that electoral promises are beginning to be measured as well as the gap between pre-election promises and post-election practices, which especially refers to ruling parties. There is a big role of civil society and educated citizens, as this is an area that reduces the zone of corruption and makes government more responsible for what it’s promising”. Stoiljković has assessed that “Montenegro is on its path of becoming a “normal” country – a country in which there is a certain dose of political uncertainty, and on this path it would change from so called deficient or defective democracy to liberal one.” Speaking regarding one of the consensus of all relevant political actors – the European integration, he recalled that “Montenegro is, after the accession of Croatia to the EU, the leader in European integration in the region”, while warning that “this place could be won or lost easily”. As one of the biggest issues on the political scene in Montenegro, he emphasized the lack of confidence among political actors themselves, which begins to seriously burden other processes as well.

Predrag SEKULIC from DPS has highlighted that DPS has two forms of promises: strategic and concrete promises. “The strategic objective of the DPS is entering the EU, and if you want to engage seriously in politics then you have no right to diminish the will of citizens that they are confirming throughout various researches. When we say that we will not reduce pensions and salaries, it instills confidence to citizens, which are concrete promises, added Sekulic, stressing that “DPS fulfills all its promises”.

Miodrag LEKIC from caucus of DF has pointed out that DF has not implemented its election program because it did not have power and ability to change the situation in Montenegro in such manner, but it has continually affirmed the proposed ideas and measures. Lekic reflected upon Montenegrin reality by noting that “New affairs are cluttering old affairs and this system of governing party functions quite well and shows a lack of political memory, as well as a certain form of political and historical self-consciousness”. He also said that in this regard “there is no political stability Montenegro without legal and political epilogue of the Snimak affair”. “The government and the opposition should confront in ideas so that it would be better for citizens and so that the electoral competition would be uncertain. The government should take responsibility for the condition and violation of the law”, concluded Lekic.

After the parliamentary elections in 2009 the CCE has published a publication “Contribution to the development of political memory in Montenegro – parliamentary elections 2009” as the beginning of its work in documenting political offers during the election cycles. This was followed by the publication “Elections and electoral programs of 2012: form or substance?”, as continuation of the collection of archival material, and its revised edition is available today in somewhat broader perspective that includes study of the political spectrum and positions, as well as a review of analysis of content, quality, consistency and verifiability of the electoral political offer. The objective of the panel discussion, as well as the publication, is to continue to contribute to the objectification of the Montenegrin political scene, but also an invitation to stakeholders to start dealing with elections in a different manner than before. The panel was attended by a large number of participants, among who were also MPs, representatives of NGOs, trade unions, the media, students, the diplomatic corps, etc.