Centre for Civic Education (CCE) organised a presentation of analysis “Facts and prejudice – financing of non-governmental organisations and political parties in Montenegro from public funds”.

Daliborka Uljarević, CCE Executive Director, emphasised at the beginning that the “Issue of transparency of public finances still represents a challenge, because we as a society and state system have not established clear criteria and obligations of state bodies which would guarantee order in the area of public consumption. As a consequence, we witness the emphasised selective and discretionary decision-making procedures concerning allocation of funds to non-governmental organisations, whereby the most damaged ones, are the NGOs which operate in line with the procedures. In addition, we have the profuse financing of political subjects, which is not monitored, as well as the tendentious and unfair allocation of funds to media which directly violates the relations on media market”. She further noted “Therefore, this raises the question: does the state of Montenegro need non-governmental organisations? I firmly believe it does, and that precisely the work of non-governmental organisations provides a significant contribution in limiting, or where possible, prevent political manipulations and abuses. This is not easy, because in addition to financial deprivations, we often witness smear campaigns against NGO activists, led by various political structures and related subjects. Simultaneously, we witness that genuine, active and principle engagement of part of the sector manages not only to strive, but gain the strength in spite of the intentions of those who consciously deny funds to most active non-governmental organisations and lead media and other campaigns against those NGOs.” Finally, Uljarević pointed out: “CCE findings indicate on discrepancy not just in the volume of funds, but in the level of stability of financing the political subjects. CCE’s research showed that 9.214.330.68 € were allocated from the Budget during previous three years to finance the work of non-governmental organisations. Simultaneously, political parties were financed with 23.942.836.65 € from those same sources, whereby we did not account budgetary allocations for election campaigns. Additionally, we noticed an increase in the amount of funds allocated annually for the work of political parties, and a decrease in the amount of funds allocated for NGOs, which was not accompanied with adequate explanations.” 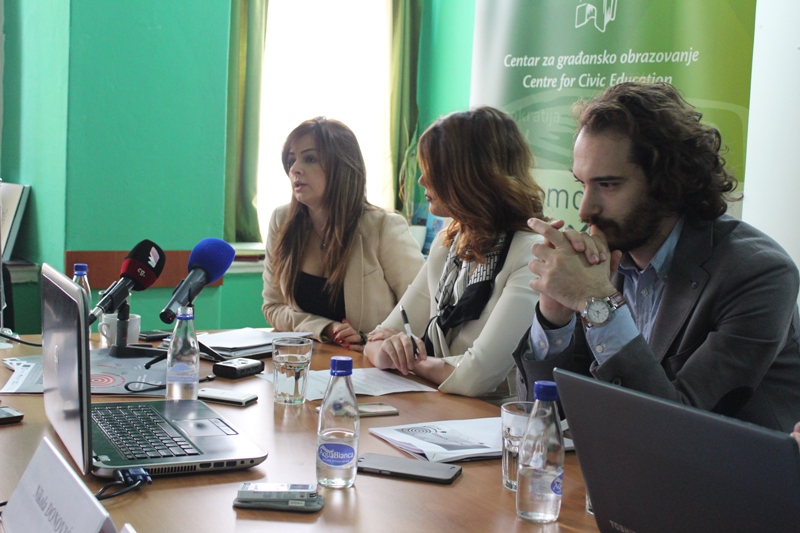 By elaborating on reasons for their support to this project, Ana Novaković, Executive Director of Centre for development of non-governmental organisations (CRNVO), emphasised that «this analysis, in its broadest context, provides an answer regarding the cost of democracy in Montenegro – through political parties as actors of parliamentary democracy, and NGOs as actors of participative democracy, or how does the Government dispose with funds for that purpose». She assessed that «when it comes to non-governmental organisations, such financing of projects of NGOs from state budget has two consequences: erosion of non-governmental sector in Montenegro and inappropriate relation of Government towards taxpayers’ funds. She further clarified that: “First consequence is a result of severe violations of laws which regulate the area of financing NGO projects. Second problem lies in the manner of allocation of funds. Allocations are performed based on the principle “a bit for everyone”, projects are supported in the amounts which stultify the possibility of realisation of quality ideas, and in the majority of cases these projects are not related to public policies. I believe that citizens would not approve such approach and that this illustrates the inappropriate relation of Government toward their money”. She also noted that in the financing of political parties «it is time for citizens to get an insight into the amounts allocated to finance political parties, as well as the level of transparency and responsibility in the implementation of these resources».

Nikola Djonović, CCE Programme Coordinator and one of the authors of analysis, tackled one of the typical prejudice when it comes to NGOs: «Montenegro has 3,808 NGOs, and by comparison, Serbia has 23,394, Croatia 52,272, Austria has more than 120,000 NGOs and 3, 400 foundations, while Germany has 621, 000 NGOs and foundations, almost more than Montenegro has citizens, and Britain nearly 775, 000 NGOs and foundations». He reflected on key laws which regulate the work and financing of NGOs, by indicating on their inconsistency. In part of the institutional framework of financing the NGOs, he focused on the work of Commission for Allocation of Part of Revenue from Games of Chance by pointing out that «Commission disposes with largest fund through which 6.408.792.14 EUR were allocated during previous three years to non-governmental organisations to finance the total of 1,354 projects, whereby the average amount of funds allocated amounted 4,733.22 EUR per project». In addition, he told that “NGOs often indicated on tendency of unlawful deprivation of funds to NGOs in line with the Law on Games of Chance, which was confirmed by State Audit Institution in its Report on the audit of financing the NGOs, whereby it noted discrepancies between the amount envisaged for the allocation pursuant to law, and planned and allocated funds”. In this manner, Djonović added, “NGOs in Montenegro were damaged for 3.992.129.07 EUR only during the period 2013 – 2015”. Furthermore, Djonović pointed out that Commission does not respect the legal deadlines for the allocation of funds. By reflecting on Fund for the Protection and Exercising of Minority Rights, Djonović told that NGOs received 50% – 1.121.590.00 € within the allocated amount, through this Fund from 2013 – 2015, and underlined that the remaining amount was allocated to individuals, national councils and others, as well as that the work of that Fund is characterised by many controversies. “As stipulated by the law, budgets of local self-governments finance the projects of NGOs that are of interest for local population. In this part, the practice of opaque and irresponsible management of public finances continues, based on the direct decision of president of municipality/mayor”, Djonović warned. He also reminded that Commission for Allocation of funds to NGOs of Government of Montenegro has not been formed even four year after the Law on NGOs came into force, thus leaving the NGOs deprived of the funds planned under this budgetary line, as well as of mechanism which should secure more transparent and efficient financing of NGOs. Finally, Djonović expressed his concern due to the practice of discretionary decision-making on the support to non-governmental organisations. Most recent instances of such practice drew the attention of public during 2014 and 2015 regarding the establishment of so called «Civic House», or the partnership of Government of Montenegro, three NGOs – Civic Alliance (GA), Centre for Democratic Transition (CDT) and Fund for Active Citizenship (fAKT), municipality of Podgorica and Rockefeller Brothers Fund, by pointing out that the important aspects of signed Memorandum between these subjects still remain unknown.

Boris Marić, CCE Senior Legal Advisor and one of the authors of analysis, noted that Montenegro has 60 political parties, out of which 47 are active, and that the percentage of allocation from the Budget of Montenegro for political parties is higher compared to region or EU member states. «In previous three years, 11.768.621.20 € were allocated to political parties in Montenegro on national level, and the average annual cost of one MP amounted 64.556, 04 €». He also reflected on allocations by municipalities, underlining their unevenness and often poor planning compared to the implementation in some of the municipalities. «For instance, you have the municipality of Cetinje which envisages 50 000 € for political parties each year, and sometimes ends up allocating less than 3 000 €, or the municipality of Budva which envisaged 150 000 € on annual level, and ended up allocating less than 6 000 € one year, or 35 000 € the other. An example of well executed planning and implementation of budget in this part are, for example, municipality of Andrijevica or Kotor». Marić pointed out that within the funds which CCE analysed in the part of the financing of political parties, funds allocated for the financing of election campaigns were not included, which “«amount 1. 929.731,85 € for regular parliamentary elections in 2016“. Finally, he concluded by stating that «Though they present a rather large allocation from the budget, funds for the work of political parties have its justification, because the development of parliamentary democracy implies an efficient and professional work of political parties and representative bodies on local and state level, while the manner and effect of expenditure of those funds is a separate issue”.

Željka Ćetković, CCE Programme Associate and one of the authors of study, concluded the discussion by focusing on conclusions and recommendations of analysis, which is available at the CCE site: http://media.cgo-cce.org/2016/03/cgo-cce-facts-and-prejudices.pdf

Publication, which came out as a result of the analysis, is part of the project “For better public financing for NGOs!”, aimed to contribute to reform of system of financing the NGOs from public funds in Montenegro and financial sustainability of NGOs. The project was financed by the European Union and Balkan Trust for Democracy, within the BCSDN “IPA Balkan CS Acquis: Strengthening the Advocacy and Monitoring Potential and Capacities of CSOs” project. Representative of BCSDN network in Montenegro is CRNVO.

The event gathered 40 representatives of civic sector, political parties and state institutions which invested efforts through constructive discussion to provide contribution to the creation of better ambient for the work of NGOs in Montenegro.