Centre for Civic Education (CCE) today presented a research on public opinion regarding the perception of citizens on discrimination and homophobia  within its project Different but equal, supported by the Embassy of Canada. Field part of research was done by agency Ipsos Strategic Marketing.

By discussing on project, within which the research was done, Svetlana Pešić, CCE programme associate, pointed out that “Fight against discrimination and homophobia is a complex process which implies the understanding of causes, influences and manners in which these phenomena function in order to develop comprehensive strategies and activities to fight them.” She clarified that the “objective of research was to determine the perception of citizens on discrimination in Montenegrin society, it prevalence, most vulnerable groups, with an emphasis on LGBT rights, and certain issues which provide the assessment on the extent of authoritarian or democratic awareness of Montenegrin society”.

“We believe that this research can serve as an evaluation of influence on the existing policies, performance of institutions and work of civil society in this area. Simultaneously, the results of research can provide certain guidelines as in how to harmonise policies of fight against discrimination and protection of human rights and make them more effective. After all, one of the prerequisites of social integration and inclusiveness of marginalised and vulnerable groups are the opinions of citizens and their will to accept the approach of equal opportunities for everyone, while on the other hand, prejudice and stereotypes, or their severity, can act as a restricting factor for full inclusiveness of society. Hence, it was important for us to illustrate the standpoints of citizens in relation to further perspective of improvement of quality of life for LGBT people”, stated Pešić. 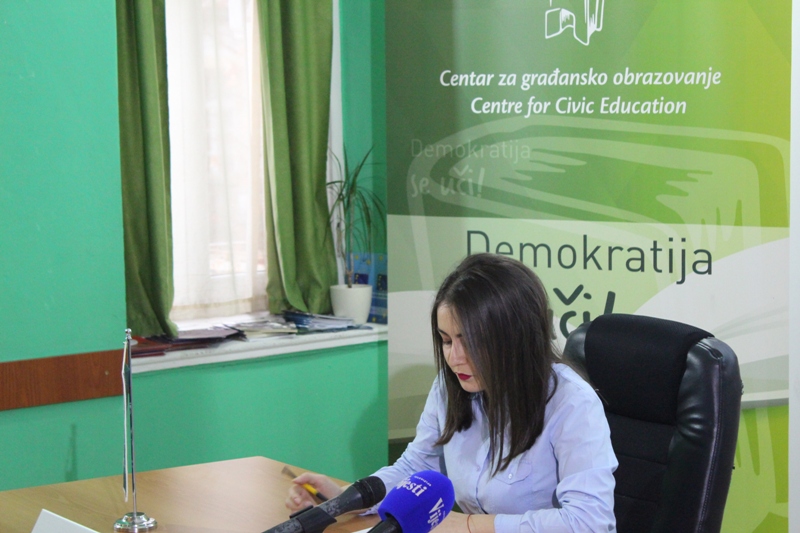 Petar Đukanović, CCE Coordinator of Human rights programme, presented the results of research by stating that researchers started from the first associations of citizens on discrimination. “We firstly asked: What is discrimination? Among those spontaneous answers, highest percentage of citizens (slightly less than a half) defined discrimination as deprivation of human rights, disregard of diversity and rejection or exclusion from the community. Given that the answers were spontaneous, hence without any previously provided definition of discrimination, we can assume that our citizens recognise discrimination as a phenomena to the great extent. Still, it is important to underline that 12% of citizens still does not know what discrimination is, which is concerning since those citizens will most likely be a victim of discrimination and they will not be able to identify it”. 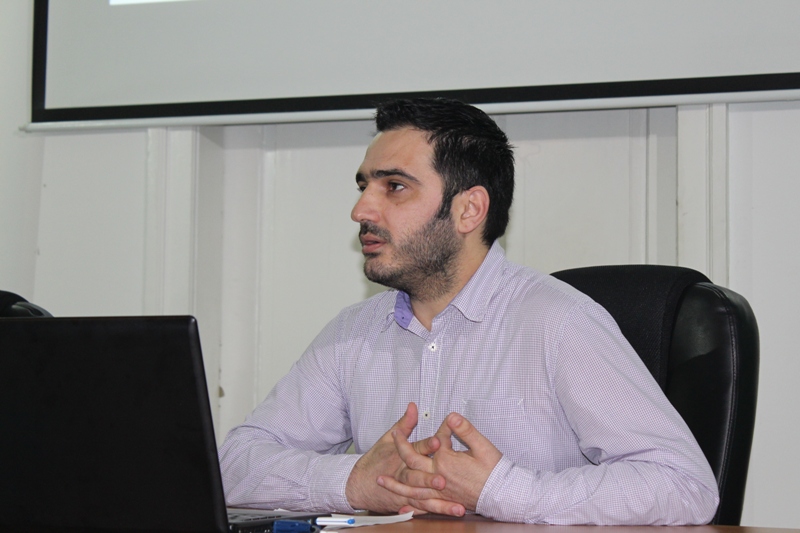 Đukanović further elaborated on the results of research:

“Vast majority of our citizens, 76% of them, or ¾ states that deprivation of rights solely based on some personal property is not justified. Nonetheless, 20% of them believe that it is mostly unjustified, but that there are also situations when it is ok. Finally, 2% believes that it is justified in the majority of cases, and such opinion is most present with respondents who live in central part of the state.

Elderly people, people with lower level of education, as well as the citizens from northern part of the state are the ones who mostly believe that there is no discrimination against persons of different sexual orientation.

4/5 of citizens believe that state has to demonstrate that it guarantees constitutional human rights to all minorities, regardless of whether they are fond of one or not, because if those rights are denied to some minority group, tomorrow those same rights could be denied to anyone of us. 14% of respondents disagree with this statement.

Most common associations of respondents regarding the LGBT are particularly negative, most of them referring to disease, disgust, shame, various forms of disorder, perversion and similar. Very few respondents have positive opinion and see LGBT people as equal and hold nothing against them.

Every other citizen agrees with statement that people with different sexual orientation are so harmful that we should invest efforts and use all forces to fight this occurrence (this opinion is most advocated by elderly people, people with lower level of education and people from rural areas), while 2/5 of citizens of respondents believe that stories about people with different sexual orientation are a bit out of proportion, because elsewhere in the civilised world this has been accepted as a regular occurrence which has been present ever since.

Only 1/5 of citizens claim that it would be very useful if experts were to use public forums and TV shows as platforms to discuss on homosexuality from a scientific point of view. Even 45% is against it, and hold a prejudice so strong that they refuse to hear any scientific fact. Some third of citizens thinks that this would be useful in order to better understand different sexual orientations and fight them even better!

When it comes to protection of human rights with different sexual orientation, respondents’ opinions are divided: ¼ of respondents believes that state needs to protect the rights of sexual minorities as well as the rights of any other minority, 1/3 believe that homosexuals are not sick, but that this occurrence is harmful for the society and that state needs to suppress it rather than incite it by providing protection, while 2/5 of citizens thinks that homosexuals are sick persons and that state needs to provide a treatment for them like for any other sick person.

LGBT people are least accepted as members of families, while the reduction of level of intimacy reduces the level of non-acceptance of LGBT people, thus the intolerance is lowest towards potential neighbour LGBT person.

In the hypothetical case of urgent operation of a respondent or some close family relative, between a professional surgeon who is a homosexual, and average surgeon, who is a heterosexual and family man, the majority of respondents would opt for more competent homosexual surgeon – 59%, which is encouraging, because it shows that LGBT people are not necessarily regarded based on their sexual orientation.

Opinions are divided when asked: Would you mind if your child was to attend lectures on homosexuality from scientific point of view? Namely, 45% of citizens states that they would not mind, while on the other hand, nearly the same percentage stated that they would in fact mind. What is interesting is that this would also bother a significant number of highly-educated parents and from the south of the state.

When it comes to right of public display of sexuality, respondents opinions are extremely negative whereby 6 out of 10 believe that they do not have the right to kiss and hold hands in public place, while every third citizens out of ten thinks otherwise. High level of disapproval by those with higher-level of education is concerning.

Respondents are also divided in terms of the continuation of support to political parties which advocate the rights of homosexuals in their campaigns, thus 41% would stop voting for such party.

Nearly ¾ of respondents believe that homosexuals are not endangered in Montenegro and that they do not require assistance in order to exercise their rights. More radical methods of behaviour in relation to LGBT persons are not largely accepted among the respondents: nearly 1/5 believes that verbal violence is justified, significantly less people justify physical violence, and the same number believes that homosexuality is not present in Montenegro. It is concerning that 14% of citizens in Montenegro are still prepared to justify physical violence against homosexuals.

Almost 2/3 of citizens believes that the occurrence of different sexual orientation is less present compared to Western European states and 70% is because of the education, family and moral values, fostered by Montenegrin society. Nonetheless, 25% of respondents believe that perception is such because LGBT persons hide their true identity due to discrimination and intolerance.

If people were to find out that some of their favourite public figures from sport or entertainment are homosexual, majority would continue to watch/listen or root for them, but there is also a great tendency of decline of affection for the person. However, if they were to find out that their favourite politician is homosexual, 60% would lose their affection, 1/3 claims that nothing would change, and 46% claims that, most likely, they would no longer vote that political party which would include LGBT rights in their campaigns. Very few citizens stated that they know someone famous of different sexual orientation in Montenegro – only 8%.

Respondents are not that familiar with the initiative on the adoption of law on same-sex union, every fourth citizen has heard of this initiative, while only 1/5 has a positive opinion on this matter.

When it comes to opinions related to Pride, majority of respondents believe that it serves to parading and expression of sexual orientation, while fewer number of people recognises it as a form of protest against discrimination. 60% of respondents is against Pride, while 1/3 claims that they are ok with it. Elderly and people with lower level of education are most numerous opponents of Pride.

Precisely one half of adult citizens believes that civic society organisations dealing with the protection of human rights will always be necessary to advocate the rights of those who are not able to do so themselves, while more than a third disagrees with this statement, claiming that Montenegro is a democratic state in which state institutions deal with human rights without the need of involving other institutions.

When looking at a bigger picture of state of awareness of citizens, it is clear that Montenegrin society is still firmly authoritarian and traditionalist, with a significant presence of nationalism. Namely, 80% of citizens would like to have a strong and steadfast leader who they could follow, while 72% of respondents believes that women’s most important role in society is to be a good wife and mother.

Opinions are divided regarding the influence of EU accession on traditional values and national culture, while the majority disagrees with the statement that mixed marriages could threaten national integrity.