Miloš Knežević, Coordinator of the Centre for Civic Education Youth group of (CCE YG), was a guest of Pupils’ Parliament today at High School “25 May” in Tuzi, where he held a workshop on peer violence. The workshop objective was to inform young pupils on the nature of this form of violence, its causes and consequences, how to identify it and take an active stand against it through peer education, mechanisms of protection and reporting of specific cases.

Workshop was attended by 30 pupils who had the opportunity to hear more about cyber bullying and hate speech as the most frequent forms of peer violence which mainly takes place via social networks and mobile phones, as well as about the possibility of protection through the safe internet use. Special attention was on the form of peer violence based on ethnic and religious grounds, given that Tuzi is a multi-ethnic and multi-confessional community. Thus, there was some notion of nationalism, ethnic prejudice and stereotypes, which present the obstacle for mutual understanding among young people, with emphasis on appreciation of difference and strengthening the values of tolerance. 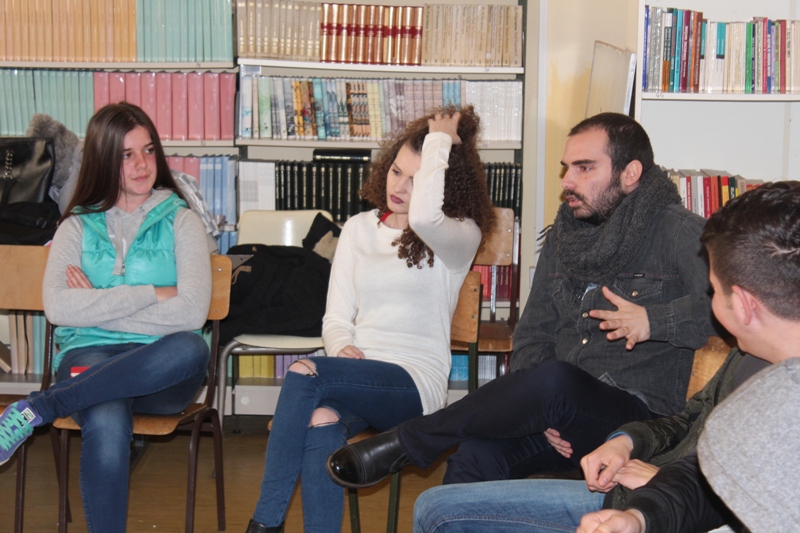 UNICEF’s research from 2013 indicated that every third citizen of Montenegro knows some child – victim of violence in school. Majority of citizens consider that there are certain groups of children who are more susceptible to peer violence, and those are mostly members of discriminated groups: poor people, persons with disabilities, ethnic minorities, and physically weaker children.

In spite of the numerous programmes that are being formally conducted in order to prevent peer violence, the results are still unsatisfying. Obviously, it is necessary to engage all factors in the education system, as well as to improve the cooperation with parents and open the school for greater and more meaningful participation of students. The school plays both an important, and difficult role in the attempt to use media and mass culture as the alternative to growing popularity of violence, but also as a mean to direct youth to principles of dialogue, tolerance and acceptance of diversity.

Workshop on peer violence was organised upon the initiative of Damir Suljević, president of Pupils’ parliament of High School “25 May”, and former participant of Human Rights School, organised by the CCE, with the support of administration of school from Tuzi. At the end of the workshop, pupils were given the CCE’s informative and educational material.

Through its educational programmes, CCE deals with the subject of peer violence aiming to encourage young people to reflect on this issue and to take an active approach in the protection of their rights, but also of rights of those who are not able to do so themselves. Pupils’ initiative, for which we believe that it is an attempt to incite youth activism through our programmes of education, as well as the support of high school from Tuzi to make room for cooperation, are encouraging and we will gladly respond to any similar call in the future.