Mina Kalezić, programme assistant at the CCE, explained that the overall objective of project Young people in Montenegro – Social Ornament or Social Capital?, within which the research was conducted, is contribution to strengthening of young people and their active participation in the promotion of values of European Union and democratic reforms. “Specific objective of project is to raise the awareness of public and stakeholders on issues related to young people and their perspectives, as well as to foster the capacities of young people for active participation in social and political processes”, Kalezić stated. 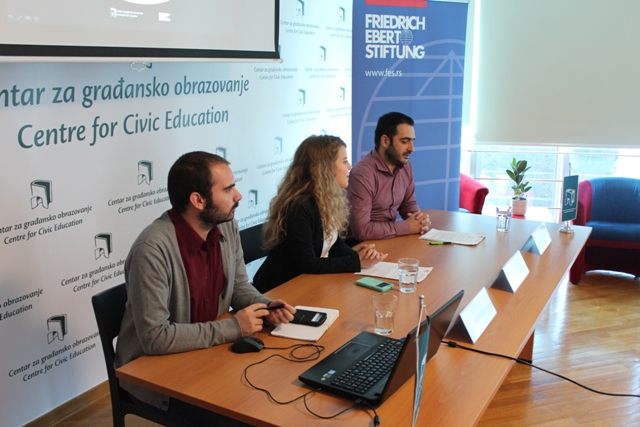 Petar Đukanović, programme coordinator at the CCE, reminded that CCE has been developing strategies of civic education since its establishment, in order to contribute to democratisation of Montenegrin society. “In this respect, young people are one of the most important target groups of our activities, which are aimed to enhance skills and knowledge in the area of social and political activism”, Đukanović emphasised. He further assessed: “Nowadays, young people represent one of the most vulnerable social groups, which is practically excluded from decision-making processes. On the other hand, it is a population which possesses great potential for social change and development”. He particularly reflected on two findings, marking them as striking from the angle of CCE’s mission. “We see the case of high level of ignorance by young people concening issues of social and political activism, as well as the negligible distance of young people in relation to members of vulnerable and marginalised groups. These findings also indicate the low level of political culture, which surrounds us, and the outcome of same, in other words, the space which requires an intervention. Hence, these will be significant for our analysis and the accordingly innovations of certain informal education programmws that we offer”, he told. Đukanović warned: “The perspective of Montenegrin society depends on how we perceive the young population. It would appear that there are two key perspectives – one, which sees young people as a problem which cannot be solved, and other which sees them as resource. Unfortunately, first one is dominantly our reality, and the other should become our goal. Numerous researches and statistics show that countries which opted for second option today have the lowest rate of unemployment, and that they achieved highest political participation of young people.” He expressed hope that the finding of this research will be useful for institutions dealing with young people.

Young people in Montenegro think that most important is to have friends, obtain quality education and to be loyal (to partner, friends, employer). Taking up the responsibility is highly valued, as well as getting married and starting a family, as well as developing a career, and slightly less important, according to young people, is doing sports, independence and healthy alimentation. Civic actions and initiatives and political activity are low on the ladder of important things among young people in Montenegro, based on which we can assume that young people are not attracted by these areas. Fortune and wearing branded wardrobe is mostly regarded as unimportant. Generally, one could say that young people have a healthy and socially valuable perspective on the hierarchy of values. However, it should be mentioned that young people in Montenegro are not full of idealism or utopianism. Hence, “to be wealthy” is not atop of the ladder of their orientation of values, but young people are certainly not the utopists who deny their, and general, human need to be financially secured and care-free.

Unemployed young people value somewhat more altruism in other people compared to the average. Based on the provided answers, we get the impression that young people in Montenegro are not, as elderly often call them, the „unsatisfied generation“. On the contrary, in the majority of aspects of their family, social, personal (intimate), even to some extent economic sphere of life, they are the generation of satisfied people. Still, the number of young people who are slightly or completely unsatisfied is relatively small. Even in the domain of their own economic status, slightly less than 1/3 of young people are satisfied to certain extent, and more than 40% of them are quite satisfied, which was quite an unexpected result.

Young people in Montenegro are most distant in relation to homosexual persons, migrants and HIV positive persons, while they are most tolerant (least distant) in relation to students. Distance in relation to persons of different sexual orientation may have not been something that we expected during the research of opinions of young people in Montenegro, but on the other hand, it was quite expected, considering that some of the researches of more recent date on the basis of adult population show that it is still one of the most noticeable distances and social stigmas in Montenegrin society.

On the other hand, they claim that they have very rarely (sometimes never) experienced any form of personal discrimination by some other person. The most prevalent form of discrimination which young people in Montenegro face is the discrimination based on their political beliefs, though the presence of such experiences is on a very low level.

Half of the young people in Montenegro, who were the respondents, wants to leave Montenegro, while half of them doesn’t. Still, the desire to leave is somewhat stronger with younger people who are in the process of education, as well as with young male persons. Key motives for leaving Montenegro young people find in the expectation of better life standard and more employment opportunities abroad. Hence: more quality employment, education and life conditions present the key motives behind the potential departure of young people from Montenegro. It seems that young people who wish to leave Montenegro have a clear idea as to why they want to do it, since only 1% of them stated that they would move away from Montenegro „only to get away“.

The most desired working engagement is within state administration, where more than a half of young people would like to work, and slightly less than a quarter states that it would like to work in private sector. Also, „favourite professional” destinations are international organisations, while the NGO sector is not that attractive to young people in Montenegro. As most important factors for finding a job young people underline personal connections and links, expertise and level of education. Political ties are on fourth place with slightly more than 10%.

Young people are mainly pessimistic in terms of their own influence on the work of institutions on local, as well as on national level. Still, the concept of power of one’s own voice on local level compared to national is somewhat more positive.

Institutions to which young people trust to the great extent are church, non-governmental organisations, army, police and judiciary. To some lesser extent, with more negative odium among young people, they trust to prosecution, media and trade unions. Institutions with significantly lower level of trust and considerably greater level of negative odium are: local authorities, Government of Montenegro, Parliament of Montenegro and political parties in Montenegro.

Activities related to accession of Montenegro to EU is kind of second-grade interest for young people, and they are also not particularly interested in issues of military security and force, spiritual rejuvenation of nation and development of private entrepreneurship either. As far as they are concerned, the most concerning topic is unemployment, which is quite understandable from their point of view. Apart from that, young people assess that growth of poverty, insecurity of employment, increase of cancerous diseases in the population, then criminal activities and pollution of environment, are very important and burning topics for Montenegrin society. Not less important are the inefficient fight against corruption, drug addiction, street crime and poor implementation of existing legal norms and regulations.

When it comes to one of the key issues of strategic development of Montenegro, which is the European integration, the majority, but not more than a half, is affirmative of accession of Montenegro to European Union.

Regarding the representation of interests of young people in political life of Montenegro, young people are once again divided. Slightly more than 1/3 of young people believe that they are not represented in the political life, or to some extent, while slightly less than 1/3 thinks that they are quite or very much represented. Male representatives of younger generation who are already employed are somewhat more positive in this estimate, and younger unemployed persons are more negative in their estimate”, he concluded.

The public opinion poll Young people in Montenegro – Social Ornament or Social Capital?, within the same project, involved 600 respondents, citizens of Montenegro, age 16 – 27. Expertise and field work for the purpose of this project was conducted by Ipsos Strategic Marketing agency.