On the occasion of 27 January – International Holocaust Remembrance Day – Centre for Civic Education (CCE) calls upon the citizens and institutions to work together on the establishment of a society of tolerance and openness towards diversity, by learning the facts on crimes and other various and atrocious expressions of fascist ideology which left permanent marks on the humanity.

Education about the facts from the past, along with the promotion of culture of remembrance, are key mechanisms for dealing with the past and establishment of transitional justice. As individuals and society, we are ought to remember the Holocaust and all its victims. 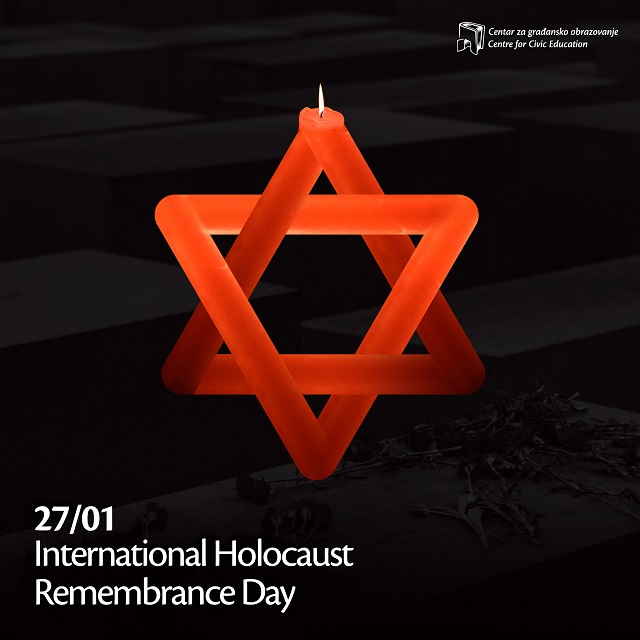 The Holocaust should be treated with special sensibility, without relativisation of this terrible crime or trivializing through different prisms. That could be counterproductive, not just for individuals who have some traumatic relation to consequences of fascist crimes, but for entire society in times during which we already witness the increase of populist ideologies and policies which advocate intolerance, exclusiveness and hatred towards diversity. It is particularly important to educate children and young people through formal education system on every crime of the past, avoid twisting the facts related to them, which could directly affect the prevention of crimes. Without the remembrance and respect for victims we can not have neither the sustainable peace nor the stability of societies based on the values of modern democracies.

CCE reminds that 27 January is commemorated as the International Holocaust Remembrance Day, because the concentration camp Auschwitz-Birkenau, largest and most infamous of all the camps in Nazi Germany, was liberated on that day in 1945. More than 1 300 000 people from across the Europe were held there during five years of its operation, whereby the majority was Jewish, and out of which 1 100 000 were killed. Among the people who had lost their lives there, 70-75 000 were Polish, 21 000 were Roma, 15 000 were Russian, and another 15 thousand were members of other nationalities. Only some 7 000 lived long enough to witness its liberation. Several days prior to its liberation, Nazis evacuated some 60 000 camp prisoners during the infamous “Death march”. UN General Assembly adopted the official resolution in 2005 on the commemoration of International Holocaust Remembrance Day and encouraged the development of educational programmes regarding the history of the Holocaust, thus demonstrating its determination to help prevent the act of genocide in the future.

Tamara Milaš, CCE programme associate and spokesperson of Coalition for REKOM in Montenegro