Starting at 12h00 in Media centre (Kolodvorska 3) in Sarajevo, press conference was held on the occasion of publication of text of Joint Language Declaration.

Vladimir Arsenijević welcomed participants on behalf of organisers, Association KROKODIL and NGO Forum ZFD. “After the series of regional conferences from the framework of the project LANGUAGES AND NATIONALISMS, held last year in Podgorica, Split, Belgrade and Sarajevo, more than thirty linguists and ‘men of quill’ have created the Joint Language Declaration in an attempt to raise the awareness and actively influence the existing nationalist linguistic practices in Bosnia and Herzegovina, Croatia, Montenegro and Serbia. Our objective is to deconstruct the unnatural state which is result of close ties of identity policies and linguistic science. Initiative came from young people from Sarajevo in order to spark a positive change in society”, said Arsenijević. In the end, he noted that more than two thousand people signed the Declaration in only 20 hours from its publication on site www.jezicinacionalizmi.com. 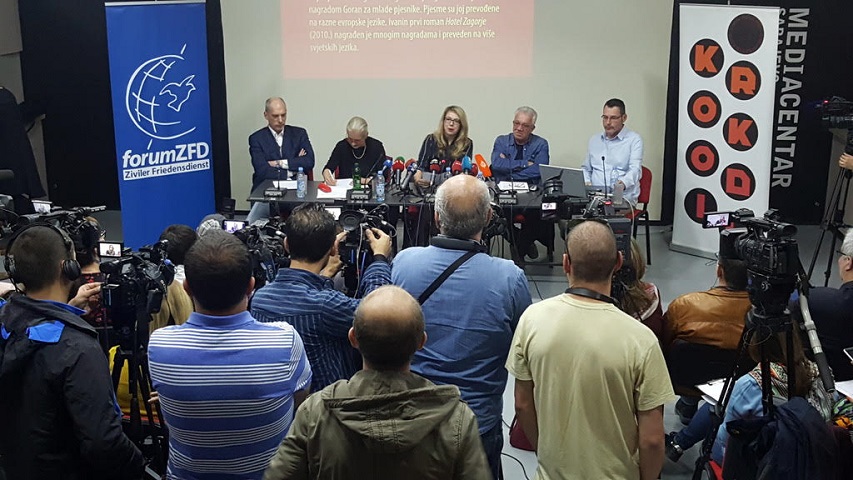 Writer Ivana Bodrožić has pointed out that this Declaration has no financial, structural or political pertinence. “Declaration must serve to change the climate, alter and raise the awareness. This is the transition period. Changes takes place bit by bit, processes last for years. Our intention was not to change the Constitution, the objective is to alert the public that there are different manners to perceive the language. We forewarn to the wealth of diversity, which is being devoured by the linguistic reductionism. After the war the language was broken too, hence we are forced to be clean in it”, said Bodrožić.

“Cleansing and mutilation of language affects the structure of our reflective and emotional processes. We do not advocate for linguistic anarchy, and on the other hand, we are not trying to come up with a new name for this language, we allow everyone to call it however they please”, Bodrožić added.

Borka Pavićević, speaking at the conference, pointed out that that the Joint Language Declaration is a form of healing, because “when we fragment the language, it loses its power, and internationalism is allowed to infiltrate it”. She spoke about dangers of practice of identification of religion and nation with language, and pointed out that language is one thing, and state the other. “Declaration is more popular among common people than the political elite. How come this political elite perceives it as a provocation? It expresses astonishment over something that should be regularity. Abnormal has become normal here, and vice versa. Glorification of particularism is not even nationalism any more, but it is becoming pure populism”, Pavićević pointed out.

Balša Brković said that official policies use the language as instrument of power, and that the Declaration activates the awareness of a joint language, thus creating a new spirit of emancipation: “Language should be what it has always been, i.e. a mean of communication. Declaration has pertinence because it annoys the nationalists, which is always a great thing”.

“We have a great joint modernist heritage, Krleža, Andrić, Isidora Sekulić, Lalić… Linguistic engineering distances us from that joint heritage”, pointed out Brković for the end of his presentation.

Enver Kazaz said that children in Bosnia and Herzegovina are exposed to linguistic racism, nationalistic and ideological hatred, because their schools carry out mental circumcision through rigid concept of identity. He added that Declaration calls for termination of segregation in school system and pointed out that language is not an ideological space, but an ontological, communicative, cultural, and humanistic one, a space of new horizons of knowledge; organic language is the one in which we think and feel.

“I am afraid that the practice of rigid norming of language has abolished what once was a joint heritage of language in this area. Liberalisation of norms opens the possibility of linguistic wealth”, emphasised Kazaz.

A panel discussion will be held after the press conference on the occasion of publication of text of Joint Language Declaration in Centre for Interdisciplinary Studies (Zmaja od Bosne 8, Sarajevo). Panel discussion will start at 18h00, and it will consist of two sessions.

Text of Declaration was made publicly available at the website www.jezicinacionalizmi.com, where each person who is consentient with the text of Declaration has the possibility of signing it. Around 2.500 signatures were collected only during initial 24 hours.

Project LANGUAGE AND NATIONALISMS is a result of two-year research mission and partnership activity of Belgrade based Association Krokodil, Association Kurs from Split, Centre for Civic Education (CCE) from Podgorica and PEN centre B&H from Sarajevo. Basic intention of this project is to problematize the issue of existence of four “political” languages in Bosnia and Herzegovina, Montenegro, Croatia and Serbia, through an open dialogue of linguists and other experts, as well as all other important and challenging topics where linguistic science makes an unprincipled intersection with identity politics. The situation is the same today. Despite the desired and realised emancipation and formal existence of four standards, identity-linguistic tensions have not settled down, while prescriptivism, infatuation with linguistic imperialism, thesis of the “fifty-year long linguistic slavery” and an entire diapason of misinterpretations are still present. Project was supported by Allianz Kulturstiftung and Forum ZFD.