H.E. Günther Mattern, ambassador of FR of Germany in Montenegro, was the guest of tonight’s European café, organised by the Centre for Civic Education (CCE) in cooperation with the Friedrich Ebert Stiftung. Within the ninth European café, ambassador discussed with the participants on the following topic: “Montenegro at the crossroad – where the country is heading and what can it benefit from Berlin process?”

European café was opened by Daliborka Uljarević, CCE Executive director, who assessed thereby that the process of “accession to EU is about to enter the stage which reflects the fatigue of Montenegrin authorities and institutions, and that the impulses gained through Berlin process are very important, as they are reminder that EU has not forgotten about the region, in spite of the numerous challenges it faces”. She stressed that Germany’s continuous attention to developments in Montenegro is aignificant for Montenegro “reflected in a strict, but friendly approach, able to simultaneously indicate on challenges which limit the development of rule of law and support the ones who are willing to deal with the same adequately”. 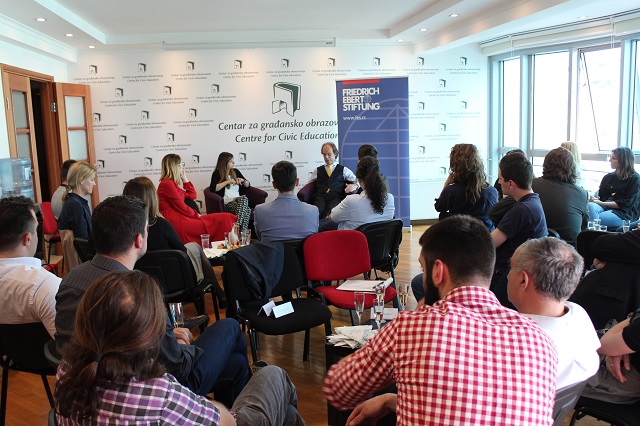 H.E. Günther Mattern, ambassador of FR of Germany in Montenegro, spoke with the participants on current challenges which Montenegro faces, as well as about the progress that was made on the path to full membership in European Union. They particularly discussed about the developments in region and potential influence on the perspective of Montenegro and the fulfilment of expectations of Berlin process.

Ambassador reminded that the work of Montenegrin government and citizens in the process of joining the EU does not only serve to reaching benchmarks set out by European Commission, but to permanent improvement of state and society for the wellbeing of everyone.

Ambassador Mattern also added that Montenegro can count on the benevolent and active support of German government in the process of joining the EU, as was the case so far.

“With the optimal preparation and credible, efficient institutions and public officials on every level of legislation, government and judiciary, Montenegro will gain the necessary political support by European Union member states for the inclusion in our circle”, Mattern concluded.

Objective of European café is the creation of platform for open discussion in informal ambient which would contribute to improvement of cooperation between civil society organisations and institutions. Such approach to dialogue on challenges of European integration in Montenegro, as well as within the EU, contributes to intensification of communication and informing of different segments of society, as well as in the mapping of problems and definition of proposals for their overcoming, all through the discussion of representatives of NGO in Montenegro and various stakeholders of that demanding process.

During previous two years, CCE organised several European cafés with the participation of representatives from civil society and national and international decision-makers related to negotiation process, and as of 2017, European café is being organised for young people as well. Previous guests of European café were: Mitja Drobnič, former Head of the EU Delegation to Montenegro, Aleksandar Andrija Pejović, Chief negotiator for the conduct of negotiations on the accession of Montenegro to EU, Gudrun Elisabeth Steinacker, former ambassador of FR of Germany in Montenegro and Zoran Pažin, Minister of Justice in the Government of Montenegro and Deputy Prime Ministre of Government of Montenegro, followed by the representatives of opposition of civic affiliation – Miodrag Lekić, President of DEMOS, Aleksa Bečić, President of Democrats of Montenegro and Dritan Abazović, then vice president of United Reform Action (URA) – with whom we spoke about the European values, and whether the same exist in Montenegro, and in which manner the opposition advocates for these ideas. Our guest list also includes Jozo Radoš, MP of European Parliament and member of the European Union – Montenegro Stabilization and Association Parliamentary Committee (SAPC), Milivoje Katnić, Chief Special Prosecutor in Montenegro with associates, and finally, Roman Hloben, ambassador of Republic of Slovakia in Montenegro. Another European café is planned for May.

Around 25 representatives of civil society organisations attended the meeting.