Daliborka Uljarević, Executive director of the Centre for Civic Education (CCE), assessed that populism is not just some harmless, everyday political or electoral rhetoric, but a phenomena which seriously undermines the institutional system and erodes the rule of law.

At the first Democratic forum, titled “How to transform populism from a threat to challenge on learning about democracy?”, organised by the CCE in cooperation with the Friedrich Ebert Stiftung, she stated that democracy implies pluralism, equality of everyone before the law, regardless of diversity.
That democracy, as she pointed out, should be based on values, not personalities.

“The specificity of prevailing populism in Montenegro is that the ones who question dominant power projects, linked to clientelist networks associated with Democratic Party of Socialists (DPS) and its leader, per populists, work against the state and state interests, because they equalize one party and state”, told Uljarević.
Hence, according to her, populism is not just some harmless daily political or electoral rhetoric.

“Populism seriously undermines the institutional system, erodes the rule of law, contaminates political culture, deletes responsibility as an institute, and introduces non-democratic arguments and methods. That is why we require an open and substantiated discussion, and therefore we need to insist on making it clear that this situation is not beneficial either for the citizens, or for the state”, elaborated Uljarević.

Zoran Pažin, Deputy Prime Minister of Government of Montenegro, told that the politicians do not like being associated with populism. However, per him, some of them uses populist methods when addressing the public.

“Populism is a trend that encompass presentation of personal interests as public interests, whereby populists do not address citizens as such, since the citizens are the holders of sovereignty, but as “holiness”, and as such are used as a fact, while many of those who succumb to populism are not adequately informed, or sometimes educated, to know better”, pointed out Pažin.

He estimated that populism comes as consequence of democratic deficit.

Professor Radovan Radonjić, Moderator of Democracy School, told that the number of interested people for the Democracy School was always two or three times bigger than CCE could have afford to enrol.

“The work was organised, it had its programme, literature, excellent professors. Our goal was not only to contemplate about democracy, but to picture it and go beyond, to say much about it which we previously didn’t know”, told Radonjić.

He considers that CCE made a remarkable feat with the Democracy School, as this is, in his opinion, the only case of a school with 27 generations of participants “which were organised continuously with undisputable results”.

Ivana Račić, Coordinator or Regional office of Friedrich Ebert Stiftung, believes that 14 years of work of Democracy School, with more than 770 participants and 650 lectures, speaks not only about the success of this School, but of the need to include this programme into informal education.

“Through such and similar programmes in the domain of political education, Friedrich Ebert Stiftung aims to empower and incite citizens to take an active participation in political life. I believe that in this way we provide our contribution to strengthening of democratic structures, fight against lack of political culture, establishment of rights of the state, establishment of social equality and democratisation of entire society”, emphasised Račić. She believes that such form of informal education can help overcome deep and serious divisions in our societies “that have been draining us for far too long”.

Branislav Radulović, Senator of State Audit Institution, assessed that the feature of populism is that it “feeds on its extremity”.

“It cannot exist if it has no opponents. In case there isn’t, it creates one. Populism has fed on communism, nationalism, great Serbian nationalism, reformist populism, and there is a great danger that today it feeds on something which is called Montenegrin national identity”, stated Radulović.

Miloš Vukanović, Coordinator of EUROCLIO for Montenegro and curator of History museum, told that populism in Montenegro has always existed, and that its presence was particularly notable after the AB revolution.

“However, after 2012, that populism gained on great acceleration. Economic crisis and social issues have aggravated, government and opposition have decided to give up on young staff which they produced and that could have helped them in the solution of these crisis”, considers Vukanović.

He deems it interesting that Montenegrin ruling government and opposition both “eagerly” embraced populism when it came to fight for the preservation of their positions for their privileges.

Jelena Džankić, Research fellow at the European University Institute in Florence, told that the increase of populism was notable worldwide during recent years.
“Young people should be educated to be able to recognise the phenomena of populism, and therefore such form of informal education is important”, she stated.

Sergej Sekulović, lawyer, told that serious organisations and structures which seek to govern the society must have a clear and transparent programme which, according to him, serves as their identity card and measure of capability to identify social problems and offer solutions for them.

“If you hear that the programme is essentially unnecessary, or that it isn’t the right time to model it, beware of some fraud, with potentially dangerous consequences”, told Sekulović.

Zlatko Vujović, lecturer on Democracy School, estimated that Montenegro has paved the road for populism, because the citizens are not satisfied with socio-economic situation, the confidence in political elites is undermined, and there is no dialogue between the position and opposition.

During the second part of first Democratic forum “How to transform populism from a threat to challenge on learning about democracy”, organised by CCE in cooperation with Friedrich Ebert Stiftung, he stated that Montenegro is deeply divided, and that there is great discontent among the citizens, which, according to him, makes room for populism.
“Montenegro is characteristic as it can be drawn into a powerful wave of strengthening of populist movements because of the considerable discontent of citizens with current socio-economic situation. We have lack of trust in political elites, boycott of parliament and absence of dialogue between the government and opposition”, estimated Vujović.
Some subjects within the opposition, per him, feel that populism can serve as a mean of acquisition of DPS’s electorate body.

„Populism could be the way of opposition against DPS. In electoral strategies of some of the oppositional parties, topics of identity are omitted, while on the other hand populist approach is used to ensure the support”, clarified Vujović.

He underlined that Montenegro needs a debate and argument based fight, because otherwise, as he told, what we are left with is an irrational discourse “where none offers the solution, but demagogy”.
“In such a situation populism would be dangerous, since we do not have the institutions, and such wave would drive Montenegro back for decades”, said Vujović.

Čedomir Čupić, professor at the University in Belgrade and lecturer at the Democracy School, estimated that Montenegro has made a great strategic step forward with the accession to NATO, and, as he clarified, could pose the line of defence against the populism in the future.

Čupić believes that most dangerous form of populism is the one which exists in Serbia, or the combination populism and naked pragmatism, as he elaborated.
“In fact, that is the demolition of each ideology. Naked pragmatism is worse than any ideology, except for totalitarian. It is the complete demolition of every value”, estimated Čupić.
He told that Donald Trump, president of United States of America (USA), came on top of the wave of populism.
“Still, you have the institutions in America, hence, no matter how many surreal promises Trump has made, they simply cannot be implemented when you have the rule of law”, told Čupić.
Per him, underdeveloped countries are more prone to populism. However, the ones that are developed are also not immune to syndrome of populism.

“Such examples are the USA, Canada, Scandinavian countries, France, United Kingdom. Populism is always present there, question is what chances it gets”, clarified Čupić.

Nebojša Babović, Head of the PR Bureau of municipality of Berane, told that populism is the reaction to weaknesses of democracy, that its cause is related to economy, and that the citizens of Montenegro have been living in a populist state since 1990.

“Basically, everything that happens to us is the result of conflict between the elites and the people. Montenegrin elites are bit more distant from the democracy establishment, affirmation of human rights, but they do not keep in touch with what is happening on the field, and that is why populism lurks behind every corner”, explained Babović. 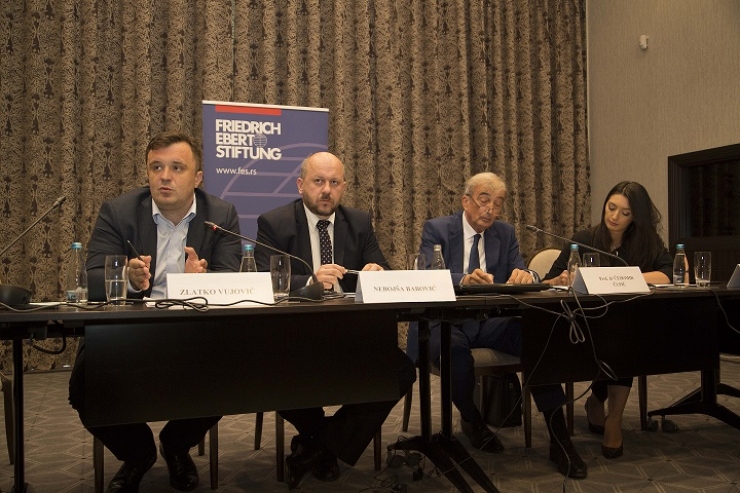 Tamara Milaš, Spokesperson of RECOM for Montenegro, told that Montenegro is further encumbered by the “immutability” of government and pointed out that facts from more recent history should not be twisted, but incorporated into formal education system.

“There is no change of the government of Montenegro, and that government is an important part of Montenegrin history about which younger generations do not know almost anything. War events are not in the focus of educational structures. Hence, for instance, we have young people who do not know anything about the events which took place in Srebrenica”, clarified Milaš.

Žarko Puhovski, professor at the University in Zagreb and lecturer at the Democracy School, told that “quasi populism” in Montenegro is caused by the fact that political field, due to the series of internal and external reasons, is reduced to one dimension.

According to his estimate, populism comes to life when democracy is taken too seriously.

“Democracy is not a value, it is a method. And form is the essence of democracy. When we start creating value and ideology based on democracy, then we are one step away from populism. When we start talking about moral and values – that’s when populism occurs”, explained Puhovski.

Vladimir Raičević, Executive director of IPSOS Strategic Marketing of Montenegro, told that populism presents “a game of chance” and shortcut to aim or money, and that where is democracy and will of the majority, political elites mostly succumb to the majority.

“If we have a government which is not burdened with the result, then it will implement the measures which are not populist. It will implement the reforms which are important and necessary. If we have a situation where government is not stable, then it will be more prone to populism, because it is focused on next cycle of elections”, told Raičević.