Centre for Civic Education (CCE), in cooperation with Heinrich Böll Stiftung, organised a conference today titled “Equal chances for all media in Montenegro”.

Daliborka Uljarević, CCE Executive director, opened the conference assessing that the situation in media is “characterised with deep polarisation and wide politicisation of media in Montenegro, which is encumbered by poor quality of reporting”.

She reminded that the CCE has been vocal about this issue for already six years, and that its findings continue to arouse the attention of international stakeholders. “However, we regretfully note that public funding of media in Montenegro remains unregulated, uncontrolled and opaque which leaves media in an ufavourable market position, followed by reasonable doubt that this constitutes an attempt of influence on editorial policy, or on the existence of soft censorship”, she added. 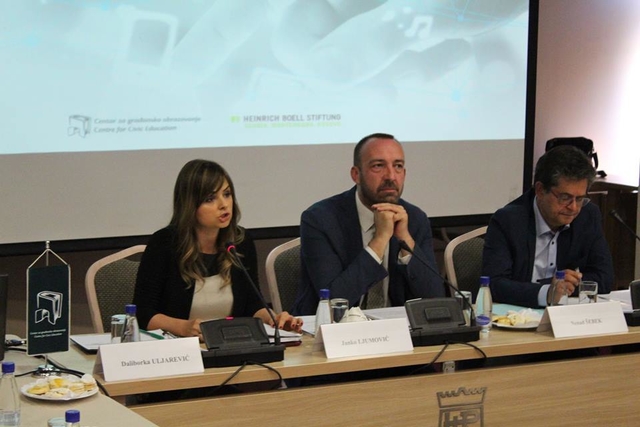 Uljarević underlined that necessary legal interventions were not made. “Existing legal framework does not recognise the potential connection between the public financing of media on various basis and influence of that money on freedom of media and economic (in)stability of media, nor observes the decisions on advertising as potential form of discrimination of media and intervention on editorial policy… Data clearly indicate that financing of media from public funds is connected with the manner in which that same report on the activities of government, in other words, whether they have positive or critical approach, whereby the ones who report positively are being rewarded, while the latter are being sanctioned in a manner which questions their existence”, she told and emphasised that citizens cannot be satisfied with the performance of invested funds. “It is in the interest of public to have the media that are able to preserve their independence and endure in spite of the obvious political and economic influence and pressure, and thus contribute in the establishment of accountable institutions”, concluded Uljarević.

Janko Ljumović, Minister of Culture in the Government of Montenegro, pointed out during the opening that Montenegro is dedicated to democratic regulation of society when it comes EU accession, whereby freedom of expression represents a fundamental human right. He added that this specific matter, as necessary multi-sector interaction of several factors, laws and subjects, is also a complex area for much more developed countries and traditions.

“Character of public funds and media public interest, regardless of form of regulation, should be focused on public policies which – through the sphere of media – improve life and culture of community. Contrary to that, underlined commercialism with questionable aesthetic values or disregard of right to privacy are not in our interest when it comes to participation in the allocation of public interest”, estimated Ljumović.

“Concering public funds, it is clear that we need to follow government’s policies of stabilisation of public finances, macroeconomic projections and public fund savings. From the perspective of specific panel, room for potential saving and efficient use of public funds are digital platforms of bodies of government – interactive communication with citizens, or proactive approach in the informing, which need not be presented in marketing within other models of communication and public relations”, he told.

Nenad Šebek, Director of the Regional office of Heinrich Böll Stiftung, told that CCE’s study represents an important step in the fight for free thought, word and media. “Unfortunately, this substantiated issue – i.e. that your money is spent selectively on certain media and deprived to other is an universal weakness of Western Balkans. We will not prescribe how you will regulate relations in media. Heinrich Böll Stiftung is dedicated to acceleration EU path of these counties, because we help activation of civil society”, he clarified.

Nikola Bošković, CCE Programme assistant, clarified the methodology of research, but also reflected on the transparency of public sector bodies when it comes to submission of data on the investement of public funds in media and related subjects during 2016. “A total of 334 public sector bodies were covered, out of which 253 replied, or nearly 76%, while 81, or 24%, did not submit the requested information. Compared to earlier period, progress was noted in the part of greater openness of certain number of bodies, which reflects in total increase of percentage of replies on free access to information requests, since the previous response rate was between 66% and 72%”, stated Bošković. Speaking on the acting of companies where the state has the majority stake, he pointed out two contradictory examples: “13 Jul Plantaže rejected the request to submit the information, explaining that it protects bussiness secret. On the other hand, Elektroprivreda, as one of the major advertisers, submitted all information in a detailed and accurate manner”, added Bošković.

Ana Nenezić, CCE Programme coordinator, presented a detailed analysis of annual report for 2016, with gathered data related to the amount of funds which public sector bodies allocated to media, informative agencies and services, marketing agencies and production houses on the basis of agreement for the provision of services, specialised services and other grounds.

Reflecting on the structure of allocation, Nenezić indicated “In the case of print media, Pobjeda once again received considerably more compared to others, or 61% of all allocated money for print media, while the rest was allocated to Dan, Dnevne novine, and Vijesti, in significantly lesser percentages. When it comes to TVs, 41% went to RTCG, while Vijesti received 11% of public funds, and Pink and Prva TV received 9 and 6% respectively.

Amongst radio stations, Antena M received 31.625,00 EUR or 32%, radio Jadran received 24.245,00 EUR or 25%, and Skala radio received 22.210,00 EUR or 22% of total funds, while other radio stations shared much lesser percentage of allocation. Due to aligned methodology, she clarified that this amount did not account the amounts allocated by the Agency for electronic media for assistance to commercial radio broadcasters, through annual and programme grants, nor the funds of Commission for the allocation of part of revenue from games of chance, through the project financing. If these were included these funds, out of the said broadcasters, Antena M would rebound significantly with an additional amount of 60.169.00 EUR, which would make a total of 91.794,00 EUR. Out of the three first-ranked broadcasters, radio Jadran received considerable amoount from these funds, or 7.955,00 EUR. When it comes to portals, Portal Analitika received 46% of all funds which public sector bodies invested in portals, while every other portal on the list received payments from Elektroprivreda in much lesser amounts. Though they are popular, this tells us that public sector bodies do not perceive portals as important, and consequently do not invest that many funds in them.”

Nenezić stated that there are identified tendencies of financing of certain media and presented comparative findings for previous four years, during which public sector bodies allocated 8.348.151,90 EUR for these purposes. “These allocations, according to the volume and significance of sector in which they are invested, demand control and full transparency, which does not exist at the moment”, she concluded.

Duško Vuković, journalist and one of the authors of research, pointed out on clear system which was brought to light by this research. As he estimated “Researches which CCE has been conducting for years have shown that Montenegro is an illustrative example of state in which the media financing from public funds is not regulated, and that this is the case of an activity which is opaque and uncontrolled. However, there is some form of system in the midst of all that irregularity, where pro-government-oriented media have less trouble acquiring money from public funds, and which editorial policy prevents any critical insight of public in government’s activities, as opposed to supervising it. In that system, certain media contract ostensible paid journalist activities with public bodies and local authorities, and both hide it from the citizens. As a rule, those that engage in investigative journalism are not supported with tax payers’ money by the government.” 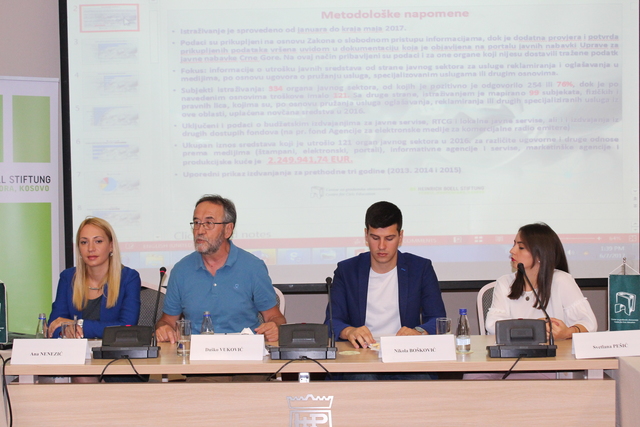 Draško Đuranović, Editor in chief of daily Pobjeda, underlined that “it is necessary for CCE to improve the methodology of research and assess that research in this form provides a false image of allocations from budget to media”. According to him, use of data, without the classification on its basis, presents a great problem for research. “I disagree with the statement that Government has not done anything for the media. When you exempt someone from paying a tax or reporgramme it, you bring the rest of us who settle their obligations regularly in an unfavourable position”, pointed out Đuranović.

Smiljka Miličković, Marketing director of daily Dan, estimated that critically oriented media are discriminated. “Ministries have not allocated a single cent to Dan. We do not blame other media, but state institutions that have created the environment in which some media are rewarded, and some sanctioned”, she told.

Darko Šuković, Editor in chief of Radio Antena M, reproached CCE for consulting only one side during the research – state bodies. “Had you consulted someone from Antena M, they would have told you that these were the funds for radio and portal. I believe that you should only ask for analytical cards of media next time”, he stated.

Marijana Bojanić, Director of TV Vijesti, accentuated the need of creation of media development strategy. “Our media market is being destroyed by the advertisers and media from region. This is legit, as long as the state allows it, but it shouldn’t be like that, because we are not equal in that manner. I reiterate that we do not have equal baselines. When we were founded, we were not able to obtain national frequence, which meant no commercials”, she clarified.

Conference was marked by an intense and occasionally brisk discussion with more than 20 interventions from the participants, who had highly diversified, even confronting opinions. However, joint conclusion was that a substantiated dialogue was necessary, as well as that the system of financing of media must be regulated, because in this manner it only keeps the media in an unsustainable position.

Conference, which gathered more than 50 participants, presents final stage in the implementation of eponymous project which CCE conducts with the support of Heinrich Böll Stiftung. Project is being done within the framework of CCE’s subprogramme Democratisation and Europeanisation. Its objective is to improve the awareness on the responsible spending of funds from the Budget of Montenegro, by indicating on the relation between public sector in Montenegro and media, through financial allocations on the basis of contracted services.

Complete report is available at: https://media.cgo-cce.org/2017/10/Jendake-sanse-za-sve-medije-2017-ENG.pdf