Montenegro, as it approaches membership in European Union (EU), must do a lot more to improve position of young people, estimated Nikola Janović, Minister of Sport, stating that this ministry has great ambitions for that population.

During today’s agora titled “Montenegrin dream of different Europe”, organised by Centre for Civic Education (CCE), he stated that his Ministry has allocated 170 000 EUR for the first time since 2011 through a contest to youth organisations which submitted their projects. 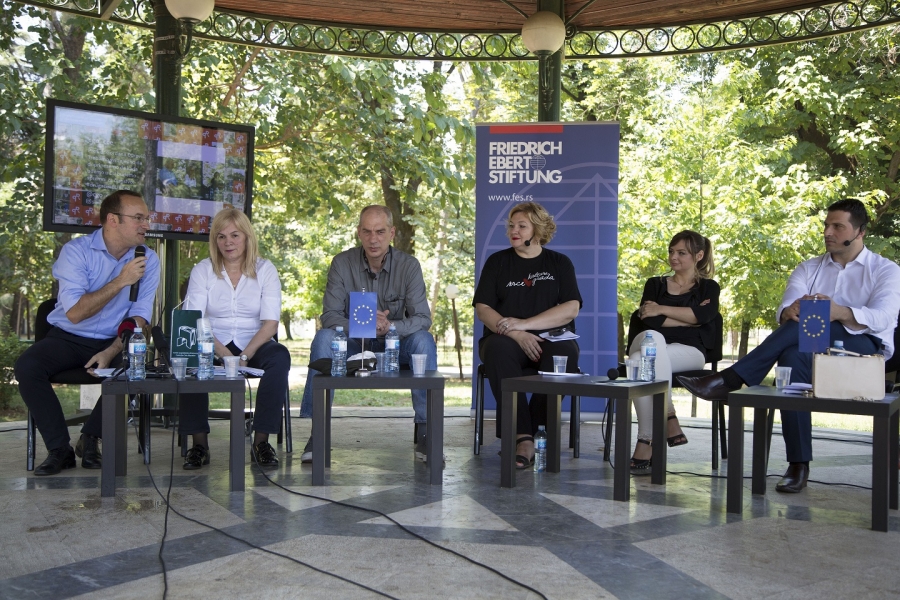 “I believe that sport has great educational character. That is precisely why the Ministry of Sport aims to give a particular focus to young people, children’s sport, and to try and involve as much children in Montenegro as possible in sport activities and lead them to right system of values”, said Janović in the amphitheatre of Petrović‘s castle in Kruševac.
He estimated that Montenegro, as it approaches to the EU, must do a lot more in order to improve the position of young people. “Within the Ministry, which is headed by me, we have great ambitions for this, and even though young people are of every ministry’s concern, I believe that this is inter-Ministry cooperation.”

“We have supported 36 projects this year, out of which some are related to promotion of economic and social security of young people, suppression of hate speech, prevention of drug addiction, promotion of healthy lifestyles”, reminded Janović.

Daliborka Uljarević, executive director of CCE, deems it is important to open a dialogue between those whom young people can learn from, but at the same time, those who shape socially-political reality can and must be open to hear a lot from young people directly.

She reminded that in ancient times agora was a space for serious political consideration and decision-making on most important matters.

“Hence, my appeal to you, young people, is not to allow political parties, media, Government, NGOs or anyone else determine how will you think or to act on your behalf, without you previously saying what you think of it”, pointed out Uljarević.

Writer Balša Brković stated that Montenegro is the only place where he has seen students resembling politicians.

“All around the world students are always casual. Only here they look like an offspring of some party. This is precisely a problem, especially when connected to the fact that experience of student insurgency is Montenegro is rather poor, that it remained on the level of faculties’ halls even in 1968”, pointed out Brković.

He said that Podgorica is the only capital city in Europe where students have never before had a fight with the police.

“It is a very nice experience. You cannot be students if you finish your studies without experiencing conflict”, told Brković.

Gordana Đurović, professor at the Faculty of Economy at the University of Montenegro, said that there is increase in number of exchange students coming to Montenegro, who are willing, as she said, to explore not only nature but science too.

“We have a lot of young people who go abroad to study, and the majority of them returns with good knowledge and energy, and they are highly valuable to our society”, underlined Đurović.

According to her, EU simultaneously provides numerous new forms of freedom, primarily economic, as well as developmental ones, in which Montenegro is being affirmed as a state with all of its values.

“We expect a lot of the EU, maybe even more than it can offer us, especially nowadays when it has lots of its own turbulences. We will probably be more prepared for membership while we wait to see a new contour of Europe”, stated Đurović.

Snežana Burzan, director of cultural informative centre “Budo Tomović”, estimated that basic motives behind the departure of young people from Montenegro and other Balkan states lie in the desire to perfect on other universities, faster employment, as well as the desire to form families in wealthier environments.

“When it comes to employment, I believe that all of us are obliged to work more to that end. We must work to open new working places for young people, because the number of unemployed among this population must begin “melting down” in the Agency for Employment”, pointed out Burzan.

Vladimir Pavićević, Professor at the Faculty of Political Sciences at the University in Belgrade, estimated that there are three values connected to the European idea.

“First great value, which implies the Montenegrin dream of European idea, also implies the openness to what is other and different. It also occurs from ancient ages”, stated Pavićević.

Second great value, according to him, related to the European idea is idea of freedom. “Primarily the idea of freedom of individual to think, speak and act in the context concerning the common life.”

“Third great value is the idea that the EU is recognised through concept that is now advocated by every official who comes, and it is the concept of rule of law, instead of the rule of people”, said Pavićević.

The event, organised in cooperation with Friedrich Ebert Foundation, was attended by 50 activists and representatives of youth and student organisations and youth organizations of political parties.