On the occasion of the 11 July – Remembrance Day of the genocide in Srebrenica, the Centre for Civic Education (CCE) pays homage to victims of that crime and reminds that the Srebrenica tragedy must not be forgotten, but that memory of the victims in Srebrenica must become part of the compulsory culture of remembrance, as well as that it is necessary that all those responsible for this crime receive justice.

Genocide in Srebrenica represents the most massive crime committed on European soil after World War II, when members of the Bosnian Serb Army have, from 11 to 19 July 1995, systematically killed at least 7,800 unarmed Bosniaks aged 14-70. Crimes committed in Srebrenica in July 1995 were subject of nine trials before the International Criminal Tribunal for the Former Yugoslavia, while the Appellate Council of the Dutch Court has recently confirmed that the Netherlands has a partial responsibility for the deaths of 300 Muslims killed in Srebrenica within the UN protected zone, at the base of Potočari. 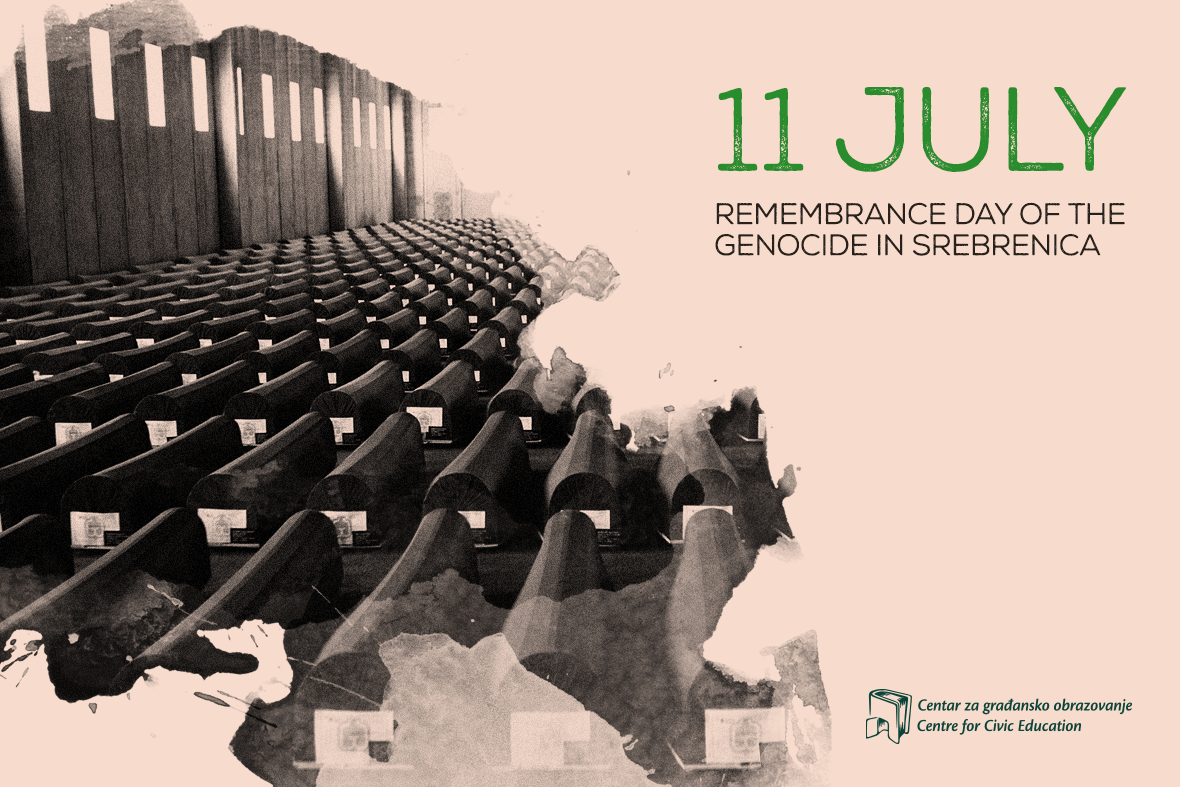 It is very important to insist on determination of responsibility of all those who contributed in various ways to genocide in Srebrenica and to, at the same time, foster the culture of remmebrance of victims. It is worrying that Montenegrin education system still recognizes neither this, nor other war crimes, from contemporary history as essential for processing, which leads to the questionable knowledge of young generations. Education is being approached in a populist manner without sufficient dedication to public interest, especially when it comes to sensitive issues from our past. The CCE has been pointing this out also in the analysis of the history textbooks and curricula “Montenegrin textbooks: what do they conceal and reveal on the contemporary history of Montenegro?”. Consequently, we get generations of students and pupils who know nothing about Srebrenica, because there is not even one sentence about genocide in Srebrenica in textbooks. Even if these lessons existed, the question of a professional cadre to teach this would arise, given that this period is not even being studied in the history department.

Montenegrin Assembly has, in 2009, adopted Declaration on Acceptance of the European Parliament (EP) Resolution on Srebrenica, which condemns this crime and committed itself to affirming the truth and contributing to the achievement of justice, as well as development of culture of remembrance as a mechanism for dealing with war past. However, effects of these objectives are not seen in the practice.

CCE, alone or as a reference member of the Coalition for RECOM, invests effort in order to through its work related to dealing with the past, point out also this problem, as well as to continuously insist on the need to prosecute war crimes, seeking justice for victims, through monitoring of the relevant institutions in this area, and advocating for establishment of culture of remembrance whose important pillar is the educational system. This issue in the region and Montenegro is being held in public discourse precisely by non-governmental organizations, as the authorities almost agreeably refuse to position it, counting on the lack of political votes on it.

Tamara Milaš, Programme associate and Spokesperson for Coalition for RECOM