Centre for Civic Education (CCE) has today, in the framework of the project “Employment to Inclusion”, presented findings of the Public opinion research on perception of persons with disabilities (PWD) in the process of employment.

Marija Cimbaljevic, CCE project assistant, reminded that within this project eight persons with disabilities (PWDs) from Podgorica, Danilovgrad and Nikšić went through training on communication skills and human rights, with emphasis on labour rights, after which they had the opportunity to further professionally improve and apply acquired knowledge in seven non-governmental organizations and in the institution of the Protector of Human Rights and Freedoms of Montenegro through six-month paid work engagement. ”In addition, within project activities, an access ramp at the entrance to the residential business facility Maxim was installed as contribution to reduction of architectural barriers, and campaign was produced for employers and PWD on importance of employment and utilization of benefits that Employment Agency offers in this regard”, Cimbaljevic stated.

Petar Djukanovic, CCE programme coordinator, pointed out that ”there are around 11% of PWD in Montenegro, of which 5,000 are on the Employment Agency’s records as unemployed, and only a hundred of them are working. According to the most recent data of Employment Agency, only 194 employers are exercising thei right to subventions on salary for 310 persons with disability, of which 197 are employed for an indefinite period of time. Despite some improvements, still very little PWD is actively working, while statistics are rather unreliable”. He assessed that such research is ”important as indicator of the change in awareness and trend of these changes in order to design new and improve existing policies to be more effective in removing barriers that exist”. ”These barriers exist evidently and above all in our heads, and liberation from them is a manner to accomplish all potentials that PWD have, which are immense, primarily for benefit of them themselves, but also of us as a whole society”, concluded Djukanovic. 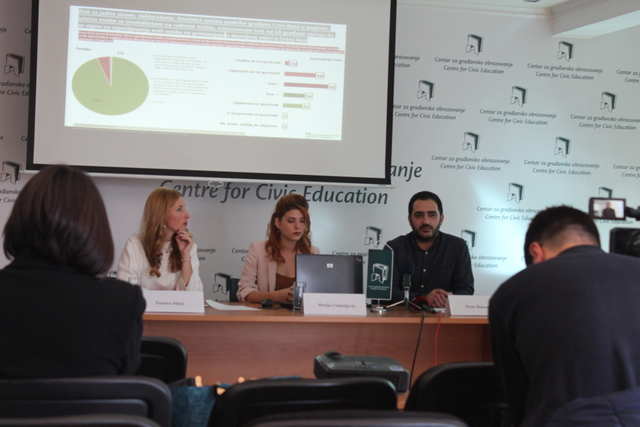 Tamara Milas, CCE programme associate and coordinator of the project ”Employment to Inclusion”, presented a part of the findings of research on general perception of persons with disabilities:

In the perception of citizens of Montenegro, associations of pity towards PWD prevail, thus 39% of them said that they were not sorry for PWD, while 30% of respondents, as the first association on PWD, stressed their physical disadvantages. Much more rarely areas of their discrimination are highlighted as spontaneous associations, and extremely small number of respondents have inclusive attitude towards PWD.

Asked to list areas in which they believe PWD have most difficulties to exercise their legal rights, respondents emphasized employment (67%), then use of public spaces, public transport and facilities (26%), followed by schooling and education (21%), as well as social protection and health services (20%). Public undeniably recognizes work sphere as the current largest problem for PWD inclusion. Inaccessibility of public areas is more often refferred to by citizens with higher education, while education is more often refferred to by women and young people, and social protection by citizens aged 45-60 and those with lower education.

It is alarming that as many as 63% of respondents do not know that there is a law in Montenegro that prohibits discrimination against PWD.

Petar Djukanovic, further focused on findings of the research related to labour rights and capabilities of PWD in Montenegro.

There is considerably low level of awareness among respondents of legal measures that encourage employers to employ PWD, thus even 61% of them are not familiar with measures for awarding grants for adaptation of workplace and work conditions for PWD employment, 68% of them do not know about measure of participation in financing of personal costs for assistants (aide in work) for persons with disabilities, 70% are not familiar with the measure of sub-budgeting of salaries of a person with disability and 75% do not know about credit funds under favorable conditions for purchase of machines, equipment and tools necessary for employment of persons with disabilities. Expectedly, familiarity with this topic is higher among citizens who personally know PWD.

Whilst, on the one hand, strong support of citizens of Montenegro in regards to particiaption of PWD on labour market declaratively is dominant, namely 94% of respondents support PWD employment entirely, while at the same time six of 10 citizens, i.e. 61% of respondents believe that measures for employment of these persons is not being implemented in sufficient extent in Montenegro.

At the same time, almost 3/4 of citizens of Montenegro (72%) estimate that discrimination against PWD in exercise of their labour rights exists, while 22% of respondents do not agree to this assertion. Opposing opinion, more than average, have citizens of basic education, while greater extent of ignorance is demonstrated by those who do not have a personal contact with PWD.

In average, almost 2/3 of citizens of Montenegro (63%) believe that number of cases of discrimination against PWD during employment is greater, while 24% believe that there are more cases of discrimination during performance of work that are even not being reported to relevant organs. Reasons not to report to relevant organs, respondents see in the fear of PWD to decide upon this step, but also in various forms of learned helplessness of PWD, as well as lack of trust in institutions and lack of support both of closer environment and society and system of rule of law themselves.

In accordance with previous findings, belief that Montenegrin employers are not yet ready to employ PWD is predominant (65%), while 29% of respondents believe that majority of employers would rather be ready to pay the necessary fee to the state than to accept to employ PWD. Four of 10 citizens of Montnegro who believe that employers would rather pay the fee to the state than employ PWD as a main reason for this attitude see in PWD themselves, i.e. in perception of them as someone who is not productive enough or due to whom the job will deteriorate. Every fifth citizen recognizes also the general mentality approach and prejudice towards PWD as a problem, while 14% of citizens estimate that un-informed employers are the essence of this negative attitude, but also non-obligatory legal provisions for employers to behave differently.

However, every tenth citizen of Montenegro believe that PWD should not even be working if the state would allocate enough money for them on annual level. This indicates that inclusive attitude towards these persons, not only in work atmosphere, but in general too, is till closer to declarative level, than to acceptance of PWD as inseparable and valuable part of society.

Public opinion research on perception of persons with disabilities (PWD) in the process of employment has encompassed 803 respondents, adult citizens of Montenegro, and it was conducted from 3 to 6 October 2017. The expert part of research was conducted for the purpose of project by agency Ipsos Strategic Marketing. The research was conducted within the project “Employment to Inclusion!”, that CCE is implementing in partnership with agency Represent Communications from Podgorica with the support of Employment Agency of Montenegro, whose objective is contribution to improvement of employability of PWD through a series of activities aimed at strenghtening of their personal and professional capacities for easier inclusion in labour market.