System for fight against corruption at the local level, as its key supporting level must have Government that is accountable to citizens with equal relation toward all municipalities, credible Agency for Prevention of Corruption and strong Prosecution, as it was stated at national conference of the Centre for Civic Education (CCE).

Conference ‘Think Locally – Act Locally! – Fight against Corruption at the Local Level!’ was organized within the same-name project in cooperation with NGO Bonum from Peljvlja, Incubator from Kotor and Centre for Investigative Journalism from Podgorica, with financial support of the European Union and Ministry of Foreign Affairs of Kingdom of Netherlands. 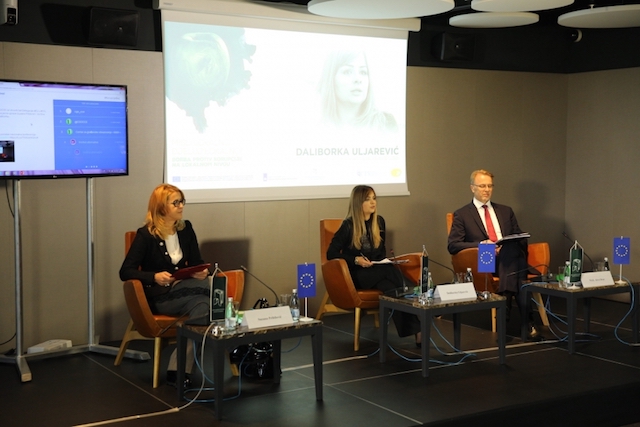 Executive Director of the CCE, Daliborka Uljarevic, pointed out that 63 percent of citizens, according to research findings of that organization, recognize corruption of local authorities, and they dominantly assess that, as she said, harmfulness of corruption that occurs at high level is the same as of the one occurring at lower levels, such as the local one.

“The key reason for development of corruption is in its impunity i.e. in a non-functional system of processing of identified cases of corruption characterized by politicized and selective approach of authorities, which is certainly not an incentive for higher level of citizen activism and reporting of corruption”, Uljarevic pointed out.

She assessed that it is necessary dedication of all – both national authorities in the part of the supporting framework – and local authorities themselves, which, as she said, need to terminate with the policy of ‘ignorance’ and instead ‘listen to the voice of citizens, not parties’.

“Therefore, system for fight against corruption at the local level, as its key supporting lever, must have Government that is accountable to citizens with equal relation toward all municipalities regardless who has the power in each one of them, credible Agency for Prevention of Corruption and strong Prosecution, that gives a hallmark to the fight against corruption un-stained by undue political pressure, lack of integrity, expertise and courage”, stated Uljarevic.

Head of Delegation of the European Union to Montenegro, Aivo Orav, believes that Montenegro has achieved a certain level of preparadness for fight against corruption, when it started negotiation process, assessing that much more needs to be done in order for track record in regards to investigation, conviction and incrimination of cases of high corruption.

“In most cases, corruption that is being reported at all levels shows that local self-government is not immune from it. Case of ‘Kosljun’ and others that are involving local self-government in Budva are actually an illustration of this and this is something that is in the hands of judiciary to resolve”, Orav stated.

Thus, as he pointed out, local self-governments have to strengthen their capacities related to fight against corruption.

“This means that greater opportunities must be created for development of local self-governments and improvement of their services towards citizens in every sense. Development of local communities to actively participate in the fight against corruption is necessary in order to incur real changes. The only manner to fight corruption is for all entities to join forces in this fight – relevant ministries, local self-governments, judiciary and civil society”, Orav concluded.

Minister of Public Administration, Suzana Pribilovic, recalled that Government adopted Operational Document for Prevention of Corruption in Areas of Special Risks – as Annex to the Action Plan for Chapter 23 – Judiciary and Fundamental Rights, which as she said, among seven areas that are in particular risk for emergence of corruption includes also area of local self-government.

As she said, one of the mechanisms for achieving principles of ethics and integrity of local officials and employees is drafting of the Integrity Plan.

“This act is significant from the aspect of fight against corruption at the local level, since it represents an internal anti-corruption document whose purpose is to influence prevention and elimination of possibilities for emergence and development of various forms of corruptive behavior within organs, organizational units and at the level of each individual workplace through set of measures of legal and practical nature”, Pribilovic stated.

She pointed out that training of officials and employees is in direct connection with fight against corruption at all levels, as well as at the local level, assessing that raising their knowledge and skills represents a basis for preventing this phenomenon.

Programme coordinator in the CCE, Ana Nenezic, asseseed that the biggest challenge that this organization has observed in the analysis of local self-governments’ reports is that many of them did not establish internal audit unit.

“Among the issues that we have noticed are non-performance of internal audit when there are personnel capacities for this, insufficient transparency of processes in local governments and self-governments, especially in the area of finance and budget, non-existance of Ethical Commission or in cases where it does exist – non-performance of analysis of its work”, stated Nenezic.

The problems were also noticed, as she added, relating to inadequate registering of corruption reports, especially when, as she stated, 11 municipalities did not adopt the internal instructions for registering corruption reports and acting upon these reports, “nor did they provide protection of identity of a person who would file a report”.

Public Policy Researcher at the Institute Alternative, Ana Djurnic, said that only seven out of 23 municipalities have a human resources management unit, stating that this deficiency contributes to corruption in employment. “Draft Law on Local Self-Governments attempts to solve problems related to corruption, but it is not fully contemplated how solutions will be implemented in practice”, Djurnic stated.

Executive Director of the Centre for Investigative Journalism of Montenegro, Milka Tadic Mijovic, said that during the project and for the purpose of texts, researches were conducted in which more than 100 different interlocutors of local self-governments, representatives of judicial bodies, political parties, civil society, experts and ordinary citizens participated.

“We opened the project with a serial from Kolasin. The Kolasin authorities used public funds for personal purposes, abused its employees, rewarded obedient ones with public land transactions that municipal governments privatized and sold under the price on suspicious tenders, thus municipality suffered millions of damages”, stated Tadić Mijovic.

She said that the highest number of criminal charges for corruption, when it comes to local level, was filed against the former mayor of Podgorica.

“We have published several texts about cases ‘Bazar’, ‘Carine’, ‘Alluminium Plant Podgorica’, ‘Tobacco Plant’ and it has been found therein that huge damages were inflicted on citizens and local government, in the form of tens of millions. Many of these cases did not have a court epilogue”, said Tadic Mijovic.

Conference ‘Think Locally – Act locally! – Fight against Corruption at the Local Level!’ was organized within the same-name project in cooperation with NGO Bonum from Pljevlja, Incubator from Kotor and the Centre for Investigative Journalism from Podgorica, with financial support of the European Union, under the Instrument for Pre-Accession Assistance (IPA) 2015, while it was co-financed by the Ministry of Foreign Affairs of the Kingdom of Netherlands.