Local self-governments should recognize corruption acts and, in the part of their jurisdiction, take disciplinary measures against officials who perform them, assessed Vice-President of Berane Municipality, Rade Kljajić.

Today, in the second part of the national conference ‘Think Locally – Act Locally! – Fight against Corruption at the Local Level!’, organized by Centre for Civic Education (CCE) within the same-name project, financed by the European Union, he said that problem of corruption in the previous period was present in that municipality, “but there were no feedback reactions from the competent institutions”. 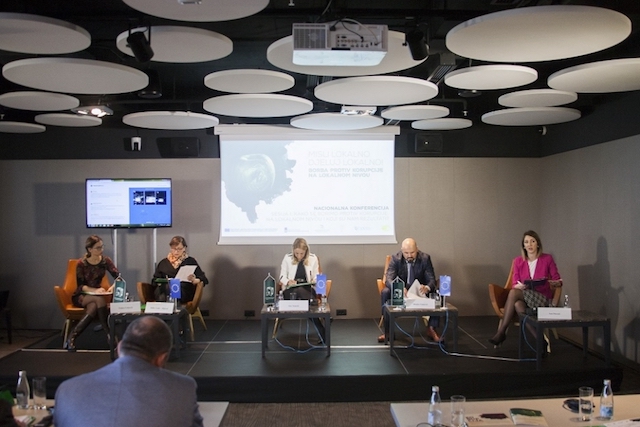 “Only with the feedback effects of state organs and those charged to tackle corruption in the full extent, which is present not only at the local level, but far more at the state level, can corruption be suppressed”, Kljajić estimates.

It is upon municipalities, as he said, to establish and recognize what corruption acts are and, in the part of their jurisdiction, to take disciplinary measures against officials who perform them, or, as he said, to discharge them from work.

“However, municipal authorities have less responsibility than the state ones. If we recognize that this is a criminal offense, we cannot be the one to conduct criminal proceeding. The state should be processing this”, Kljajic assessed.

President of the Bijelo Polje Municipal Assembly, Dzemal Ljuskovic, said that transparency of work of local self-government and public services are key preconditions for creating positive atmosphere and trust of citizens in the work of public services and, as he added, they are a reliable defence against corruption and corruptive behaviour in society.

“Subjects involved in the fight against corruption must continue to even more persistently and more insistently continue with implementation of anti-corruption measures in order to reduce this disease of our society to the lowest possible extent. Results that we are achieving are visible and encouraging”, Ljuskovic said.

The following tasks in the field of fight against corruption, as he said, are defined by the new Action Plan, which was made for the current and next year.

Integrity Manager of Municipality of Tivat Jela Mrdak said that risk of corruption exists everywhere and anytime, pointing out that the high-risk area is asset management.

“We defined this area through measures and activities of the Action Plan for Fight against Corruption, where we suggested to all municipalities to look into that part since it is an area that is recognized in all segments because there is no record and inventory of assets in the manner it should be. It is upon employees to help and establish a system to lower the risk to as lesser extent as possible”, Mrdak said.

Vice President of Municipality of Niksic, Sonja Nikcevic, said that every environment is appropriate for a corruptive act to be exacted if, as she said, there is an ambition to do something like that.

“However, effort that this local government makes is to make the work transparent and highly open in all segments. There is good cooperation with the civil sector, and NGOs are present in the preparation of all our action plans, because only in this manner a higher level of communication with the public can be achieved”, Nikcevic explained.

Chief Administrator of Municipality of Budva, Danica Kovacevic, responding to the question of what was specifically done when it comes to meeting the reprogrammed tax obligations, said that all salaries of employees in that local government administration are being regularly paid.

“As for all other reprogramming, it is also in the system of the Secretariat for Finance and Economy and any agreement concerning contributions, or any costs incurred in the previous period, is being implemented to the end. We are trying to resolve difficulties that we face in the best possible manner”, said Kovacevic.

Chief Administrator of Municipality of Danilovgrad, Dejan Vukovic, said that this municipality particularly monitors the employment issues and that in the past few years all employment has been conducted publicly and transparently.

“We also have an obligation to seek consent from sectoral Ministry of Finance for any kind of employment”, Vukovic explained.

As he said, new digitalization of administration is in the plan.

“All this follows development of a new website, which will be aimed at interacting with citizens”, stated Vukovic.

Executive Director of NGO Mladiinfo Montenegro from Niksic, Milica Zugic, explained that project “Penicillin for Corruption” indicated that there are corrupt acts in the municipality of Niksic that lead to corruption in healthcare system of Niksic municipality.

“I think we managed to scratch the surface, because a month is not enough to discover some greater issues, but it’s enough to see that something exits”, explained Zugic.

She said that during the monitoring period, healthcare institutions were visited 82 times, whereby, as she added, it was identified that actions exist that might indicate that corruption exists.

“One example is that a patient in the hall was waiting with a bag containing coffee and chocolate. She called the doctor, he came in and picked up that bag. Another example was when a patient went to internist with the chocolate and returned without it. These are small examples, but this is precisely the basis of corruption”, explained Zugic.

Representative of the NGO ‘For Village to Come Alive’, Milos Ostojic from Pljevlja, pointed out that a survey has been conducted in which 300 people took part which showed that citizens of Pljevlja municipality consider corruption to be acceptable behaviour.

“More than 70% of them do not express their willingness to report corruption in the future, because they do not trust the competent institutions. They do not believe there is cure for corruption and they think they would have bigger problems if they reported some cases of corruption”, Ostojic stated.

Executive Director of NGO Ul Info from Ulcinj, Mustafa Canka, said that the project implemented by this organization lasted five months, and that its main objective was to increase transparency of local government work in the fight against corruption at the local level.

Executive Director of NGO ATAK from Podgorica, Dragana Tripkovic, said that the project “Strengthening Youth Integrity” was aimed at strengthening personal integrity of young people aged between 14 and 18, in terms of increasing their willingness to report corruptive acts and to behave in in accordance with the Law.

“For the duration of workshops in four schools in two cities, we managed to work directly with 150 pupils. Awareness of corruption has been raised within two thousand pupils of these high schools and we hope that awareness of importance of supporting young people in the process of fighting corruption was raised as well”, Tripkovic explained.

Representative of NGO ‘Za Druga’ from Petrovac, Djordje Gregovic, said that all the countries that emerged in the former Yugoslavia are museums of corruption.

“One of key objectives of our project was to make a web platform, as a modern expression available to everyone in a simple manner. The address is www.muzejkorupcije.org and I believe that this is a good basis and an opportunity for everyone to anonymously or publicly attach exhibits for the museum, which is virtual”, explained Gregovic.

Representative of NGO Active Zone from Cetinje, Milena Stanojevic, explained that through the project “Open about Corruption”, young people were educated on what corruption is, how to recognize it, how and to whom to report it.

“During the work on this project, we have established cooperation with representatives of other NGOs from our city. We have achieved cooperation with the local administration. We also cooperated with the Agency for Prevention of Corruption, and we gave the opportunity to interested young people to visit the Agency and to get introduced with its functioning on the spot”, Stanojevic said.

Representative of NGO Civic Creative Centre from Cetinje, Marta Martinovic, explained that a coalition “Together against Corruption” was formed, consisting of four youth NGOs from the territory of Cetinje. “They signed a memorandum of cooperation and made a joint communication plan for action in the coming period,” Martinovic pointed out.