Centre for Civic Education (CCE) assesses that large majority of Montenegrin citizens remains comitted to key foreign policy priorities of Montenegro, which can also be read from the most preferred countries for living which is a solid basis for further work on their intensification.

CCE has, in cooperation with IPSOS agency, asked citizens: ‘If you didn’t live in Montenegro, which other country would you like to live in’, and findings on entire adult population indicate that a little more than third (32%) see Montenegro as only country in which they want to live, while 11% does not have attitude or doesn’t want to respond. Those who would rather see their future in some other country, state America as the most preferable one, followed by neighbouring Serbia, EU and Nordic countries, while the lesser percent of them see Russia as such, and other countries. 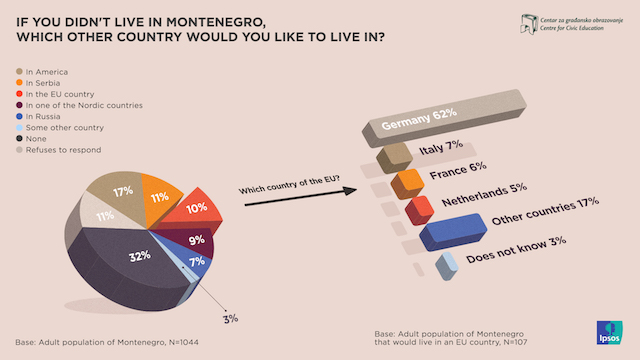 When an analysis is made of those who are determined, i.e. those who would rather live outside of Montenegro, which is a total of 57% of surveyed persons, it is the largest percent of those who see America as the most preferable option, with almost a third (29%), then Serbia (20%), followed by European Union (18%), within which by far the most popular is Germany, while Nordic countries are desired by 15%, and 13% would determine themselves for Russia. 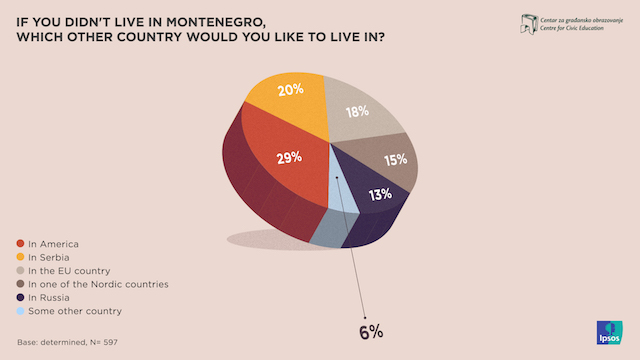 Citizens of Montenegro are in considerable amount ready to tie their future to Montenegro, while in those cases wherein they would see it in other countries, dominant are those which are based on democratic principles. It is clear that connections to Serbia remain strong, i.e. the strongest in relation to all other neighbouring countries, which is understandable considering Montenegro was in state unions with Serbia for a long time, but that even nowadays developed cooperation and traffic in various areas between these now independent countries exists, as well as numerous family relations.

Accession to NATO Alliance has contributed to trans-Atlantic integration, and it is obvious that inadequate communication of European integration process and of what occurs within the Union causes a smaller percent of citizens of Montenegro to see EU high in the list of desirables in this context. This additionally obliges Ministry of European Affairs (MEA), responsible for coordination of EU negotiation process and communication, to provide more intensively and more precisely all necessary information to citizens. Since activities of MEA in this regard are lacking, or are rather superficial, citizens do not have a clear insight in the extent of support that EU provides to Montenegro, thus consequently they form positive attitude towards the process itself but also to European Union in a lesser percent.

Broader research, within which this questions was asked, IPSOS agency has conducted for CCE from 7 to 11 November 2017, on a sample of 1044 respondents, while sample frame was adult population of Montenegro.