Centre for Civic Education (CCE) in cooperation with Coalition for RECOM, organized today a debate on the topic of EU Support to transitional justice and reconciliation in the region.

On this occasion, Daliborka Uljarevic, Executive Director of CCE, stated that ‘it is important for us to discuss on future and establishment of sustainable mechanisms in the process of reconciliation in the region on this day, and we believe that RECOM is precisely such mechanism. Incursion on Dubrovnik, at the time named ‘War for Peace’, was a defeat of conscience and consciousness in Montenegro. This deranged act, that will produce multiple human tragedies must remain a testimony that admonishes and a motive for advocating to the end for facts on events that had their victims and their perpetrators, which left a profoundly negative trace in neighbourly relations. Only righteous and brave proceedings for war crimes, individualization of the guilt, publishing of documents that testify about decisions made by decision-makers of that time, may be a guarantor of security and stability of this region in the long term.‘ Finally, she pointed out the fact that we are ‘witnesses of region being still quite easily ‘flammable’ by irresponsible rhetorics, that more recent history in textbooks either ignores or represents with nationalistic colours, and therefore regional establishment of facts is important in order to constrict space for daily-political manipulations and interpretations that strenghten certain leaders but substantialy jeopardize cooperation and reconciliation, and RECOM offers exactly that.‘ 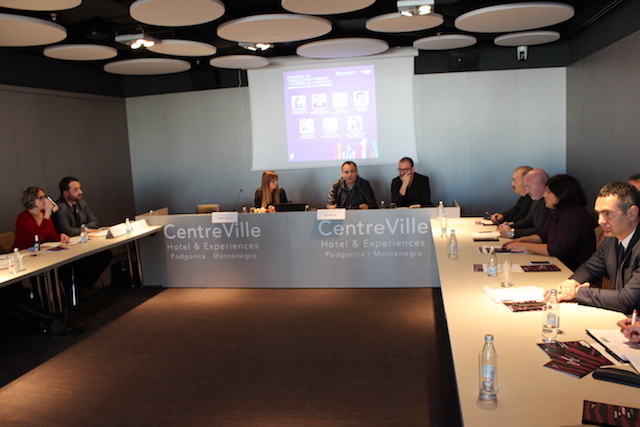 Director and advocate of the RECOM Initiative, Dino Mustafic, said that ‘in the Balkans, many collective emotions have become hysterical, and although the war was ended with bomb-shells, the war of words did not. A well-known rhetoric from ’90s, coloured by mimicry-like neo-fascists collaborating with convicts in the Hague, came back again‘. Mustafic highlighted importance of cultivating the culture of empathy as the opposite to the culture of lies and denial, and that memories must be expressed through empathy, emphasizing that RECOM is also an expression of fight against such tendencies as well as indifference. ‘In the Balkans, remembrance is selective and politically filtered, thus everyone remembers those dates on which their collectivities suffered, but all deny those dates when, due to their collectivities, those others suffered. Process, first of all of trust, and only then of reconciliation is a necessity if we want to live in a healthy European country. Nations that are indifferent to lessons of past have no future – a society that forgets what it has done only becomes forgotten itself‘, Mustafic concluded.

Igor Novakovic, a researcher of the ISAC Fund from Serbia, pointed out that ‘in addition to all economic successes that EU has, if you look deeper, the whole European project is focused on security. In that sense, it is disputable how long-term security in the Balkans would be sustainable if there was no EU‘. Novakovic recalled that in the past ‘period we witnessed various apologies but they did not bring substantial change. Therefore, it is rightly asked whether societies in our region are ready for reconciliation and what will happen if this reconciliation remains absent?‘ In all countries of the Western Balkans, there has been registered a decline in standards, lack of investments, which is an ideal basis for manipulation of emotions. ‘The whole region is fragmented, not only as a region, but each individual country is fragmented, resulting in inter-ethnic and inter-confessional disunity and thus the absence of reconciliation. Reconciliation in our region must not remain only at the political level, and it is up to us to make this step towards substantial reconciliation‘, emphasized Novakovic.

Communication Adviser in WB6 in Serbia, Ana Rudan, presented that ‘the issue of reconciliation in the Balkans is out of public discourse, especially as we with time move away from events of the past. Although reconciliation is one of four key goals of the Berlin process, there is no real progress in this area. The Berlin process itself remains apolitical, its focus is more and more economics, and there is the least progress in political linking, which is certainly not good for resolving fundamental issues such as the rule of law, security and reconciliation‘. She emphasized that ‘without determination of a forensic truth, it is difficult to transform even educational programmes, thus the issue of reconciliation and the formation of a coalition for truth must be continually repeated and emphasized.‘ 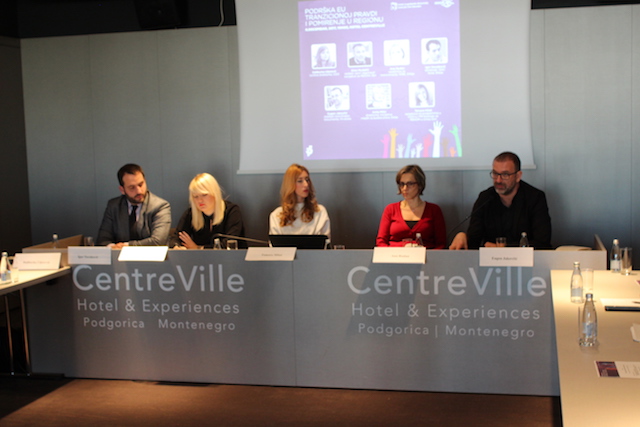 Eugen Jakovcic, Media Coordinator at the Centre for Dealing witht he Past – Documenta from Croatia, reminded that only two verdicts were passed for attack on Dubrovnik by Montenegrin reservists. ‘It is important to note that the Montenegrin prosecution for war crimes has informed the public even last year that it had begun a co-operation with the Hague Tribunal, but in the meantime, nothing has changed in this regard and the prosecution’s answer to the question of what has been done in this regard remains lacking‘ , stated Jakovcic. He also referred to the problem of Croatia when it comes to dealing with the past, and pointed out that ‘Croatia has reached the very bottom on this issue and nothing further can be expected from Croatia in this regard. If we have the entire political structure that is pro-European and, while on the other hand, all these political actors deny the verdict of the Hague Tribunal, they are in that manner deepening the ‘power of poison’ from the courtroom. This represents a major problem thereafter, and changes can not be expected with such a situation‘. Jakovcic underlined that ‘Croatia has never faced up with war events in B&H, and this is another devastating fact. Victims who went through camps from this territory now have a satisfaction because, when it comes to war events, it is about individual responsibility, and all politicians say it is a process against one nation, one state, and it is eroding also the RECOM Initiative itself‘.

Anita Mitic, from the Youth Initiative for Human Rights from Serbia, assessed that situation in the Western Balkans is not at all easy, and that positive developments can only be achieved through establishment of RECOM, which can greatly contribute to the process of dealing with the past. ‘What can furtheron happen to the region if there is no reconciliation – represents a matter of crucial importance for progress. If no changes occur in the region in this regard and if it remains the same as it is today, such situation will be detrimental to generations of young people who are coming. It is precisely these generations that have lost co-existence with their peers from the region, and most of the recent research suggests that young people from the Balkans are full of hatred and intolerance, as they do not have a clear image about war events of ’90s. Additionally, education system also does not help herein, because textbooks are lacking data and facts on this issue, and in this manner young people are being offered history based on false myths‘, she concluded.

Furthermore, during discussion, Special Prosecutor Lidija Vukcevic reminded of the work of Special Prosecution in regards to war crimes and pointed out that the Strategy for investigation of war crimes was adopted. ‘So far, six cases have been prosecuted, evidence has been gathered, and an indictment has been filed. Montenegro was fortunate enough to have no large number of war crimes cases, but nevertheless agreements were concluded with prosecutions in the region in order to deepen cooperation in this area. From the day of adoption of the Strategy, cooperation also with the Hague Tribunal was intensified, by the means of which our people stayed there and searched their evidence database wherein Montenegrin citizens appear as perpetrators of the offense’, stated she.

RECOM has been recognized by the bearers of Berlin Process from the EU as a unique regional mechanism that directly contributes to regional cooperation, reconciliation and strengthening of the partnership between decision-makers and civil society, therefore representatives of the Coalition were invited to make recommendations for further steps at the Trieste Summit, and have done so. Since regional cooperation and good neighborly relations are a political requirement for integration of each individual country, the EU relies on establishment of RECOM as a prerequisite for sustainable regional cooperation. In this respect, support of the countries of the region for this initiative will be valued in the framework of fulfillment of political criteria, in terms of commitment to regional cooperation and good neighborly relations. The messages and encouragement that RECOM received in Trieste is a motivation to work on signing of the intergovernmental Agreement on establishment of RECOM during the Berlin Process at the London Summit in 2018.

Debate EU support for transitional justice and reconciliation in the region was organized within the new advocating phase of the Coalition for RECOM, with support of the European Commission and the Rockefeller Foundation, which succeeded in positioning the establishment of RECOM within the framework of the Berlin Process. Furthermore, symbolically, debate was organized on 6 December, the day when 26 years ago escalated attack by the Yugoslav National Army (JNA) and Montenegrin reservists on Dubrovnik, in an effort to contribute to establishment of a culture of remembrance.