FAST FORWARD 2017 is being realized with the support of the Commission for Allocation of Part of Revenues from Games of Chance of the Government of Montenegro, the Canadian Embassy, the Heinrich Böll Foundation, the Embassy of Italy, the Embassy of Israel, the US Embassy, as well as companies Metropolis, Studio Mouse, Post of Montenegro, PG Taxi and Compania de Vinos Montenegro. Partners of the Festival are PI CIC ‘Budo Tomovic’, BELDOCS, Sarajevo Film Festival, CC ‘Nikola Djurkovic’ from Kotor, Municipality of Kotor, Municipality of Berane and Centre for Culture Berane, while media sponsors are public service RTCG (TV and portal) and Vijesti (newspapers and portal). 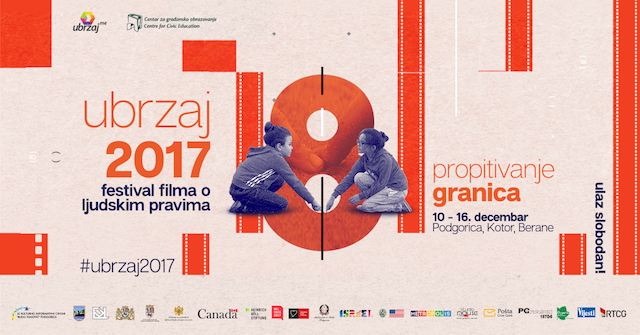 ‘Imaginative, impenetrable, blood-soaked, fluid, natural, conventional, insurmountable, open or fenced with barbed wire – borders are dancing everywhere around us. Between our own bodies and bodies next to ours, life and death, sea and sky, inside and outside, speakable and beyond language – we are questioning, establishing, burying ourselves into them, or yet crossing them throughout the entire course of our existence. On the borderline, we show who and what we are, that is where we begin or cease to be. Borders define us and we define borders.

That is also the case with the selected films of the VIII FAST FORWARD Human Rights Film Festival. There has never been a wider choice of the most recent feature films from the region and the entire world, which offer us, each in their own way, a different perspective on topics and problems that shape our contemporaneity. They help us to feel, understand, get to know and recognize infinite ways of being human.’, wrote Paula Petricevic from FAST FORWARD 2017 Festival team in the introductory of catalogue of the Festival.

The VIII FAST FORWARD Human Rights Film Festival 2017 brings the so far richest selection of movies that creatively, strongly, poignantly and emotionally tell stories on the importance of the fight for human rights, human dignity and persistence from the perspective of the films’ authors. These movies cannot leave you indifferent, hence the motto of this year Festival is QUESTIONNING BORDERS.

At the Festival, on 10 December, on International Human Rights Day, two films will be screened in Podgorica. From 17:30h, as an introduction to opening ceremony of the Festival the film ’The Unforgiven’ by Danish director Lars Feldballe-Petersen will be screened on the Grand Scene of the CIC ’Budo Tomovic’. After that, from 20:00h,  screening of the film ’The Frog’ begins, of this year’s winner of the Audience Award at the Sarajevo Film Festival, by Bosnian director Elmir Jukic, who is also the guest of the FAST FORWARD Festival and who will address the audience after screening of the film.

On Monday, 11 December, in the Dodest Scene of CIC ’Budo Tomovic’, four films will be screened, as follows – at 16:15h film ’Mathias’, by Austrian director, Clara Stern, which follows a story of a transgender man who faces his ’new’ identity and everything that this identity brings. Afterwards, from 17h, the Macedonian film ’Amok’ follows, a cruel and painful story about teenagers from the juvenile adoption centre, directed by Vardan Tozija, who will also be a guest of the Festival. At 19:15h film ’Custody’ is on the repertoire, by French director Xavier Legrand, which won the Best Director Award and Best Debut Film at this year’s Venice Film Festival. At the end of the second Festival day, at 21:00h the film ’Karl Marx City’, by director’s duo Petra Epperlein and Michael Tucker, will be screened, which talks about life in East Germany and the Stasi’s investigation of the family member’s past.

On Tuesday, 12 December, at 16:15h, film of the Hungarian director Roland Vranik, ’The Citizen’ is on the programme, which is a moving story about an African, an immigrant who has been trying to fit into the Hungarian society for years. Afterwards, from 18:30h, the screening of the film ’Agape’ follows, by the Croatian director Branko Schmidt, whose starring actor Goran Bogdan and film producer Stanko Babic will talk to the audience after the screening. The third day, starting at 20:15h, will be closed by the Iranian drama, ’A Man of Integrity’, directed by Mohammad Rasouloff, who received the Un Certain Regard prize for this achievement at the Cannes Film Festival.

On Wednesday, 13 December, the programme features three films – from 16:00h, the movie ’Un Bacio’ of Italian director Ivan Cotroneo, who brings us a story about love, friendship, growing up, peer violence and homophobia. Then, at 18h, the film ’Siblings’ is on repertoire, directed by Markus Mörth, who talks about a refugee journey and hopes for a better tomorrow. At the end of the third day of the Festival, from 20:30h starts a film of American director Craig Atkinson ’Do Not Resist’ that won the Best Documentary Award at the Tribeca Film Festival.

On 14 December, the last Festival day in Podgorica, documentary film ’Life Animated’ will be screened at 17:00h of Roger Ross Williams, about an autistic boy who is expressing himself through learned lines and situations from favorite animated films. The film ’Between Borders’ of Jelena Gavrilovic and Mirko Rudic follows at 19h, after which screening,  the film director Jelena Gavrilovic, editor Natasa Pantic and producer Igor Mitrovic will address the audience. The eighth edition of the FAST FORWARD Human Rights Film Festival 2017 in Podgorica will be closed by screening of the film ’Foxtrot’, an Israeli candidate for the prestigious Oscar award, by director Samuel Maoz.

FAST FORWARD Human Right Film Festival 2017 will have its parallel editions also in Berane and Kotor. The Berane edition, on 11 December, will be opened with the screening of the film ’Mathias’ and by this screening the FAST FORWARD films will for the first have their presentation in one of the schools in Montenegro. Later on, at the Cultural Centre a documentary film ’Life Animated’ will be screened from 18h and from 20h film ’Un Bacio’. The following day, on 12 December, the programme will feature the film ’The Unforgiven’ from 18h and ’A Man of Integrity’ from 20h.

A novelty of this year’s edition of the FAST FORWARD Festival is creation of a special programme of films intended primarily for young audiences, since to a certain extent, films from this part of the programme also deal with topics and problems close to their age, while on the other hand the universality and complexity of problems dealt by those films are close and comprehensible to every individual. In this section of the programme there are films like ’Mathias’, ’Amok’ ’Un Bacio’, ’Life Animated’.

CCE will aslo this year, at the opening of the Festival, present annual awards for affirmation of human rights and civic activism, which have become one of the features of the FAST FORWARD Festival, whose objective is to contribute to the recognition and empowerment of those who give themselves selflessly in efforts to make Montenegrin society better and that the universality of human rights in it is not being called into question.

Detailed Festival programme and all additional information can be found at the website http://ubrzaj.me/, while entrance to all screenings, in all three cities, is free of charge. Official trailer of FAST FORWARD is at the following link https://www.youtube.com/watch?v=lYPQqjswJQk