On the occasion of 27 February, with 25 years from the crime in Strpci, the Centre for Civic Education (CCE) reminds that families of victims are still waiting on remains of the murdered ones as well on the court justice since this crime has not been adequately resolved or processed until this day. 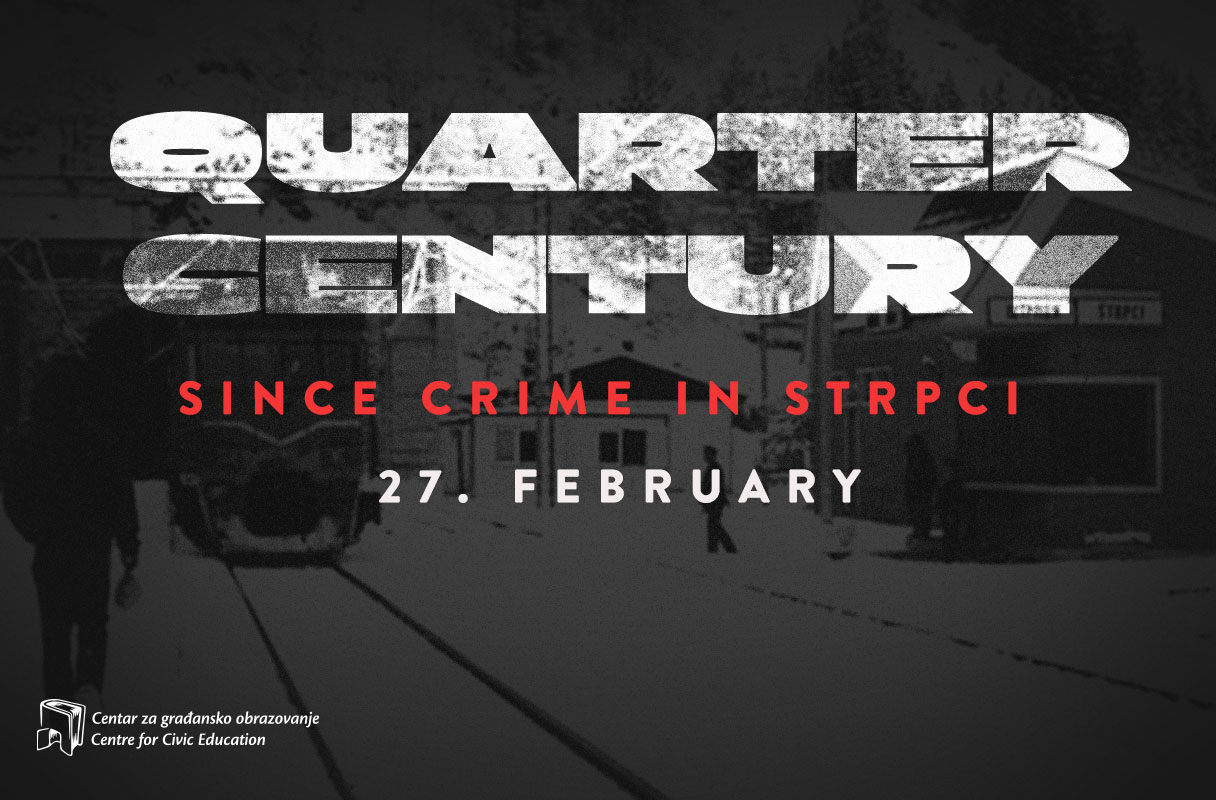 Only Nebojsa Ranisavljevic and Mico Jovicic have been legally convicted for crime in Strpci so far. Nebojsa Ranisavljevic was convicted to 15 years of imprisonment, in the proceeding conducted before the Higher Court in Bijelo Polje, wherein it was determined that crime was planned and conducted by members of Visegrad Brigade ARS, led by Milan Lukic, but with the knowledge of also representatives of state organs of FRY. Ranisavljevic has during execution of the kidnapped passengers kept watch, and when one of them attempted to escape he wounded him. Mico Jovicic has confessed before the court in Bosnia and Herzegovina to participating in beatings of civilians and keeping watch during their kidnapping from the train and liquidation, and concluded an agreement on confession of guilt with the Prosecution of BIH in 2016, on the basis of which he was convicted to five-year imprisonment sentence. Trial for ten of defendants is currently ongoing in BIH, among whom are some of leaders.

Until today, in this case, as in other proceedings relating to war crimes, command chain responsibility has not been processed, while the convicted were at the end of it and could not be conducting acts for which they were convicted without knowledge and approval of higher command instances. Determination and processing of command responsibility remains out of interests of judicial organs, to which numerous international experts and organisations have been pointing out.

Although this crime has been executed outside of borders of Montenegro and by persons who are not nationals of Montenegro, we remind that ten of kidnapped were from Montenegro, which indisputably creates an obligation of relevant institutions in Montenegro to actively involve and give their full contribution in the process of criminal persecution of perpetrators and their instructors, as well as to search for remains of the perished passengers.

Regional cooperation in the area of war crimes is essential, especially when it comes to fight against impunity of war crimes, in order to reach the efficient processing of all suspects regardless of the state they are residing in, but also in order to contribute to reconciliation. Precisely the new Strategy of the EU for Western Balkans accentuates adherence to regional cooperation and well-neighbourly relations, for the purpose of improvement of conditions for faster accession of the countries of the region to the Union.

It is a duty of all of us to contribute to establishment of transitional justice and returning the dignity to victims. CCE will, individually or as a referent organisation of the Coalition for RECOM, continue to conduct activities with the purpose of establishing the culture of remembrance, so that war atrocities and victims of war crimes are not forgotten, and it will simultaneously insist upon the authorised to process the responsible ones for committed crimes.

Tamara Milas, CCE Programme associate and Spokesperson for Coalition for RECOM in Montenegro