Centre for Civic Education (CCE) and Coalition for RECOM have organised today, on the occasion of International Day of Peace, a debate under topic Dialogue and reconciliation – where are we now in the region?.

On this occasion, Daliborka Uljarevic, CCE Executive Director, assessed that ‘wars waged on the territory of former Yugoslavia in 90-is do not have winners and losers as an outcome, each of the sides has their own certain truth about those wars, and political expressions even today suffer more or less from consequences of these conflicts.’ She reminded also that Initiative for RECOM in Montenegro had a continuous political support. ‘This support to RECOM from the highest political level in Montenegro is a serious capital which should be further valorised, since in the contrary it will not value much. In this regard, I believe that Montenegro can and should take up an even more proactive role in the region especially taking into consideration its good positioning among neighbours and the fact that this an issue which goes beyond the borders of solely one political and social structure, that this is an issue which exceeds particular interests. It is indisputably a public interest both of Montenegro, and the region as well, to establish the RECOM’, concluded Uljarevic. 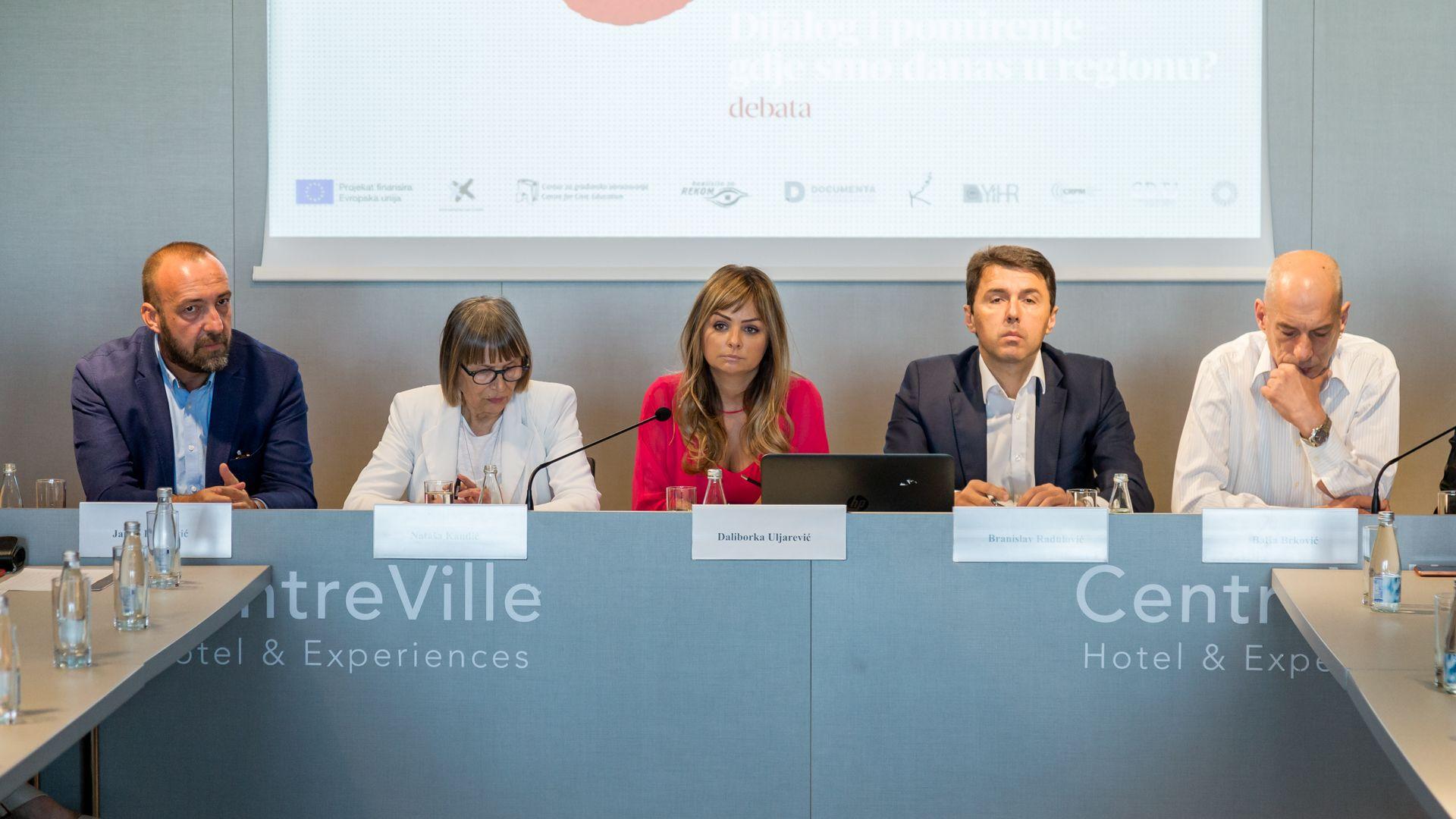 Natasa Kandic, President of the Humanitarian Law Centre (HLC) and the initiator of the Initiative for RECOM, said that situation in the Balkans is such that ‘we are still in the years when the individual memory of the war-past which is behind us prevails. On the other hand, collective remembrance in the Western Balkans is built within only one ethnic level and remains closed in it. The Coalition for RECOM is trying, with clear methodological bases, to break through the ethnic boundaries by offering, as an instrument, a commission that transcends ethnic boundaries and by influencing the building of collective remembrance, which is the remembrance of war crimes that will remain present forever. The final outcome of everything should be public acknowledgement of civilian casualties, and this cannot be achieved without the support of countries of the region and institutions of the system within them, and that is why we are persistent to convince the leaders of the Western Balkans that this process is in their hands.‘

‘Our goal is for all the victims in the territory of former Yugoslavia to be known by name and surname, to be known that the lost lives were those of civilians, and not only them, soldiers and police officers as well, and ultimately, all those who have participated in the conflicts. These documents must be made permanent because in that manner the same cannot be denied through the facts‘, she emphasized.

Balsa Brkovic, writer, said that ‘on the territory of the former Yugoslavia it is necessary to have a precise mechanism, with no space for manipulation of the same, in order to come together to a certain form of reconciliation. Obstruction to this represent certain political elites, which do not want to resolve any problem, and this represents a phenomenon of the unprocessed past. Again, this phenomenon is not possible to be achieved without the suspension of memory that is required of people.’ He also pointed out that due to the current ‘ecstasy of media civilization‘, it does not matter whether certain information is true but whether is it attractive. ‘In the time of light sensations, in the time of attractions at every step, it is easy for an individual to opt for some kind of suspension of one’s own memory and remembrance, which is dangerous‘, Brkovic warned.

‘Transition from individual memory to something that is collective remembrance must rest on a clear awareness of events. It is not enough just to enlist the victims without any ethnic or other preferences, it is necessary to create an image of the events that will not be brought into question and that will function throughout the entire region. The Coalition for RECOM is a concept that enables a true insight, and a true insight allows for some kind of new functioning in the region. Therefore, I believe that reconciliation truly is the only way, because we must not leave an unprocessed past to return to us in an uglier form‘, Brkovic said. 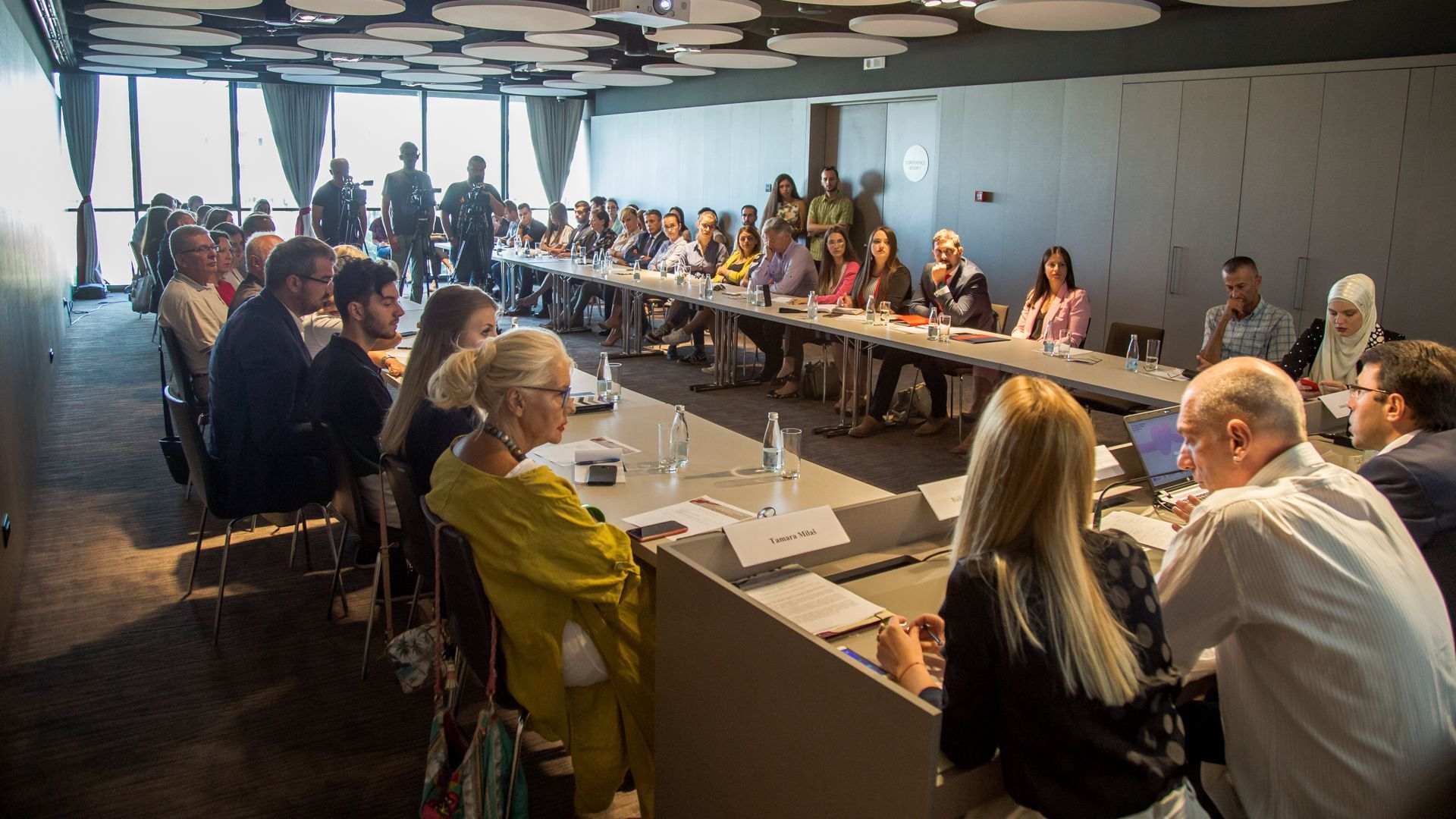 Janko Ljumovic, professor at the Faculty of Drama Arts of the University of Montenegro, stated that art and culture are ideal mediums for making certain trauma of the social community, individuals or collectivities in one society not only visible, but also to, through art and culture, provide this necessary transfer of experience or content that can lead to what is very important – and that is a matter of empathy. ‘The Western Balkans’ Europeanization, i.e. the issue of how to make possible locally the principles of universal transitional justice as cosmopolitan justice, is an open issue that has achieved its global visibility after the harsh and bloody nineties of the 20th century. We are even nowadays witnessing that in the wider European area, the issue of facing the past is important and this is not a closed story‘, he said. He also pointed out the role of theatre and drama art as an important factor in the building of collective remembrance, and the possibility that art could be used as a medium for social change. ‘We still live the time of post-heroes. Many war criminals, even though it could be seen long since that they were only common war profiteers, are actually still heroes in the local context. And it precisely they who produce those divisions which are reduced to the division of ‘we and they’. It is therefore important to insist on the role of art and culture in these processes and this field must be affected by certain policies and strategies‘, said Ljumovic.

The President of the Lawyers’ Association of Montenegro, Branislav Radulovic, noted that something that was previously a mantra of war was taken over as peace and stability and became the mantra of all official policies in the Western Balkans. ‘We cured the consequence of the war, but we did not cure the cause. Currently, the thing that is happening to us now is absolutely the same thing that was happening in that communist Yugoslavia in the seventies. Here, this civic liberal and democratic movement did not succeed, not only it did not become dominant, but is at the verge of survival. In Montenegro, the process of building a democratic society did not go through, there was no lustration, court procedures were not completed. RECOM, along with the Igman Initiative, is the only indigenous, living movement of free individuals who still do not allow the suspension of remembrance to occur. The role of the Coalition for RECOM is not to allow the suspension of remembrance, and this is the last line of defence of values.‘ He concluded that in the further process of establishing RECOM, the support of political structures is necessary, and that significantly different climate would be in the region if the idea of constitutional patriotism was strengthened.

Today’s debate gathered around 50 representatives of various social sectors and was followed by a discussion of participants after the opening remarks of panellists. It was organized within the regional project Activism of civil sector for reconciliation in the region of the former Yugoslavia – support to the RECOM, which aims to strengthen the prospects for regional reconciliation in the Western Balkans by establishing facts about war crimes, human losses and places of imprisonment related to post-Yugoslav wars of the nineties.