On the occasion of the International Tolerance Day, the Centre for Civic Education (CCE) highlights that the path to establishment of society of tolerance and equality is long and requires lots of efforts and devotion of all segments of society.

Tolerance implies freedom of expression and enjoyment of different identities and world-views which in mutual communication construct harmonious relations, prevent violence and promote culture of peace. Tolerance is often and wrongly being equated with withstanding, endurance, refraining from violence and discrimination, but tolerance must be an active position and a conduct which contributes to affirmation of human rights. Simultaneously, it is important to emphasize that tolerance of social injustice or its justification is unacceptable. 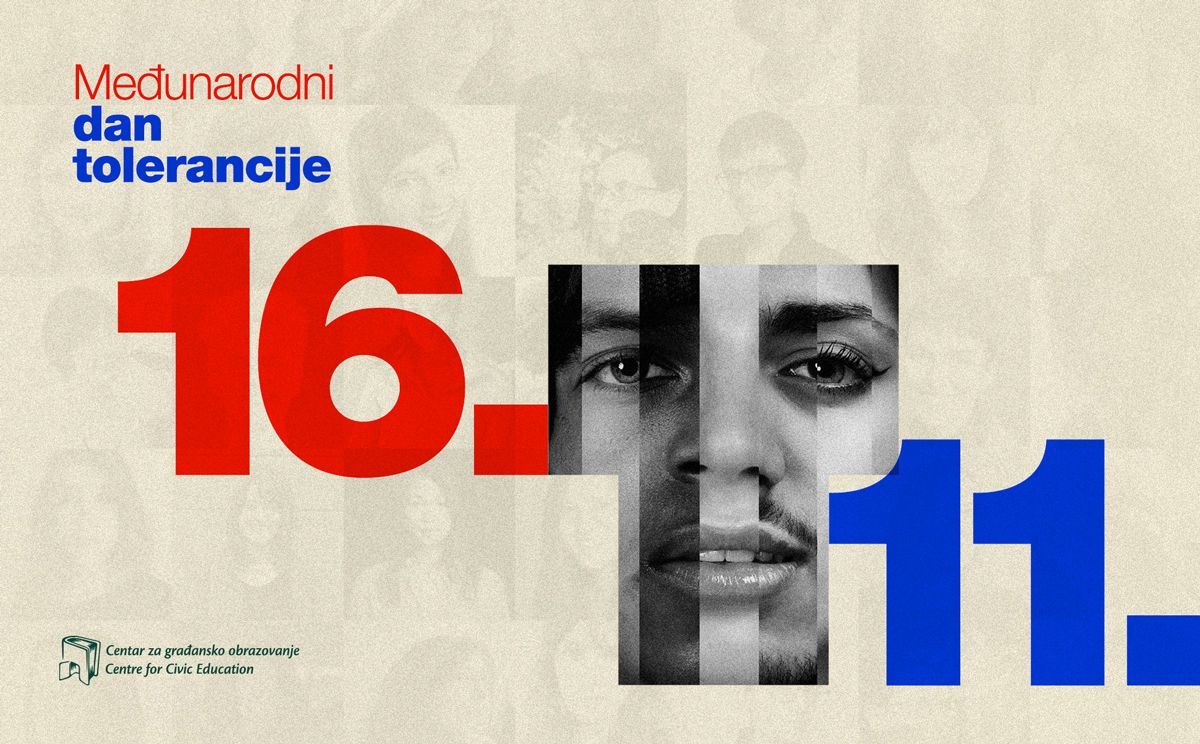 Tolerance is a value which is to be built constantly with reliance to human rights and freedoms, and it can always easily be jeopardized. In addition to the laws and institutions which directly ensure protection of rights, constant investment in development of upbringing and education of new generations in the spirit of understanding and tolerance is necessary.

Montenegrin society is still far from society which can be deemed to cherish tolerance as a key value and principle of functioning. There are numerous citizens, members of different groups who are still excluded from society, are living on the margins and have no equal access to resources of society and equal possibilities to participate in the community life and decision-making which are important for them and the future of community they live in. And a society in which members of sexual minorities, persons with disabilities, impoverished, ethnic groups such as Roma and many other citizens are facing prejudices and non-acceptance, have no equal position in society nor proper life standard, represents a society of declarative rather than practical tolerance.

Tolerance is learnt through the broadest social context, it is learning through life in school and broader social environment which respects the principle of respect for other and different, nurtures the culture of dialogue and different opinion and attitudes. Education plays dominantly important role in setting the foundations on which a stable societyis builtwhich perceives the tolerance not as rational and calculated acceptance of differences, but as a genuine value which is lived as one true approach to joint life in an open society.

CCE estimates that promotion of this important educational concept and its role in development of values of freedom and anti-discrimination is not worked on sufficiently thought-out and in principled manner today in Montenegro. The recent reforms, which have abolished Civic Educationas mandatory subject in schools, have made a step back in overall democratic reform of the country. Limiting children and youth to acquire social, civic and inter-cultural competences, adopt democratic values and understand fundamental rights, is in long-term impeding the social inclusion and establishment of tolerance in society.

It is concerning that the results of research of youth attitudes indicated the ever greater closeness of this group towards differences in society and its acceptance, the ever greater social and ethnic distance and inveteracy of homophobia, traditionalistic and authoritarian attitudes of youth. On the other hand, the dimensions of apathy of youth and their disinterest for active participation in construction of trust in society, political activism and volunteerism are alarming. These should have been indicators for educational authorities to consider strengthening of civic education, and not to reduce and abolish it.