Centre for Civic Education (CCE) has today, within the programme Let’s put corruption into museum! signed contracts with civil society organisations (CSO) which were awarded funds via second call for support of projects of these organisations in Montenegro in 2018. Through this call, three new projects were supported in the total amount of 27, 749.63EUR, and these organisations will, in the following period, through their activities, strive to contribute to participation of civil society in implementation of anti-corruption policies and practices in Montenegro at the local level. 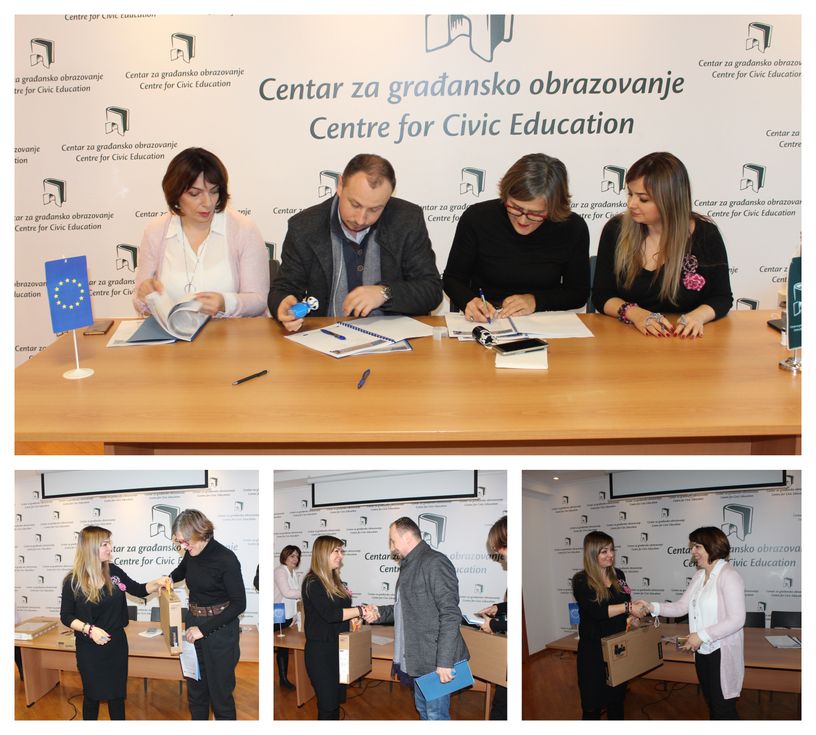 The following projects were supported:

Within the capacity building of organisations which will in the forthcoming period, through the supported projects, deal with prevention and fight against corruption in their respective areas, representatives of these organisations were, after contract signing, delivered laptops as part of additional technical support. Also, these organisations will undergo training on management of projects financed from the funds of the European Union, as well as on tools which could be used to enhance the project visibility.

The programme Let’s put corruption in the museum! aims to contribute to reduction of corruption at the local level and increase of involvement of citizens of Montenegro in the fight against corruption at the local level. It is envisaged to influence the increase of transparency of work of Montenegrin municipalities, via direct cooperation of CSOs, state institutions and citizens, as well as the implementation of anti-corruption policies. The programme Let’s put corruption in the museum! is conducted by CCE in cooperation with NGO Centre for Monitoring and Research (CeMI), NGO Bonum from Pljevlja, NGO UL-Info from Ulcinj and NGO Za Druga from Petrovac, in cooperation with the Ministry of Public Administration and Agency for Prevention of Corruption, with the support of EU Delegation to Montenegro and co-financing of Ministry of Public Administration of Government of Montenegro.